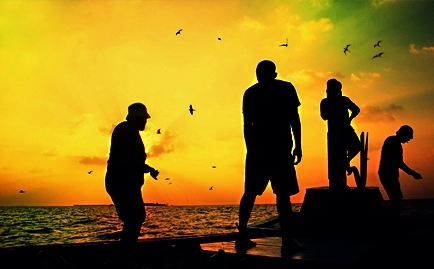 In hopes of becoming spiritually prepared for Easter, a few years ago the members of my young adult Sunday school class decided that we would celebrate Lent collectively by fasting from noise. Our Sunday school teacher didn’t expect us to stop listening to all noise, just the kind our ears enjoyed hearing like music, movies, television, radio, CDs, and concerts. Mr. Randall believed that ridding our lives of pop culture’s noise and embracing silence eventually would leave our hearts and minds with nothing better to do than to think about Heavenly things. However, after living without the world’s noise for six days, I wasn’t so sure. Though the silence rarely caused me to think about Jesus, I did ponder Heaven a good bit, mostly as I contemplated whether or not I wanted to hurt myself to get there. By day 16, I needed to hear noise so badly that a host of voices formed a circle inside my head. I ignored the voices until they invited me to go with them to see Crouching Tiger, Hidden Dragon at the dollar theater. We all sat together. As soon as the first preview started, Lent was over for me.

Even though I’ve been a Christian since I exited the birth canal, I haven’t always practiced Lent. My family and I belonged to a conservative Baptist church, so I grew up believing that Lent was like St. Patrick’s Day, a pagan holiday that only Catholics and diehard Episcopalians celebrated. The closest I came to acknowledging Lent was eating pancakes for dinner on the evening before Ash Wednesday. My grandmother called that Tuesday Pancake Day, which I learned later, was basically Fat Tuesday’s homeschooled virgin cousin.

I was twenty-seven the first time I fasted during Lent. Three days in, my parents found out. As the three of us prepared to eat dinner, I made the mistake of declining my usual sweet tea.

“No, I’m sacrificing sugar for Lent.”

My parents’ faces turned sheet white as if I’d just confessed to being a warlock or a trick-or-treater. Mom and Dad were still getting used to the fact that their only son was unequally yoked with Christians who didn’t have a problem with female pastors or male pastors who wore robes and collars. They weren’t prepared to hear about my involvement with Lent.

“Then why are you giving up sugar for Lent?”     “To help me focus on Jesus.”

Crossing her arms, Mom made it obvious that she was not satisfied with my answer. Which was unfortunate, because if she didn’t like my “Jesus answer” for why I was fasting from sugar, she was definitely not going to like my “get a six-pack before the summer swimsuit season answer.” Truthfully, the second answer wasn’t as shallow as it sounds. Since I was new to Lent and fasting, garnering a six-pack was like an added incentive just in case my desire to focus on Jesus wasn’t enough. But even with two value-added prizes waiting at the finish line for me, denying my desires for KitKat bars, Ding-Dongs and Fanta grape soda was harder than I expected. Thirteen days into Lent, I quit meditating on Jesus and the thought of me with a six-pack by eating a cupcake.

The following year I fasted from caffeine. I resisted the lure of Starbucks for eighteen days.

A couple days after seeing Crouching Tiger, Hidden Dragon, I ran into my friend Ruth, one of the assistant pastors at my church. Having heard about my Sunday School’s fast of noise, she asked me how it was going.

She laughed “Neither am I, Matthew. But who is?”

“I don’t know, but I bet I’m the only one member of my class who fasted from noise by seeing Crouching Tiger, Hidden Dragon.”

“Oh, that’s funny. I stopped fasting for Lent years ago. And now I love Lent.”

“Nope. I practice Lent by cooking! I know it sounds strange, but during Lent, I spend a couple days each week in the kitchen cooking something big, hearty, and Italian. Two nights a week I invite people over to the house—family, friends, church members, sometimes strangers—and we eat, drink and engage in good conversations. It’s fun, and really, it’s changed how I think about and engage the Lenten season.

“Matthew, don’t tell your Sunday school teacher I said this, but I think going to see Crouching Tiger, Hidden Dragon was the best thing you could have done. That movie is the kind of noise that makes you feel something. If I were you, rather than resisting all noise; why not pursue embracing the good kind of noise? That seems like a lovely way to practice Lent—filling your soul with good art and music.”

In a short conversation, Pastor Ruth changed my perspective about Lent. A few days later, I took the afternoon off from work and spent three hours soaking up Picasso’s Blue exhibit at the National Art Museum. The following week, I sat in the tenth row at the National Theater and felt Les Miserables for the first time. During those remaining days of Lent, I saw Joan Osborne at the 9:30 Club, heard one of my favorite deejays spin electronica at a hipster bar in Georgetown, and visited the Holocaust museum. And then on the last evening of Lent, I sat with friends on a blanket in the middle of a grass field. As we sipped cabernet from clear plastic cups, we laughed, shared stories, and then my friend Lisa played guitar as we sang church songs until the early hours of Easter morning. I felt so alive in that moment. When we ran out of hymns, we started singing Elton John songs. I think it was during a chorus of “Candle in the Wind” that I began to wonder if what we were doing was an acceptable manner in which to celebrate Easter. However, looking back, I don’t think we celebrated Easter. I’m inclined to believe we experienced it.

In his latest book—Hear No Evil: My Story of Innocence, Music, and the Holy Ghost—one of the stories Matthew Paul Turner shares is about his move to Nashville in hopes of becoming the “Michael Jackson” of Christian music. Follow Turner at Twitter.com/JesusNeedsNewPR.

The Reality of American Idol