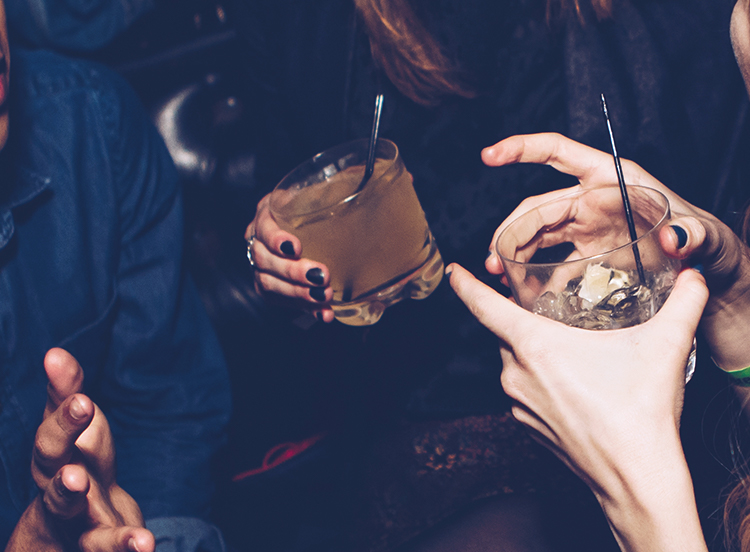 Why I started drinking.

And then something happened: I got rejected. Suddenly, my sense of worth was lost, and I became apathetic toward my drinking habits. Drinking hadn’t added value to me, so I continued drinking because I felt like it didn’t make a difference anyway.

My attitude toward drinking stayed the same for many years: I just didn’t care. I drank sporadically, innocently, responsibly (for the most part), without ever giving it much thought. Eventually I learned my limits and refined my tastes, and drinking simply morphed into something I did for fun at social gatherings.

I am not superhuman.

A year ago, I found myself in a class full of people courageously standing at the front of the room to share story after story of how alcohol played a part in their lives. Before that day, if someone had asked me: “Does alcohol have the potential to destroy lives?” I probably would have said: “Yeah, sure,” without any real knowledge to back that up. But that day, I listened to firsthand experiences of so many of my peers who opened up about how alcohol had devastated their lives, their families and their past.

Those stories made me look around and realize I am not any better than any of these people. What made me think I was so smart, so holy, so careful that what happened to them could never happen to me? I realized I am just as susceptible to the devastation of alcohol as they were. Those stories swirled around in the back of my mind every time I ordered a drink.

I have a responsibility.

Anyone who knows my story knows that my life drastically changed six months ago (and I wrote about that moment here). The main thing that changed was my rekindled love for God and my deep desire to know Him more. In late December, as I wrote down my goals for the new year, the words “Know God More” were in bold at the very top of my list.

One night as I was falling asleep, a thought suddenly dropped in my heart:

If I say my greatest desire is to know God, to develop my personal and intimate relationship with Him, and fine-tune my ability to hear His still, small voice, then how can I willingly participate in an activity that physically dulls my senses? Wouldn’t that just render my ability to hear and know Him all but useless? If I truly believe that knowing God is at the top of my priority list, then drinking alcohol can’t be part of who I am.

Strangely, conviction alone wasn’t enough to keep me from the desire to drink. It wasn’t like this newfound revelation made me hate the taste of drinks I’d grown to like, nor did it cause me to have disdain for the social atmospheres I participated in.

One morning soon thereafter, I read Ecclesiastes 10:1: “Dead flies putrefy the perfumer’s ointment, and cause it to give off a foul odor; so does a little folly to one respected for wisdom and honor.”

In his commentary, Matthew Henry had this to say:
[lborder]

True wisdom is true honor, and will gain a man a reputation, which is like a box of precious ointment, pleasing and very valuable … the reputation that is got with difficulty, and by a great deal of wisdom, may be easily lost, and by a little folly.

…
Those who make a great profession of religion have need to walk very circumspectly, to abstain from all appearances of evil, and approaches towards it, because many eyes are upon them, that watch for their halting; their character is soon sullied (defiled, tainted), and they have a great deal of reputation to lose.

Immediately, I was more than convicted. I was convinced.

Why I Quit Drinking

In that moment, I realized the incredible responsibility I have, as Henry said, “… to walk circumspectly, to abstain from all appearances and approaches towards evil …” because there is a great deal to be lost should I make the wrong move, and there is a great deal to be gained should I make much of my call. I’m convinced I am to lay drinking down because I am convinced of what God has placed on my heart and life to do.

As a Christian, I have a responsibility to people. I feel the weight of that—not as a burden, but as a joy—that God trusts me enough to put people across my path to share the good news of the gospel.

Knowing the destructive capabilities of alcohol, knowing that I am not a superhuman who is immune to the potential of falling into that destruction and knowing the command of God on my life to share the gospel, these were enough to compel me to a final answer.

Wherever we are, whatever we’re doing, God has given each of us a platform, a people and a purpose. No matter how big, small or non-existent we think our platform is, we all have people come across our path who are hungry, lost and broken. We all have to decide what we’re willing to risk and what we’re willing to lose for the cause of Christ.

I decided that my platform wasn’t going to be one where I could have Jesus on my heart and a drink in my hand. I don’t believe it is a sin to drink alcohol. I don’t even believe every Christian needs to come to the same conclusion I did. But I do believe we all need to take a look at our lives, and understand the responsibility we have: to use well the gifts God gave us, to step in to the call he commanded us and to reach the people He entrusted us.

Why Is It So Hard to Pray?