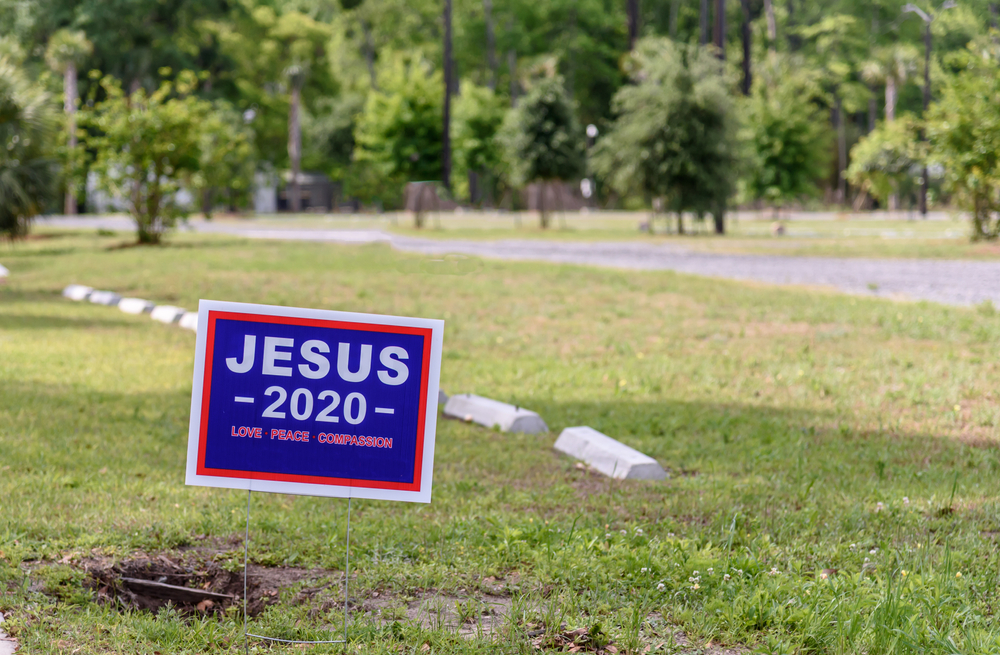 In response to the backlash from young Christians, and the widespread political division in the church, many public leaders try to avoid the topic of politics entirely. Lobbing a claim of “getting political” communicates that someone is unnecessarily divisive, harboring ulterior motives, or stepping outside the bounds of their role.

We’re so averse to the “political” that we’ll deny our involvement in it even from one of the greatest seats of political power in the world.

Political is practically a dirty word. It’s constantly pitted against the gospel, as if anything political stands in opposition to mere faithful living. We haggle over what counts as a political issue—marking out boundaries that include the issues we’d rather avoid and including all the ones where disagreement won’t be tolerated. We even proudly declare issues that require legislative solutions as “not political” when we think they should be supported by everyone. We conflate “political” and “partisan,” and we isolate legislative and electoral means of social engagement as the only ones tainted by sin.

Any human system will have its flaws, and no human system should receive our ultimate loyalty. We will be sorely disappointed if we put our hope in fallible and imperfect institutions. Government systems—local or national—suffer the same effects of sin that any other human system does. Instead of isolating them as lower, grungier places of human activity, we should recognize them as spaces to live into our creative capacity as humans.

When I tell new friends that I write about faith and politics, they are almost universally enthusiastic. “Oh, we need Christians doing that!” “Bless your heart, that’s important.” “What necessary work!” The conversation usually ends there. We all think in theory, that talking about the relationship between our faith and political participation is important, but very few actually want to have the conversation. We love the idea of hard and messy conversations, but we’re usually afraid to take the risks involved in actually broaching these topics with the people around us.

Perhaps surprisingly, this impulse toward maligning the political is actually consistent with the political legacy young evangelicals have inherited. The common criticism of the Moral Majority and Religious Right is that it made the Christian faith “too political” by tying our faith to political positions. But perhaps the problem with too closely aligning our faith and a particular strain of conservative politics isn’t that the movement was “too political,” but that it was actually insufficiently political.

Instead of directly dealing with the complex questions of sorting out what our theological convictions look like in public and seeing our political education as part and parcel of our theological education, we’ve outsourced. We’re afraid of “getting political”— but we aren’t afraid of letting others do the “dirty work” for us. Many of our leaders have — implicitly or explicitly— communicated that there are a set of approved conservative sources that will give us the guidance we need—not just in policy details, but in the kind of philosophy that should motivate our participation.

That’s why the history is important: we solidified a relationship that was meant to be useful to deal with immediate political concerns, but it turned into a dependent relationship on an outside source for education about our ultimate values.

Even when we recognize the role of Christian leaders in guiding our political training, we still place our political education on the shoulders of Christian parachurch organizations. During my time working for a local church, we hosted an event that was advertised as a series of simulcast talks intended to spark conversations about our cultural moment. It was broadcast all over the country, into local churches that were offered simple guidelines on how to host the event. Many of us on staff were excited to introduce the congregation to topics that we knew they would otherwise avoid, like race, economics, and politics.

At the end of the night, we realized how misguided our hopes had been. The topics were given none of the necessary introduction, because a nationally simulcast talk couldn’t know everyone’s background or the contexts they were living in. We had no real strategy for continuing the conversations, and we felt no responsibility to defend anything that might rub up against the political preferences of the congregation, because it wasn’t our event. We had no skin in the game.

We wanted to check a box. Political engagement: check. Our fear of “getting political” had landed our congregation in the same spot that the Moral Majority had placed them in: we lacked adequate resources to discern how to politically engage with the world around us. So, even for those of us weary of a legacy we may have had no part in shaping, the call is clear: we have to get political.

Other areas of Christian living may require embodied practices that teach us how and what to love, but if politics is that mucky realm we only enter into out of necessity, we’re not likely to give it the same level of attention. I’ve become convinced, however, that one of the most important tasks for the evangelical church in America is to examine our spiritual formation in a political direction. I use that phrase, “spiritual formation in a political direction,” in two ways: the ways we are spiritually formed by the political forces around us, and the ways our intentional spiritual formation practices form us in political ways.

Why do we think/believe/support the things we do when we have every biblical basis not to? This is a question that will far outlast any political or cultural moment, and I think the answer is found in spiritual formation. We evaluate the effects of our spiritual formation on any number of things, but we primarily look at our personal piety and ask ourselves: Am I a better person? Do I feel closer to God? A better question is this: What am I being formed to love? And the question I’m particularly interested in is this one: How does this practice form me in ways that have consequences for how I treat my neighbor, sometimes through my political participation?

This question will require that we evaluate the world around us, looking beyond the facts and figures we’re asked to accept and instead looking at the “liturgies” we’re unintentionally participating in, the spiritual formation practices we’re uncritically allowing to shape us. We’ll have to elevate the significance of things that seem small, zooming in with a microscope to see the ways they’re forming us. This connection—between spiritual formation and political practice—is crucial for understanding how we are politically formed in spiritual directions and how we are spiritually formed in political directions. I don’t think the question is whether we don’t know what our Bible says or that we don’t care. The real question is, What is forming us?

Kaitlyn Schiess is a staff writer at Christ and Pop Culture. Her writing has also appeared at Christianity Today, Relevant, and Fathom Magazine. She lives in Dallas.