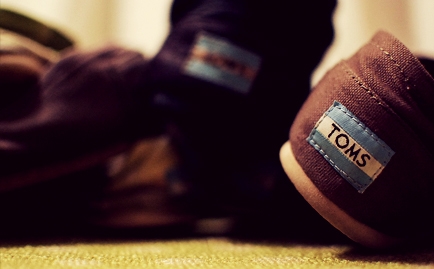 In the last two years, TOMS Shoes has grown in leaps and bounds
(pun intended). In mid-2009, we talked to founder Blake Mycoskie about his shoe company. In honor of One Day Without Shoes, we wanted to revisit that conversation:

For every pair of TOMS Shoes that’s sold, you give a pair to an orphan in need. What gave you this idea for a business?

It would be convenient to say I grew up around great philanthropists
or charity workers or that I had a great experience in this area or
field. But the truth is I was really just an entrepreneur minding my
own business. Deep down, I guess there was this desire because I saw
kids with no shoes and wanted to help. But it wasn’t this planned-out
attack. It was just something we stumbled into, but it’s changed my
life forever.

Many TOMS customers and employees are passionate about the cause. What enables that level of buy-in?

I think two things. One, in order to really make a difference in the
world and create a movement that we’re trying to do, that cannot be
created by one person. I recognized early on that it was going to be
key for me to hand over the control of the marketing and the messaging
and the ownership from a branding standpoint to other people besides
myself. So from very early on, I didn’t try to own the brand any more
than I had to as the founder, and tried to create an environment where
others could take pride and ownership in the brand. That’s just my
management style from day one.

The other part is that because our focus and goals are on the shoes
that we create and not the profit that we make—while that’s important,
that’s not the goal—that creates an environment where people can
participate even more. With every shoe that’s given away, anyone who
helped get the company to this level owns that. It’s not because of
Blake’s efforts that we’re giving these shoes away. It’s because of
everyone’s efforts. When people realize that, it creates a situation
where people really own it themselves.

In the last year, is there a highlight moment for you?

I’m thinking of two things. One is just being on the ground and
going on as many shoe drops as I do. I went to Ethiopia this last year doing some work there and I met some women with a foot disease called
podoconiosis. These women had no lives. No one would marry them or give
them a job. They were basically on the verge of suicide. And when I
heard these women talk about being healed from this disease by wearing
shoes and they were doing a hairdressing business and they were married
with kids and had a life, that was one of those moments where it was
like, “Man, who would have ever thought that having a single pair of
shoes could change someone’s life so much.” That was a very special
moment and further ignited me into committing my life to doing this.

On the ground here in America, this just happened last week. I just
spoke at the Clinton Global Initiative for university students, so I
spoke to 1,400 student body presidents from around the world. After I
spoke, I was talking to them and seeing how inspired they were by my
story. They were seeing that you could start a company and help people
at the same time and realizing it was something they could do, too. It
wasn’t only for the social elite or wealthy to do, but young
entrepreneurs can be involved in philanthropy as well. They said I
inspired them more than anything else they’ve ever heard. That made me
feel really good because that means other people are going to go out
and make good in the world and will affect people I will never even
know about.

So many of the beautiful stories from TOMS refer to what’s
happening on the ground in other countries, but this seems to bring
change in the lives of those Stateside.

Yes, that’s definitely the case, and it’s an important part of my
role. It’s the reason why I do make it a priority to do interviews and
tell the story 10,000 times. If you write a story and a young person
reads it, that might be the next person that starts the next TOMS. To
that degree, every one of these interviews or articles becomes
immensely important to inspire people. Hopefully it inspires them to
buy a pair of TOMS shoes and that helps further our mission, but
oftentimes it will inspire in a way we’re not even aware of.

Can you define a shoe drop?

It’s just a bunch of volunteers passionate about helping people and
passionate about TOMS going to a school or a place where kids don’t
have shoes and hand-placing shoes on their feet. It’s really that
simple. We work with NGOs and nonprofits in those areas. They’re
working with kids in schools or kids in a soup-kitchen-type of
situation.

You say you’re giving away 300,000 shoes this year. How many shoe drops would that take?

We do shoe drops with volunteers, but that’s more of wanting to get
people involved in the experience. But we have shoe giveaways through
the NGOs five days a week all over the world in thousands and thousands
of increments. So we don’t take volunteers every time we give away
shoes. We just do that for special shoe drops so then people can get
the experience. But we actually have a situation where shoes are given
away all the time. Otherwise, we would never be able to catch up.
[Laughs]

Thursday, April 8 is TOMS’ One Day Without Shoes. Find out more here.

The original version of this article appeared in the May/June 2009 issue of RELEVANT magazine.

10 Ways to Fail to Communicate