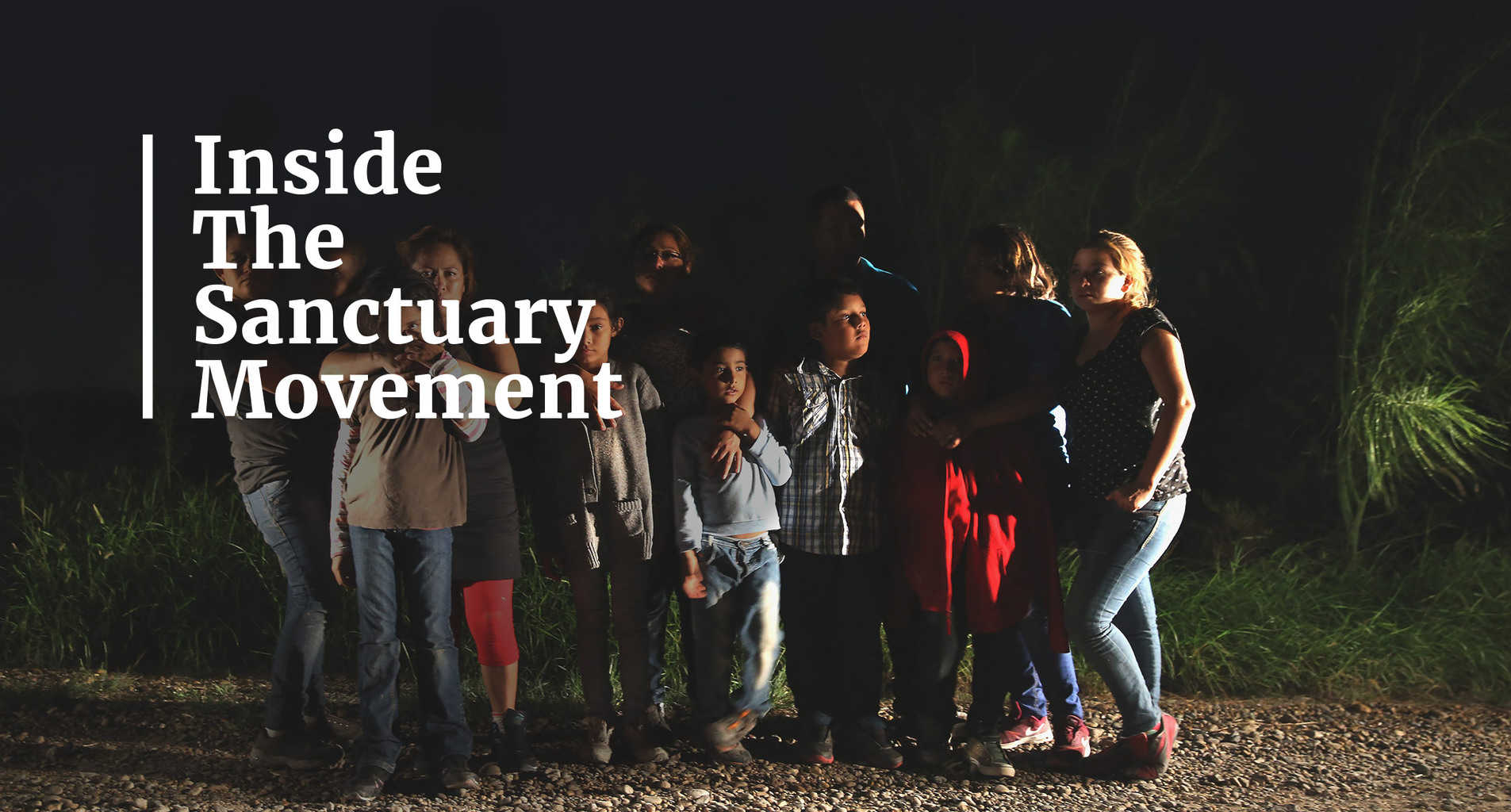 Last May, Pastor Randall Keeney got a call from a woman at his church in Greensboro, North Carolina, with an unusual request. There was a woman, she said, who had immigrated to the United States but was undocumented. This was in the thick of the furor over increasingly aggressive deportation measures in the U.S., and she was seeking asylum. Would Keeney’s church, St. Barnabas’ Episcopal Church, be willing to serve as her sanctuary?

“We had a good long conversation in church with everyone,” Keeney relates. “There were no dissenting views. We asked and all we heard were yeses.” A short time later, the woman moved into the church, claiming it as sanctuary. She lives there to this day, and she’s not the only one who’s turned to a church when all other options have run out.

A new report from Church World Service says 800 churches are now offering sanctuary to undocumented immigrants in the United States. That’s only about 0.0025 percent of all churches in America, but it’s twice as many as existed before the 2016 election, and it’s made headlines as churches open their doors to people seeking asylum from the Trump administration’s crackdown.

A History of Sanctuary

Offering sanctuary is an act of civil disobedience so, by definition, there aren’t a lot of rules regarding how you go about it. It wasn’t always that way. Ancient Egyptians, Greeks and Hebrews all codified the right to asylum into their laws, and these laws were appropriated into the Christian church in Medieval England. Criminals on the lam took refuge in a church (sometimes they had to hole up in a certain room inside the church, or even sit on a specific stool) and from there, had 40 days to weigh their options before the church turned them back over to authorities of the non-religious nature.

No such written protocol exists today in the United States, but a surge in churches offering sanctuary kicked off in the 1980s, when places of worship began opening their doors to refugees from Central America. The movement gained fresh momentum over the past decade, as President Barack Obama ramped up deportation efforts to unprecedented levels, and that momentum continues to this day.

Living in a church isn’t much of a life, but it beats getting deported. Some churches turn closets or storage facilities into makeshift bedrooms while congregants donate groceries, toiletries and toys for kids. In the meantime, it’s up to the church leadership to figure out the details of how long the arrangement will last. Some churches help provide undocumented immigrants with legal counsel and transportation, too.

Legally, federal immigration enforcement agents can follow undocumented immigrants wherever they go. ICE agents have arrested undocumented people in hospitals, while dropping kids off at school and even in a courthouse while seeking a protective order against an alleged abuser. Those places have no more legal protections than churches do.

But traditionally, law enforcement officials have abided by a sort of unspoken code about houses of worship offering asylum. Obama deported more undocumented immigrants than any of his predecessors, but ICE agents under his presidency were instructed to avoid churches and other “sensitive locations.” Simply put, violating a sanctuary church is a bad look.

Deportation efforts have kicked into a higher gear since Trump’s inauguration, but ICE agents have yet to violate this original, very literal separation between church and state to detain anyone who’s claimed asylum in a house of worship. More than likely, they’re aware that history does not smile on officials who’ve broken the tradition of respecting sanctuary.

The most famous example is the so-called “Murder in the Cathedral” of Archbishop Thomas Beckett by Henry II’s errant knights, which was the basis of a T.S. Eliot play and a 1964 movie starring Peter O’Toole. But there are more recent stories. Just last year, police in Reykjavik came under fire for dragging two young Iranian asylum seekers away from the altar at a church in Iceland.

Sanctuary churches have been around almost as long as church buildings themselves, but their recent surge in popularity is largely owing to new legislation. While Obama aggressively deported undocumented immigrants, he was optimistic about immigration reform under his second term.

That optimism fueled activism from leaders who tended to focus more on supporting new immigration laws than on providing sanctuary. The idea was that offering asylum was a Band-Aid. The real goal was to eradicate the need for sanctuary churches through immigration law reform.

That, of course, didn’t happen. Sen. Marco Rubio infamously failed to get his amnesty bill through Congress in 2013, which helped pave the way for a surge in anti-immigrant sentiment during 2016’s presidential campaign. Much of that surge was fueled by white evangelical and other white mainline Protestant religious groups who are more likely to see immigrants as a threat to American values than other groups, according to a 2015 PRRI study.

But as Trump’s executive order has heightened deportation efforts, it’s also energized a vocal minority of mainline Protestant and Catholic churches—many of which have served as a weekly place of worship for the undocumented immigrants they end up harboring. A number of Christian faith leaders, most notably Southern Baptist Convention leader Russell Moore, have written about the apparent hypocrisy in a religion that claims to be “pro-life” but fails to have much regard for the plight of immigrants. And Christians aren’t alone. A national network of sanctuary congregations includes representation from Jewish, Buddhist and Baha’i communities.

Protestant churches are a loose-knit collective by design, with various doctrinal splits. Many of them simply don’t believe the Bible’s language about immigrants applies to today. Prominent Christian minister Franklin Graham has flat-out said that immigration “is not a Bible issue.”

Other churches are more sympathetic to the plight of immigrants, but feel that their hands are legally tied. The Immigration and Nationality Act says anyone who knowingly harbors an undocumented immigrant “in any place, including any building” can be sent to jail for years. This has rarely been enforced, but it does happen. In the 1980s, Pastor John Fife of Arizona and a collective of other ministers were arrested on suspicion of harboring undocumented immigrants.

Frustration Is A Graceful Reminder

Such cases are few and far between, but many faith leaders aren’t eager to play the odds. The Trump administration has signaled a willingness to pull funds from sanctuary cities, so it’s not wholly inconceivable that its patience could run out with sanctuary churches as well. If that happened, pastors accused of harboring undocumented immigrants would have very little legal ground to stand on.

But some sanctuary churches are finding unlikely allies in local law enforcement. In Denver, Arnie Carter assisted the First Unitarian Church in providing asylum for two undocumented immigrants, and he says local police have been surprisingly supportive, especially after one of the people taking sanctuary in the church started receiving threats online.

In fact, the local police chief stopped by to offer his protection. “He reassured her that they would do anything they could to make sure she stayed safe and that they would be investigating the threats,” Carter says. “The local officials have always been very supportive and helpful. The local officials have been like, ‘This is a federal issue and we’re just gonna make sure everyone is safe, that’s our job.’”

The Harvest is Plenty

There have, however, been a few high-profile cases. A 59-year-old undocumented woman who goes by Emma found refuge at a Quaker Meeting House in Albuquerque. Jeanette Vizguerra and her three children took shelter in a Unitarian Church in Denver. There are stories of immigrants who’ve moved into church buildings in Chicago, Phoenix and Philadelphia, too.

The number of churches, synagogues and other houses of worship offering sanctuary has only trended upwards since the 1980s, and there are no signs of slowing. In fact, it’s inspired secular institutions to offer asylum as well. In addition to cities, college students have begun calling for their campuses to serve as sanctuaries. The University of Pennsylvania says it won’t share information about undocumented students with immigration officials unless required by warrant.

Regardless, the fact remains that there are only 800 churches offering sanctuary in the U.S., which is not a lot in the big picture, especially when there are an estimated 11 million undocumented immigrants living in America. “The harvest is plenty, but the workers are few,” as a certain prominent religious leader famously said.

Nevertheless, the sanctuary church movement is a movement, and, according to Keeney, it has its roots in Scripture.