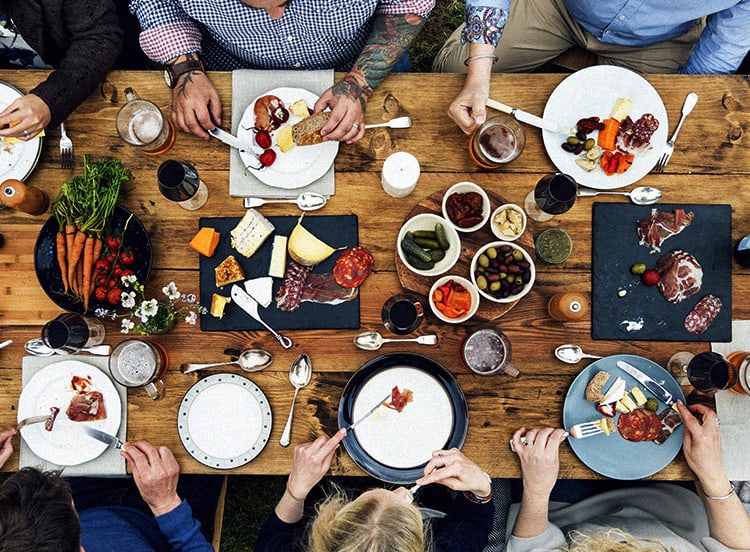 Actress Sarah Silverman’s show “I love you, America,” may not be the place that everyone expects to spot an incredible gospel message, but the Good News is in there. A liberal darling who publicly used her platform to endorse Bernie Sanders bid for the presidency, she sits down and often shares a meal with people who adamantly supported Donald Trump. Through these shared meals, she’s come to say that she loves these people she’s met who are so different from her. This is both inspiring and challenging for me.

I was recently asked to speak at a youth conference. I was a youth pastor for six years and I love any chance I get to serve and be amongst emerging adults again. The conference was even being held in one of my favorite states: North Carolina.

North Carolina in the fall is like a Nicholas Sparks book come to life—with falling leaves and brisk winds—and this girl who lives in California loves to experience “seasons.” To make the deal even sweeter I was being asked to co-keynote with writer Rachel Held Evans. I admire Rachel’s work, and if you were to look back on my underused twitter account you would quickly learn she is someone I often retweet.

You would think I would have jumped at the opportunity instead of staring at the contract with a host of questions. Speaking at a youth conference, especially in one of my favorite places alongside one of my favorite thinkers usually isn’t a controversial decision for me. But this particular invitation was not simple. I knew that if I accepted, that this year’s conference would challenge my own ability to love “the other” because of some lingering controversy.

During last year’s rather divisive election, some kids had worn “Make America Great Again” hats into the coliseum which served as the worship space. Regardless of one’s political leanings, overt displays of partisan allegiance like that are likely to stir the pot. And stir the pot it did.

The situation escalated. Some kids took pictures at the event, posting with the hashtag #buildawall and the conference’s hashtag. Kids usually put clothespins on each other with encouraging statements or Bible verses; but that year, some kids had written “build a wall” on one side and “I love Trump” on the other and pinned them to other kids.

The kids who had been “pinned” said they felt threatened and uneasy. The situation was tense as 5,000 youth and leaders, representing different places on the political spectrum and different ethnicities, tried to share one space.

Hoping to explain and humanize the reason why those actions were so harmful, the organizers had one of the chaperone’, herself an immigrant, explain how threatening and unsafe those actions made the space feel particularly for our Latino brothers and sisters. Following her explanation, hundreds of kids and leaders began to leave the auditorium, some left out of anger, some left because they didn’t think kids should hear something so “political” at a youth conference and some left because they wanted to stand up for social justice. It was a mess that made national news.

For this year’s conference, they hired Rachel and I to try and bring the conference together. I am not as well-known for my political stance or my opinions around these matters, but simply by being a female Canadian pastor, folks usually assume I am not one of the red hat wearers. And they’re right. I tend to lean more left of center in my friendships and ideals that I personally hold from healthcare to creation care.

So I was pausing because just attending this year’s conference—let alone speaking at it—would require me to dive into the controversy from last year and participate in potentially uncomfortable political conversations. As a Canadian and recovering people pleaser, that caused me to halt a little bit. My perspective could easily upset a lot of people, as those who expressed a similar perspective to mine had done in the past.

The organizers had decided to make this year’s theme “A place at the table” and center it around communion, our common meal. They wanted everyone to feel safe in the space. They wanted to make sure that Rachel and I were willing to provide that space for not just the progressive or moderate kids, but also the kids who may be coming from homes with a Trump flag out front.

So this was a gut-check for me. I am usually a peacekeeper, but I am also incredibly concerned about the prophetic role that is a part of being a pastor. Pastors are, like prophets, called to speak uncomfortable truths when necessary. But they are also called to gather people for worship and fellowship and spiritual growth. Uncomfortable truths don’t often gather people. They usually make people shut down or retreat.

As I began praying about this event, I was also working on a talk for The Liturgists gathering in L.A. about loving our enemy. In regards to your enemy, Jesus told people to turn the other cheek when someone strikes you, to offer up all your clothes when asked for a cloak and keep walking if you are asked to walk a mile. After lots of study, I realized Jesus is actually shaming the people who have struck you, taken your clothes and tried to take advantage of you. Awesome. I loved this because this meant that I got to be right: Jesus was a social justice advocate after all.

But as I wrestled more with the text I noticed nowhere did it say walk away from them. Avoid them. Get into your echo chamber. Instead, you had to stay close enough to those you don’t agree with that they could strike you.

Jesus kept His enemies close enough to have a meal with them. I didn’t love this, but as I studied, I re-read the Passover meal account in Luke and noticed something I have never noticed before. Jesus declares He knows His betrayer is amongst them, yet He still shares in communion with them. Jesus ate the sacred Passover meal with His betrayer. This makes me ask, “Am I really OK with everyone having a place at the table?”

I think the only way forward as a nation and as individuals is to learn to share space with people we consider enemies. To be willing to allow them a seat at the table and not just stare at them across party lines holding unto our own assumptions. It may mean that, like Jesus, we risk being hurt by sitting down with our enemies.

But we can never love our enemies if we refuse to be near them. Who knows? Perhaps, through sharing space with people we disagree with, we will one day be able to say, “I love them.”

Rev. Sarah Heath currently serves First United Methodist Church in Costa Mesa California, where she is the lead pastor for a church re-start and revitalization. Along with being a pastor Sarah is a speaker and a writer. She is the author of "What's Your Story? Seeing your life through God's eyes" and is the host of Sonderlust the podcast. You can hear Sarah featured on the litrugists podcast, Homebrewed Christianity, A tiny Revolution with Kevin Garcia and other podcasts. www.revsarahheath.com

Beth Moore: No, God Does Not Put Up With Secret Sins From His Servants for ‘the Greater Good’