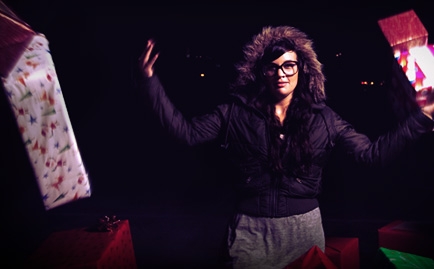 In the weeks leading up to Christmas, many of us relax. We spend time with family, sharing anecdotes of Christmases past with a smile, and quietly reflecting on what this time of year is meant for—loving each other and remembering the joy of our Savior’s birth.

Well … maybe not.When December rolls around, most of us find ourselves squeezed between our convictions about responsible stewardship and the cacophony of messages ever wooing us toward indulgent consumption.

Then, when the credit card bill arrives in January, we lament that—as if against our will—we’ve once again been dragged into the holiday marketing machine and spit out like packing peanuts.

And we’re not even festive pagans. We’re Christians.

We’re people of faith who have heard the call of God to dominion over the earth and stewardship of resources. But, with the best of intentions, perhaps, we’ve earnestly hoped reliving the ancient drama with our molded plastic Fisher-Price nativity set or singing “Happy Birthday” to Jesus might sustain us.

When we’re completely honest though, we doubt it can. We truly do want to live differently this year.

The good news is, unlike so many consumers who are squeezing into crowded malls and shopping by mouse-click this season, Christians wage the holy war against indulgent consumption with resources more sustainable than willpower, nagging worries about increasing debt or even the legitimate human aversion to strip mall parking lots. In the face of our culture’s obsession with stuff, Christians truly are navigating a brave new way.

Research estimates Americans view more than 200 commercial advertisements each day. Our online purchases, Facebook profiles and even the personal text of our emails now allow advertisers to dangle the lure of custom ads tailored specifically to our particular demographic profile. Marketers pay millions to do it-, of course—because it works. Like mindless fish, we’ve taken the bait.

In December, though, the pressure to consume gets even more personal. As Christmas approaches, we’re plagued by voices from within—and sometimes from family members. If we’ve decided to reduce consumption by giving fewer gifts, we may hear the hiss of an internal shaming voice. “It doesn’t matter that her needs and wants have all been met. You know she’s going to give you an expensive gift,” the voice accuses. “You wouldn’t dare fail to reciprocate.” Should you perchance succeed in resisting this clever message, you might even hear, “Christianity is all about giving, isn’t it?” In no time, that twisty devil-logic, grounded in no particular theological rationale, has you pulling out a credit card to purchase some horrible novelty necktie or a Mother Teresa bobblehead figure. Happy Birthday, Jesus.

We can do better

Kalle Lasn is the founder of Adbusters magazine. Lasn recognizes the growing influence of the Christian community in matters of social responsibility. He observes: “I’m noticing that over the last 10 years something has opened up in the faith communities. They are now more than ever before in my memory getting involved in being stewards of the physical environment. They’re stepping up to the plate finally.”

A leader in this movement toward reclaiming Christmas is Aiden Enns. In 2001, Enns, and six other Christian friends, launched the “Buy Nothing Christmas” campaign. The group sponsored a full-page ad in a Canadian church paper and created a website, BuyNothingChristmas.org. The campaign extends a threefold invitation exhorting Christians to embrace a holiday season that is “richer in meaning, smaller in impact upon the earth, and greater in giving to people less-privileged.”

“Some traditions have gotten distorted and may do more harm than good—like, for example, over-shopping at Christmas. In an affluent, materialistic society, it makes no sense to shower more gifts upon our loved ones as a sign of our love for them in the name of the Prince of Peace, Jesus Christ.

“Christmas is a time for open displays of generosity as an expression of our gratitude and love … to celebrate togetherness in spite of differences. We can keep doing this, even though we change some of our traditions.”

Author and activist Shane Claiborne shares Enns’ passion for establishing new holiday traditions. “My mom and I sew clothes every Christmas,” Claiborne says. “I’ve become quite a tailor with her. It’s fun. It’s life-giving. Where that comes from is trying to create a third way that’s neither culture or counterculture, always reacting all the time.”

Like Enns, Claiborne encourages Christians to be a little more creative than we’ve been up to this point. He explains: “Let’s figure out new ways that we really honor Jesus by celebrating His birth. Let’s figure out ways we create rituals and traditions within our own families. I see folks making gifts together at Christmas, folks doing things like The Heifer Project and other ways that they give gifts to offer dignity and honor to people who don’t have enough.”

Enns offers some sage advice to those considering establishing new ways of celebrating the birth of Jesus this year—particularly encouraging moderation. “Start small and explain what you’re doing. Sure, some people will want to go hardcore and only give homemade things, used goods or vicarious charity donations. But often that can be divisive—‘I’m righteous, you’re not.’

How to Serve in a Church Without Burning Yourself Out

“I prefer to remain in conversation with those with whom I differ. And try to refrain from being judgmental of others. It helps to be less harsh on yourself, and then extend that grace to others.”

A friend of mine stands in this holy parade of disciples. Last fall, Jan told me she wanted to do Christmas “differently.”

“Yeah,” I thought cynically, “don’t we all? Been there, tried that.”

After the holiday, I didn’t even bother asking her how it had gone. That can feel so shameful. The next time I saw her, though, Jan was beaming. Though her home had boasted no Christmas tree, no plastic reindeer, no twinkly lights and no tinsel, Jan exclaimed, “It was my best Christmas ever!”

Jan had canvassed her neighborhood, knocking on each door, saying simply: “Hi. I’m wondering if there’s anything I can do for you? It’s Christmas and I’m wanting to give back something to my community.”

Typically, her efforts were met with blank stares and polite refusals. Using her most persuasive tone, she’d try to talk folks into a leaf-raking or gutter-cleaning. In the end, she was invited onto a few roofs. She baked a lot of bread for others. She made some new friends. As I imagined her scooping nasty muck out of gooey gutters, I couldn’t help but notice that her incarnate service was a lot more like the first Christmas than any of the stuff we wrap with red-and-green polka-dotted wrapping paper today.

So this Christmas, know that as you pursue a celebration that is richer in meaning, smaller in impact and greater in giving to people less-privileged, you honor the One whom we celebrate. May He take delight in your holy gifts of obedience.

This article originally appeared in the Nov/Dec 2009 issue of RELEVANT.

The Necessity of Boredom