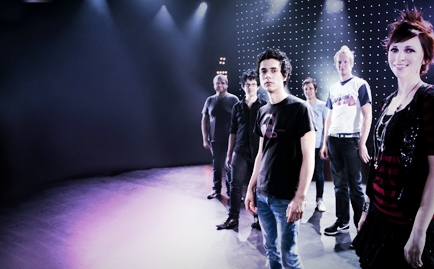 Jesus Culture’s multiple albums, numerous conferences and viral international impact is the result of a few ordinary teenagers and twentysomethings with one very simple motivation: to encounter God’s presence.

This should be no surprise; the explosive combination of raw passion and youthful idealism seems to be the genetic makeup of movements throughout the years. Jesus Himself chose average young people to lead His ministry—outcasts that society had given up on, headstrong kids brimming with unrefined passion and energy. Following suit is Jesus Culture, an international movement incubating revival among countless thousands through its unique worship experiences.

In 1999, the thought came to Bethel Church youth pastor Banning Liebscher to put on a small youth conference for their community in Redding, Calif. At a time when phrases like “subculture” and “counterculture” were becoming popular catch-phrases in many churches, Liebscher and his leaders (including worship leaders Kim Walker-Smith and Chris Quilala) desired a generation whose culture didn’t reflect an institution, music style, bracelet or T-shirt, but rather the attitude and posture of Christ Himself. They named the conference Jesus Culture, with the hope that God would show up, worship would transform and revival would begin.

Over the next several years, Liebscher and his band witnessed the growth of a movement that surpassed their expectations. In 2005, the group came up with enough funds to record a CD, hoping album sales would allow them to do a conference on the east coast. “We didn’t even know if the CD would sell,” Liebscher says. “We had no idea what we were doing at all, but we felt God was telling us to share what He was stirring in our community with an entire generation.”

Liebscher didn’t know it, but Jesus Culture was about to become an internationally recognized movement. And it would happen through YouTube.

Many people’s initial encounter with Jesus Culture came through a YouTube video featuring worship leader Kim Walker-Smith performing John Mark McMillan’s “How He Loves Us” at a conference. The video now has more than 4 million views.

“We didn’t even stick that up,” Liebscher says. “Some kid put that up. We didn’t even have the idea. None of us even knew about it until someone finally got a hold of us and told us it had gotten 250,000 plays.”

Walker-Smith remembers first hearing the news. “My little brother, who was only 10 years old at the time, called me and told me I was on YouTube. I didn’t even know what YouTube was. It was crazy because none of us expected anything like that to happen at all. In fact, the night that video was taken, I walked off the stage and felt embarrassed. There had been this really awesome presence of God in the room unlike any night prior, and I felt like I couldn’t find the words to convey the magnitude of what was happening.”

Hundreds of thousands of people later, the movement’s mission remains the same.

“Everything we do is meant to send people out to their own community,” says Chris Quilala, the worship leader whose voice threads through each Jesus Culture album along with Walker-Smith’s. “We want this generation to be Jesus to those right in front of them. There’s always been a strong focus on local outreach and there always will [be].”

While many are quick to label this generation as apathetic, Quilala and the Jesus Culture team hold up a mirror to a different kind of tribe made up of young, motivated revivalists passionately pursuing Christ’s call and mission. Liebscher, who has encountered hundreds of thousands of young people through Jesus Culture, views this generation as one massively marked by passion, creativity and innovation. “This generation is growing up in the smallest world ever,” Liebscher says. “The world has become so connected that they’ve been given permission to dream bigger. Back in the day, the thought of changing the world was somewhat hard to wrap your brain around. Now, the ability to impact the nations through something as simple as a website is perceivably tangible.”

Liebscher adds that these qualities extend to young people globally, refuting rumors that the spiritual climate in regions such as Europe is bleak and decaying. “We were doing a conference in Berlin where 2,700 people showed up and sold out the entire venue,” Liebscher says. “We had to turn away hundreds more. The passion in these young people’s worship and pursuit of God that night was inspiring. I didn’t even have time to preach because they were pursuing God so passionately through worship. Hope is alive and well in Europe, and it’s alive and well in the States. The generation we are seeing rise up is honestly embracing a lifestyle of holiness that is willing to consecrate fully to the Lord.”

Jesus Culture is defying expectations of this generation, as thousands of young believers attend their new breed of “Christian” conferences, and numbers continue to increase every year. “Young people are on the search for the genuine,” Liebscher says. “I think the American church hasn’t been the best representation of authentic, genuine Christianity. In many churches, community and acceptance is based on looking and acting a certain way all the while presenting a very controlling, angry God. I believe if we can bring people into a true encounter with the God of the Universe, they will encounter a God who is passionately in love with them, not angry with them, and they will give Him their lives. That’s what Jesus Culture tries to do.”

How to Celebrate Christmas When You’re Hurting

So, why do people disregard this generation as spiritually detached? Liebscher suggests that while passionate and idealistic, this generation is also very entitled. “They’re not like the World War II generation who understood what it meant to sacrifice in order to save a nation, or build a company. They’ve grown up in a world where things are given to them … fast. We encourage students to start revivals, and when it doesn’t happen in a week, they’re thrown off. There’s a short-term mentality.”

Walker-Smith and Quilala also offer a desperate plea for mentorship inside and outside the Church. “We’re fortunate to have [spiritual] mothers and fathers who have a very influential voice in our lives,” Walker-Smith says. “They’re the kind of people who aren’t just going to sweet-talk us all the time and tell us how awesome we are. The moment we get out of line, they’re the first ones there with a strong voice to help steer us back on track.”

“We desire the same for those we influence,” Quilala adds. “We’re living in the midst of a motherless and fatherless generation who need the guidance and direction to maintain focus on what’s most important: pursuing Christ.”

Maintaining focus on what’s important isn’t always easy as Jesus Culture’s impact expands. “When all of a sudden money is coming in, there’s a staff relying on me or when iTunes doesn’t launch our album like we thought, it’s evident to a lot more people,” Liebscher says. “I find myself constantly wrestling and processing, reminding myself this is God’s deal. If He wants to dismantle this whole thing, then that’s up to Him. I’m going to do the best I can. I’m going to keep pursuing Him. I’m going to continue carrying out my assignment from Him. But if He wants to take this whole thing away, that’s OK. I’ve found an immense amount of freedom in that.”

While they’re ready for whatever God has in store, Walker-Smith is also looking to the future and how Jesus Culture can grow—both personally and musically. “As worship leaders, I’m looking forward to becoming more established in our own songwriting,” Walker-Smith says. “I think it’s pretty incredible that God has brought us this far doing songs that are other people’s voice. I can’t even imagine what it’s going to be like when we really find our own voice and sing the songs that are coming out of our hearts.”

The group is helping give a voice to other worship artists through their record label, Jesus Culture Music, which they started a few years ago. “Another thing we’re working toward is expanding the label to bring in other worship artists we believe in and want to support,” Walker-Smith says. “We recently added Jake Hamilton and Kristene Mueller-DiMarco, who are like family to us. I want  to see Jesus Culture grow in raising up worship leaders.”

Eleven years since they began, Jesus Culture has more than 70 conferences and nine albums (their most recent, Come Away, released in November 2010) under their belt. It seems the more they abandon, release and give to others, the more God moves, reveals and gives to them—a colossal response to a couple of kids who set out to “encounter God’s presence.”

Overcoming Our Laziness in Missions

The Unexpected ‘Problem’ With Grace