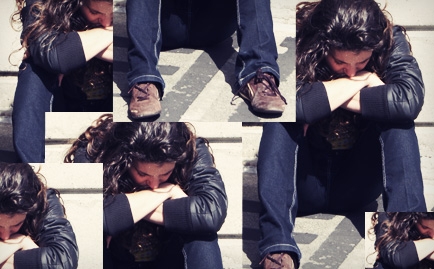 "If you’re not willing to stop sinning, you shouldn’t even call yourself a Christian.”

“The answer to habitual sin is to just stop it.”

“If you’re stuck in habitual sin, you should question whether or not you’re really saved.”

Christians manage to say a whole lot of stupid stuff when it comes to the subject of habitual sin. I bet you’ve heard some of those same ideas before. And I bet, just maybe, they freaked you out. That’s kind of the point, of course—to try and scare you into changing behavior.

But let’s take those item by item.

"If you’re not willing to stop sinning, you shouldn’t even call yourself a Christian."

There’s a few problems here. First, Christians don’t claim to be sinless—quite the contrary, in fact! 1 John says, “If we claim to be without sin, we lie and the truth is not in us.”

Second, if you actually talk to a person struggling with a habitual sin, what you’re almost certain to find is that they are very willing to stop sinning—they just don’t know how to do it. I work with a whole lot of people stuck in habitual sin, and, consistently, they hate the thing, they don’t want to do the thing, they’ve tried all kinds of stuff to not do the thing, and nothing has worked. Willingness is not the problem.

That brings us to the second idea.

"The answer to habitual sin is to just stop it."

Only someone who has never faced down something impossible would say this. I don’t know about you, but my sinfulness is too big for me. … It’s almost like I need a savior.

Paul—you know, the guy who wrote most of the New Testament—had the same experience: “For what I do is not the good I want to do; no, the evil I do not want to do—this I keep on doing. … What a wretched man I am! Who will rescue me from this body of death?” (Romans 7:19,24)

Paul’s answer to this was that he needed Jesus Christ to change him, that his willpower wasn’t enough. He wrote about this in the book of Galatians, when he chastised the people there for trying to live the Christian life “by human effort” (Galatians 3:3).

One of the ways Jesus changes us is to give us wisdom about what’s driving us to that sin in the first place. For example, maybe for some people, their sin of habit is pornography—and they feel really guilty about it. But very few of them have ever thought and prayed on the question, “What’s driving me to look at this in the first place?” A big motivator for some is that they use pornography as a stress release. Well, now, if we want to move past this habitual sin, we’d need to learn how to live a lower-stress life and learn what godly, healthy stress relievers look like. But we’d never come to that point if we’d clenched our teeth and decided to “just stop it” in our own strength. What is the root issue of your sin of habit?

"If you’re stuck in habitual sin, you should question whether or not you’re really saved."

No, no you shouldn’t. Here’s what the Bible says: “Everyone who calls on the name of the Lord will be saved” (Romans 10:13). If you’ve said, “Jesus, I’m a sinner, and I’m asking you forgive me and take control of my life and heart,” you’re as saved as saved can be.

As I said at the beginning, there are a lot of Christians who say dumb stuff on this topic, and, as we say in the South, bless their hearts. Some of them, I am certain, mean well. They do. They know sin is bad—and it is. They know God doesn’t want us to sin—and He doesn’t.

But these Christians are confused about how we move past a sin. The truth, as we were just saying, is that we do so piece by piece, bit by bit, with wisdom guiding the journey. Human willpower and gritted teeth alone don’t lead to changed lives.

The main thing that our well-meaning brothers and sisters are confused about, though, is the nature of God’s forgiveness. The truth is, it just doesn’t run out.

If you’re struggling with habitual sin, first, welcome to being human and a Christian. We’ve all been there. Second, relax for a minute. God’s not going to let you go. Take a deep breath and be still. Then, start asking God for wisdom. Seek out some older Christians who aren’t uptight about the subject. Seek the Lord on what’s driving the sin areas in your life. And step by step, address those behind-the-scenes problems; you will begin to see God change your life right in front of you.

Jed Brewer is the director of productions for Mission USA and blogs frequently.