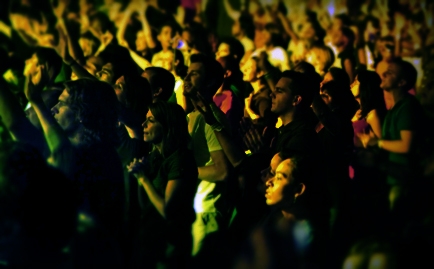 I have been leading a rebellion, and chances are, you’ve been part of it.

Sure, you’re not participating in my particular branch of this rebellion, but each week, hundreds of thousands gather together under this banner of mutiny. And they do so to worship God.

I have been leading a 20s/young adult/college ministry—whatever it is you want to call these ministries that are launched with a separate worship service, under the blessing of their church. But I’ve realized that at their core, these services are birthed out of rebellion.

The attitude is rarely named. We prefer to cloak it, to explain it away as a simple difference in musical tastes, or as an aversion to getting up early on Sundays. But let’s call it what it is. Rebellion. Mutiny.

Most of these ministries are created out of a desire to do church differently. There are a handful of young adults in a church who have new ideas for what church should look like. They want their church to be different, and starting a new ministry that looks like the church they wished their church was is the easiest way to leave without leaving.

But now I think it’s time for us to take a deep breath. It’s time for us to find another way. Both younger generations and older ones need to own their mistakes and the ways each one has contributed to the situation we now find ourselves in.

Arrogance against the old

If you find yourself in this age demographic, then you also know your generational position as the “lookout” can make you arrogant and perpetually dissatisfied by your current church. You’re perceived as a constant challenge to the process and the way things have always been done. While some of you have stuck around and tried to change your church, most of you have responded by walking away in silence, quietly hoping you could ease out the back door and no one would notice.

But apparently you didn’t leave quietly enough. The Barna Group has famously studied your every church move. They’ve found that from high school graduation to age 25, your weekly church attendance drops by 42 percent, and by age 29, 58 percent of you vanish from church altogether. However you’ve chosen to respond, the spirit of arrogance will follow you until it swallows you. If this is you, you must look deep into your heart and repent from the sin of arrogance that’s caused you to emotionally pull away from the churches you’ve been a part of.

Whenever arrogance is present, having a heart willing to submit to authority becomes impossible.

But the ownership of this tension must be shared. Older generations have spent much time trying to prove themselves as a worthy “captain” of the ship. They have chosen not to heed the younger voices around them as contributing members of leadership. The truth is, churches still only hire young people to work with young people.

Fear of the new

The idea that Earl Creps has written about in Reverse Mentoring remains largely uncharted for most people in church leadership. Creps maintains that mentoring goes both ways—the learning transaction between the old and the young shouldn’t be a one-way street. Creps admits the most troubling part of the research he did for his book was discovering how open people in the secular market—in technology, culture and business—have been to insight from younger generations and how slow the Church has been to follow suit. He points to examples in business literature where companies like Texas Instruments, General Electric and Proctor & Gamble advise inviting the ideas and leadership of younger people. Creps goes on to say that “Christian literature doesn’t begin to point this out [as necessary] until the 21st century.”

Fear is often at the root of this broken relationship between generations. I’ve heard elders in leadership confess to fear of change, fear of not being able to execute new ideas, fear of disrupting the way things have always been done, fear of what church people will think.

Whenever fear is present, control becomes the way we respond.

And because older generations of men hold the power card in most churches, nothing will change until control and fear are surrendered.

When we speak of the Church, all of us have different ideas on what that means. Peter’s message is a reminder to all of us that one of the essential pieces to the movement of the Church is a generational one—a collective, intergenerational voice that’s sensitive to the Spirit of God. I believe in that dream God gave to Joel thousands of years ago. I believe each of us has been designed to contribute to that dream right now.

The time is now

If you’re going to rebel, it’s pretty important to make sure it’s against the institution of church and not the dream of God known as the Church.

For the first time in history, we have five generations alive at the same time. Imagine what that might look like if members of each generation were invited to a seat at the table—to teach one another about theology and ecclesiology.

Part of what has become broken is the language we’ve adopted in the Church to define younger generations.

The phrase the “next generation” has been thrown around a lot. This phrase points to an idea that this group of people will “one day,” “in the future” be a contributing member of the Church community. Languages can be limiting. We have to find words that envision and inspire who we are supposed to be in the present. This “next generation” is spending money, making music, writing books, making websites, educating children, making children … and they are doing all of this right now. They aren’t standing on deck. They are in the batter’s box hitting home runs right in front of us. And yet many of them are still looked at in the Church world as if “one day” they will be able to contribute.

It’s time for us to tell a new story about how we as the Church are seeking to build the Kingdom of God. And this new story for us is obviously taken from the old story. If you are a young person trying to figure out how to best contribute who you are to the mission of God, I ask you to consider doing it in a way that honors the beautiful dream God had for the Church. A dream that included the old and the young bringing their God-given design into relationships with one another for the Glory of God and for the redemption of the world.

Are you part of a young-adult ministry? Do you think you’re contributing to a "church mutiny?"

A longer version of this article originally appeared in RELEVANT.

The Incarnational Lessons of Undercover Boss