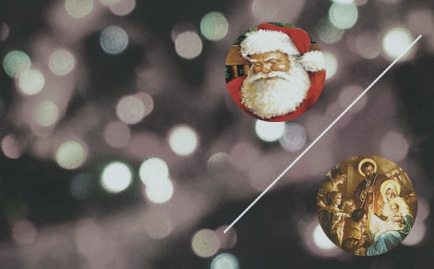 A couple of years ago, a guy in California made headlines for his Christmas display. It depicted Jesus. Holding a shotgun. And Santa on the ground, presumably killed by the shotgun-toting Jesus. The man, Ron Lake, called it “art” and said it was about Jesus defeating commercialism. Naturally, the man’s neighbors were up in arms about the display, saying it wasn’t appropriate, especially given the display’s proximity to a school bus stop. It became a freedom of speech versus protection of children issue. It also tapped into a deeper conundrum felt by plenty of people—especially Christians—every Christmas.

Each year, starting right after Halloween (or, if you’re a good person, after Thanksgiving), decorations, displays and church services start asking the question—who do you think Christmas is about? Jesus … or Santa?

It’s a question I’ve always wrestled with. The church tradition I belong to observes Advent and the church calendar, which means we don’t even sing Christmas carols until Dec. 24. The four weeks leading up to Christmas are supposed to be about waiting on God, remembering that He came once as a child and will return again in glory. It’s an amazing time of year—each Advent season, I find my faith strengthened and my heart quickened with the formal reminder of Christ’s promised coming.

But I also have a particular fondness for the other Christmas. The one with Santa. The one with reindeer, egg nog and giant lights that double as fire hazards. The one with the Rat Pack, horrifically awesome ornaments and Home Alone. In short, the Christmas Jesus apparently wants to kill with a shotgun.

I know I’m not the only one—most everyone I know is both obsessed with the more kitschy side of Christmas while freely embracing the sacred side. So … have we gotten it wrong? Is Christmas supposed to be about Jesus or Santa?

This is usually the part of an article where the writer goes into an explanation of St. Nicholas—and I don’t want to belittle that. He’s a wonderful example and someone I will likely tell my future children about as the inspiration for the Santa they’ll see on TV (for a great thought on this, check out this article).

But I don’t love a bearded guy from the fourth century who dropped coins in socks. I’m inspired by him, but I don’t love him—at least, not in the same way I love a happily corpulent man with rosy cheeks who is the very embodiment of Christmas.

I never believed in Santa Claus, at least in the sense most kids do. I never thought he brought presents or drove a sleigh or any of that stuff—I was, and remain, skeptical to a fault. But somewhere along the line, I became convinced the myth of Santa is more powerful than “real” and “unreal” would suggest. In a sense, I came to my belief in Santa as an adult.

Santa Claus, like all good myths, personifies much more than he seems to at first. Yes, he’s a jolly fat man who has questionable labor practices and skulks around in other peoples’ homes. But more importantly, he embodies all of the things we want to feel at Christmas. He represents that feeling we remember from childhood—maybe that feeling never even existed, but that doesn’t really matter. It’s the idea that there’s Christmas magic in the air, the idea of a hush falling over a sleepy household while sugarplums dance, the idea that there’s a deeper story at work. Santa Claus represents a nostalgia for something that likely never was, but that somehow taps into a deep longing within us.

Everything that stems from that part of Christmas is an effort to claim it. There’s an echo of longing in Sinatra’s “Christmas Waltz,” just as there’s a particular childlike wonder in a well-decorated Christmas tree. There’s no cynicism, sarcasm or irony in the wonder of Christmas—it’s a longing for simplicity, for the security and unsullied awe of a childhood Christmas. Santa and all he represents suggests we’re all searching for something, and perhaps the trappings of a “secular” Christmas are hints of that something.

Jesus Without a Shotgun

But what about the real reason for the season? Yes, I’m talking about Jesus (but not the shotgun-toting version).

The weeks leading up to Christmas are supposed to make us empathize with the anticipation that the people of Israel felt as they awaited the Messiah—and these weeks are designed to make Christians anticipate the second coming of the Messiah. This time reminds followers of Christ that we can catch glimpses—small reminders—of the Kingdom of God. It reminds us that we’re living in a world that God has broken into. And it reminds us of the promises that He will one day set everything to rights.

If viewed in the right way, the myth of Santa can also serve as a sort of Advent reminder. The myth and magic of Santa’s Christmas—and all the emotions of longing, joy and hope that surround that myth—offer hints of something deeper. Namely, what Santa embodies foreshadows the greatest Christmas Myth, the true Myth that fulfills all our Christmas wishes—the birth, life, death and resurrection of Jesus.

Jesus came with a love, a joy, a peace and a hope that’s only suggested at in our annual efforts to find security, innocence and wonder in the season. Our idea of Santa Claus stands in as a beacon for what we’re all looking for, deep in our bones—a search that culminates in the person of Christ. When viewed in that light, the myth of Santa stops being something Christians should be afraid of and becomes a true hint of where real hope lies.

The Silent Grief of Miscarriage