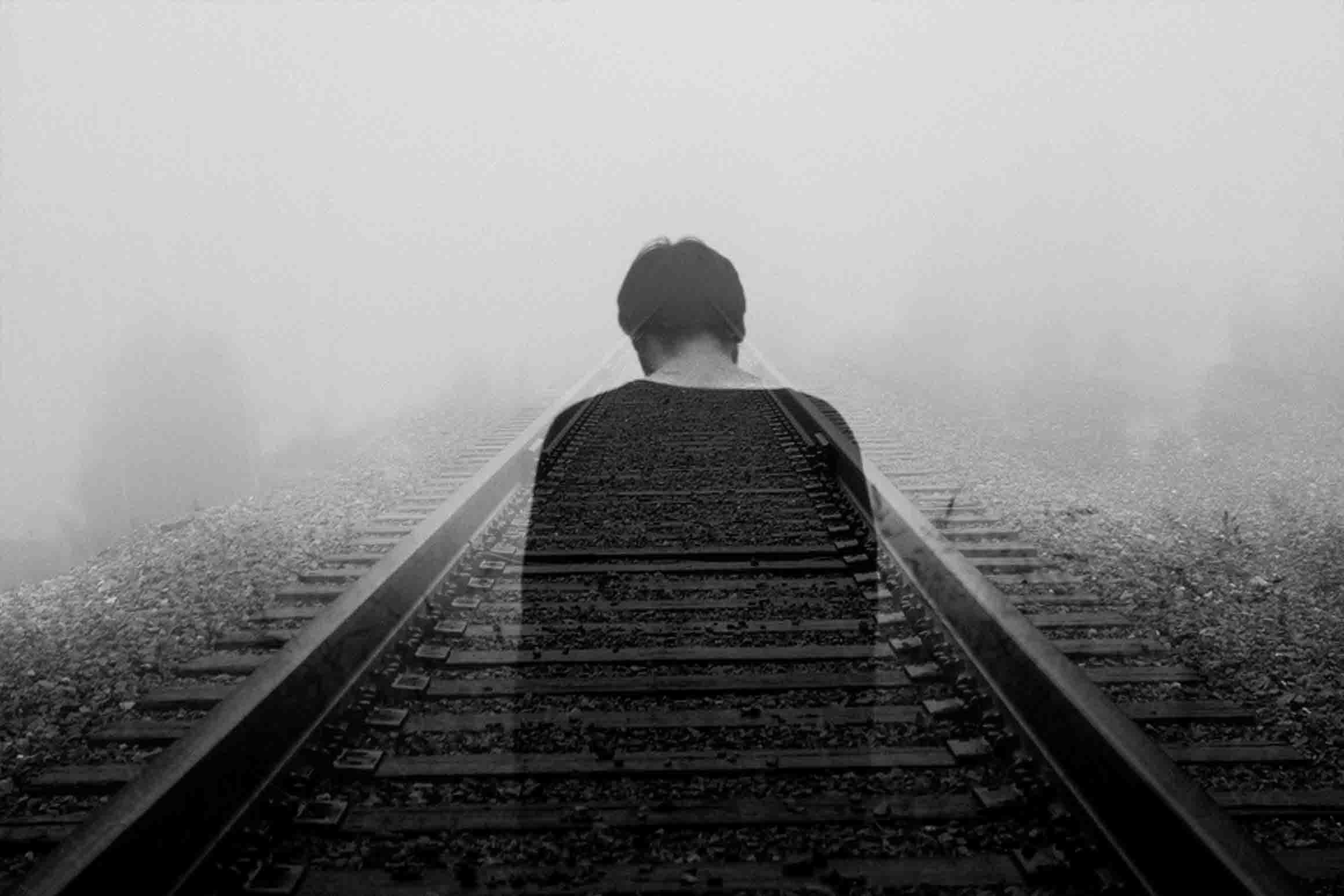 Dustin Pari was about 9 years old when he says he saw something that “petrified” him and forever changed his life.

He says it stood a few feet tall and had a human shape, only it was dark gray and see-through, “like vapor, like a gas station on a hot day: you can kind of see those fumes coming up,” Pari says. And it was lurking in the doorway of his bedroom in the New England home he grew up in.

“It really just intrigued me. What was this thing, and what was it doing there?” he says.

It was something he now would classify as a “shadow figure.” That’s after he’s spent two decades as a paranormal investigator, featured on popular reality television shows Ghost Hunters and Ghost Hunters International.

Like many, Pari first encountered the field of paranormal investigation on TV, watching popular shows like Ghost Hunters, Ghost Adventures and Paranormal State.

Not only do nearly one in five Americans now believe in ghosts, but also they claim to have seen one, a number that has doubled over the past decade since Ghost Hunters debuted in 2004. That’s according to a 2009 poll by the Pew Forum on Religion and Public Life. (The Pew poll is conservative compared to others inquiring simply about beliefs: 48 percent of Americans believe in ghosts, according to a poll that same year by CBS; 45 percent, according to a poll earlier this year by the Huffington Post.)

More than one in three feel they’ve been in contact with the dead, whether that’s through a ghost, a psychic or other means. Among white evangelical Christians, that number is at 20 percent; it’s higher still among white mainline Protestants (29 percent), black Protestants (37) and white Catholics (35), according to Pew.

“There are a lot of people with an interest in (the paranormal), but they don’t feel like they can go to a pastor,” says Eric James.

James is his middle name: The Oklahoman grew up Southern Baptist, attended a Baptist university and now works for a Baptist church, and he’s worried what the church’s response would be if other leaders knew he was asking these questions, he says. His mother once had asked a pastor at a Wednesday night church service what the Bible had to say about ghosts. The pastor had dismissed her question.

“That’s where people get into using Ouija boards and different things like that.”

James has found his answers in the Bible.

What Is a Ghost?

There are nearly as many theories as to what a ghost is as there are investigators. Most popular in American culture is the theory ghosts are the spirits of humans who have died, but not yet “crossed over” to heaven or hell.

On the other hand, most Christians believe that, as Ron Rhodes writes, “When people encounter a genuine spirit, it is not a dead human, but rather a demonic spirit intent on deceiving living humans.”

In his book The Truth Behind Ghosts, Mediums, and Psychic Phenomena, the president of Reasoning from the Scriptures Ministries points to Bible verses like 2 Corinthians 5:8 and Hebrews 9:27 that suggest after death, we go immediately to heaven or hell, leaving no room for the souls of the departed to roam the earth. He also points to passages like Deuteronomy 18:10-12a that forbid communicating with the dead:

“Let no one be found among you who sacrifices their son or daughter in the fire, who practices divination or sorcery, interprets omens, engages in witchcraft, or casts spells or who is a medium or spiritist or who consults the dead. Anyone who does these things is detestable to the Lord.”

Ghosts in the Bible

The overwhelming preponderance of evangelical experts say the Christian worldview does not allow for ghosts haunting the earth.

The Bible is very clear on two points, on which nearly all denominations agree.

First, any spirit that is not God is not to be trifled with. The Bible repeatedly and firmly condemns seeking out the dead.

Second, and crucially, diabolical spirits can and do take on kindly appearances. This can mean looking like angelic beings or, perhaps, deceased loved ones. All spirits are to be tested against what we know from Scripture.

There are some believers, like James , who point to Scripture passages he believes allow for the possibility of ghosts. He points to verses that suggest the soul may “sleep” or enter a “holding place” until Judgment Day, such as Revelation 20:11-15 and Matthew 26:31-46.

He’s not the first person to suggest this: Jehovah’s Witnesses and Seventh Day Adventists accept the idea of “soul sleep.” That theological concept is not generally interpreted to allow for souls to be out roaming around, but James says that such an interpretation could leave a little theological wiggle room for a human spirit to wander the earth as a ghost after death. And there are a few Roman Catholic theologians who allow that some of the deceased may go through a sort of earthly Purgatory in which they can appear to the living.

However, nearly all evangelical interpretations take verses like 2 Corinthians 5:8 (“We are confident, yes, well pleased rather to be absent from the body and to be present with the Lord.”) to mean that souls don’t linger after they die.

Pari, for his part, says he doesn’t believe “a loving God would trap a soul here.” He does, however, leave open the possibility that the likeness of earthly bodies may occasionally be used by God. “I think that heaven just really isn’t as far away as people think it is,” he says.

That’s the line taken by those who point to biblical passages like the one in 1 Samuel 28:7-20, in which King Saul uses a medium (referred to as the Witch of Endor) to communicate with the dead spirit of God’s prophet Samuel. Other than the Transfiguration (an exceptional case in which Jesus appeared before a few of his disciples in his full glory with Moses and Elijah), it’s the only Bible story to explicitly feature someone attempting to communicate with the dead.

In this case, it does seem to work, though scholars are divided as to whether the spirit Saul talked to was actually the ghost of Samuel, a demonic apparition or something else. The traditional rabbinical view is that the figure was indeed Samuel, and that this was an exceptionally rare case, as evidenced by the fact that the witch herself seems more surprised by Samuel’s appearance than anyone. Modern evangelical experts are more likely to interpret this as a different force altogether.

All, however, are sure of one thing: In attempting to communicate with the dead, Saul was doing something that God has expressly forbidden. The point of the story is not to help believers get an understanding of ghosts—it’s to show how far Saul had fallen out of God’s will.

Why Is This Important?

James independently published a book earlier this year working through some of his questions about the paranormal, “Are Ghosts Biblical?” It’s not the final word on ghosts, he admits, but he thinks taking seriously people’s experiences and bringing light to their questions is important.

The Church shouldn’t be afraid of these questions, he says. Too many people are afraid of being mocked or dismissed for bringing up the topic within church. Christians need to carefully and lovingly listen to people’s experiences.

“If you believe in God and you believe in Christ, there’s nothing that can harm you in terms of a … demonic spirit because you always have the greater spirit, the Holy Spirit. You have the most powerful spirit out there,” he says.

That, however, shouldn’t be taken as invitation to go looking for trouble. The Bible is firm on what spirits we should and should not be seeking out. The Holy Spirit has been sent to guide believers, is sufficient for all our needs and is the only Spirit we should be seeking to commune with.

In fact, we were designed to commune with Him.

Emily McFarlan Miller is an awards-winning education reporter and adventurer, a social media-er, a Christian, and Chicagoan. Mostly, she writes. Connect with her at http://www.emmillerwrites.com/