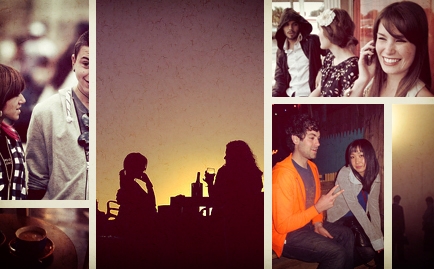 We all have friends who aren’t Christians. And we’ve probably all tried to "argue them in" at some point or another. If you’ve never tried this technique yourself, it’s probably because you’ve seen it done (poorly) in your life. You grew up hearing pastors and teachers dismissing atheists with pithy little statements or platitudes that don’t actually work when you meet a real atheist—especially if it’s someone you’re friends with.

Some people will remember the hype surrounding the conversion of the late Antony Flew, author of Atheistic Humanism. In 2001, an avalanche of emails, sermon asides and magazine blurbs celebrated Flew’s change of thinking. In 2004, an interview by Gary Habermas was reprinted in Christianity Today under the title “Atheist Becomes Theist”—a title Flew, himself, approved of. Apologists—people who use logic to defend faith—were downright giddy; this was a great Christian conquest over doubt.

But Flew’s “conversion” amounted to a minor intellectual shift—from seeing the universe as random to admitting its intelligent design. “I understand why Christians are excited,” Flew said in the CT interview, “but if they think I am going to become a convert to Christ in the near future, they are very much mistaken."

Is it possible many Christian scholars today misunderstand the Great Commission? Perhaps they read it this way: Go and convert all to an intellectual acceptance of My existence. And behold, My philosophical proofs are with you always, even to the end of the age.

Many Christians today seek to break the bonds of the current rationalistic, apologetics-driven approach to evangelism and discipleship. They want to move beyond black-and-white thinking, hyper-literalism and a purely intellectualized faith. These Christians are talking about having conversations instead of debates. They read the Bible as a story rather than a systematic manual for how to live. For them, Christianity is about relationships, not just about theology. Such leanings are often dismissed as touchy-feely and anti-intellectual, but there is a growing body of ideas labeled theopoetics that provides a structure to this holistic approach.

Theopoetics of the Bible

Stanley Hopper and David Leroy Miller coined the term “theopoetics” in the 1960s to describe a new approach to human interaction with God. They suggested that grappling with God is closer to poetry than to logical inquiry. Along with reason and science, they acknowledged beauty and goodness as important aspects of Christian growth. Theopoetics blends theory and application by recognizing the transforming power of true belief, which is more than just mental agreement. The Word of God has intrinsic goodness and beauty, and it is life-giving. It is healthy.

The Bible is also literature. Like any artistic work, it is studied in context. Authorial intent, aesthetic value and the reader’s assumptions all influence the way we understand it. At the 2007 Theological Philosophical Conversation in Philadelphia, contemporary philosopher John Caputo said: “There is no escaping your presuppositions; they shape us, form us and inform us, and that is not bad; that is not a failure or defect in the way we are constituted. That is who we are. So the idea is not to get rid of our presuppositions, but to penetrate them all the more deeply.”

Doing theopoetics means treating the Bible as we do other literary works—as soon as the ink leaves the author’s pen, his words are subject to different interpretations in different contexts.

Theopoetics provides a foundation for conversational apologetics. Merold Westphal, in “Atheism for Lent,” writes: “Not many atheists got to where they are because they became disenchanted with proofs for the existence of God, just as very few believers came to belief by finding these proofs convincing. Psychological, social and moral factors play a large role in both directions.” Realizing this, a Christian will engage with the atheist by acknowledging the confusion and misrepresentations on both sides. The Christian must take a learner’s posture and accept the accusations of atheism as critiques to be worked through, not disproved. Ideally, both sides will open up to mutual respect and reconstruction. Theopoetics is not anti-intellectual—it requires creativity to recognize these complexities, which is an intellectual and intuitive process.

Theopoetics tries to engage whole persons—which includes what they know and what they don’t know. It makes use of both reason and intuition. It embraces subtle shades of meaning, instead of insisting on the black and white. It admits doubt, confusion and paradox as organic aspects of faith. It isn’t afraid of not knowing. Practically, this involves deep humility; there is no room for the televangelist’s smugness. This is nothing new; in a vision, Christ said to Paul, “My power is made perfect in weakness” (2 Corinthians 12:9). Where we lack is where Christ thrives.

If Christianity is true, it can contribute to and engage with culture. Visionaries are needed—people who can creatively consider God, faith and culture through art, film, literature, science, sociology and politics. In an article titled “Worshipping a Flying Teapot?” Randal Rauser proposes that “Christians should shift from focusing on logical argumentation to the multidimensional needs and concerns of persons, situating the rightful and strategic use of arguments within the broader context and concern for cultural renewal.”

A distinction must be made between Christianity’s rational truth and its tangible value. Those who stress the former create logical arguments—which make sense to those who already believe—but they can cause unbelievers to view faith as increasingly implausible; belief in God begins to look like belief in Santa Claus or a giant flying teapot. To correct this, the Gospel should not be seen as a simple worldview to sign up for, but as God’s message of hope and of creation’s restoration.

In the end, Flew merely converted from one intellectual camp to another when he admitted God might exist; all the footnotes, research and intellectual hair-splitting could not convince him of the value of faith. Perhaps what he needed was to sit down and share a meal with a friend, talking about life and Jesus.

Robert Kirkendall is a writer living in California.