Several years ago, I made my annual Nov. 1 visit to the local grocery store—it’s no secret that the day after Halloween is the best day on Earth to buy candy—ready to buy loads of half-priced candy, unclaimed by that year’s Halloween extravaganza. Walking into that grocery store that day I was amazed at how quickly the Halloween fanfare had faded, surrendering aisles and aisles of miscellanea to the next big holiday on the retail calendar: Christmas? White, green and red as far as the eye could see; ornaments, wrapping paper, lights, trees, candy, all en masse. Offerings of a hopeful retail season when sales, according to Wall Street, determine the kind of Christmas we will have.

I recently heard a pastor talk about a church-sponsored yard sale where members were encouraged to reduce the excess in their homes contributing to the makeshift yard sale, with just one catch: all proceeds went to the church benevolence fund. The pastor had recently returned from Haiti, ruined by what he’d witnessed just a few hundred miles from his home in the United States. The following Sunday he gave a praise report to the congregation for the work they had collectively done, confessing that he and his wife had sold around $800 worth of their stuff. He then said something that resonated with me; he said, “We got home that day and looked around and didn’t even notice anything was missing.”

Seven years ago, I spent some time in Haiti myself. As a youth pastor I’ve been a part of a lot of mission trips and been to a lot of places over the years. I’ve seen a lot of participants stand up in front of a lot of people and talk about how a trip changed their life and how they would live from then on, only to see much of the emotion fade within just a few days or weeks. Haiti is a place I will never forget with memories that have been burned into my mind. I knew what the pastor was experiencing when he came back and he was confronted with his stuff. I carried away car loads in the weeks following my return, only to return to my living room feeling as if it had all grown back.

There once was a day when another little holiday carried with it a little more meaning. It’s a holiday rather opposite of Halloween; a holiday unlike what Christmas, at times, has become. This holiday, which could very well have the power to redeem and recover the lost meaning of Christmas, is a simple day to remember that God is good and He provides. It’s a day to celebrate family; share secret recipes; hold a feast together and remember a journey.

Nov. 11, 1620: the Mayflower arrives. You have a group of people, 102 passengers and 25 crew, who, for the most part, knew nothing about settling new land. They didn’t wear the little top hats and belt buckles. They didn’t even arrive where they were supposed to. They were aiming for a settlement in northern Virginia; they ended up in a much colder Cape Cod, Mass., right as winter was starting. They lived on the boat through March, then came off to settle the Plymouth colony. That colony was first set up so that nobody owned land but everybody was to work and share the fruits of their labor. Problem was, nothing got done; there was no real incentive to work, so Gov. William Bradford gave each man ownership of his own tract of land. The result: a bountiful early harvest in 1621. A feast of celebration was prepared. Wampanoag Chief Massasoit, who may very well be responsible for the survival of these first settlers, was invited to the first feast of the harvest. They most likely ate venison and duck; most of the food at that feast probably came from the Native Americans. Just days before the Thanksgiving feast, many historians believe Pilgrim named Myles Standish was leading a group of Pilgrim men trying to kill the local chief. That’ll make an interesting feast! It wasn’t perfect; there’s a lot of myth surrounding it, and yet by the time Lincoln proclaimed it a national holiday in 1863 (two years before the Civil War ended and in a time where our country suffered), celebrations of thanks starting with that first feast in 1621 had been so widely celebrated that Lincoln’s proclamation felt only natural.

Lincoln opened that proclamation with these words:

“The year that is drawing toward its close has been filled with the blessings of fruitful fields and healthful skies. To these bounties, which are so constantly enjoyed that we are prone to forget the source from which they come, others have been added which are of so extraordinary a nature that they cannot fail to penetrate and soften even the heart which is habitually insensible to the ever-watchful providence of Almighty God.”

The local supermarkets will sell many turkeys and all the fixings, but there aren’t sale catalogs or gift wrapping booths or no-interest financing offers. You can’t bottle up thankfulness and sell it for a profit. Some Black Friday sales begin just hours after it ends, almost as if it is given the quickest send off possible, but for a brief moment it stands as a starting point and a reminder of the season to come and the real reason we celebrate. To dismiss it as insignificant is to forget that everything is a gift; life itself is a gift. Many will know somebody this year who will be celebrating their first Thanksgiving or Christmas without someone special: a dad, a mom, a brother, a sister, a husband, a wife. Our time, this life, all provision … it’s all a gift. To even honor God requires a thankful heart.

If we celebrated Thanksgiving 2010 with a shift in perspective—thankfulness once again the end, not the means—what would look different? Envision it: an entire day in an attitude of thanksgiving; store advertisements, shopping lists and holiday planning aside, asking God to birth in us the true heart of the ultimate gift and why we even celebrate Christmas.

The most memorable Christmases for me were the ones where we had little in the way of material things but held fast to each other in thanks. Last Sunday on my way to church, I drove by an electronic billboard, flashing with intrusive urgency: “Only 12 days until Black Friday.” May God teach us to honor Him with the rhythm of thankful hearts. 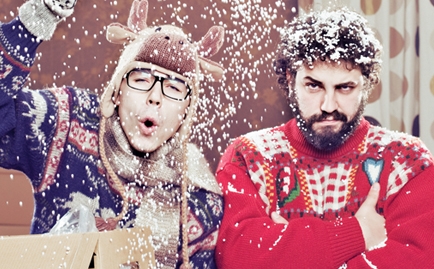 Deck the Halls, Not Your Family