I remember the first time I met someone with HIV/AIDS.

Her name was Princess.

She was from Zambia and was touring the U.S. speaking and working to inspire people like me to put compassion into action when it came to HIV/AIDS relief. There were about 20 of us who had lunch with her one day and heard her story. As she sat and talked, I tried looking through her skin to see if I could see the virus. I looked for signs she was sick. Listened for coughs. But after studying her body and looking for any clues that might point to her having contracted HIV I was left with no evidence. She spoke passionately about what it was like to live with HIV/AIDS and the toll it had taken on her family and on her country. She told us about the reality that in some parts of Africa, every 14 seconds a child is orphaned because his/her parents die of AIDS.

So depending on how fast a reader you are, and depending on whether or not you leave to get the phone or go to the bathroom in the middle of reading this, by the time you finish reading this one run-on sentence, another child

When Princess was finished speaking I had the opportunity to meet her. I walked up to her and reached out my hand to shake hers. She wasn’t satisfied with a handshake. She drew me close and embraced me. Before I could wiggle my awkward white body out of her firm, dark frame, she planted a kiss right on my cheek. Right next to my mouth. And I loved it. I loved it because it felt like my way of saying I wouldn’t be scared of disease. I loved it because I felt like I joined with my sister Princess in announcing this disease might rob her of life at some point, but it wouldn’t rob her of hugs and kisses.

Then I met Bob. Bob is the kind of guy who will never make any headlines and there won’t be books written about him. But there should be.

One afternoon in December, Bob and I rode around our community delivering Christmas presents to some of the clients his center cares for. Some friends of mine had gone out and filled up huge bags full of Christmas presents for these families, and now I got to go and play Santa. Bob lit up as we walked into each home. We would spend time talking with his clients living with HIV and catch up with how they were feeling and if their meds were working well for them. We would ask them about their holiday plans. And then we would just hug. And while we hugged, we would pray. But I got the sense the hug was in itself the prayer.

My friend Rick used to work in a hospital in South Carolina. He told me that oftentimes, if the staff knew a patient was close to dying, the care they received wouldn’t be as thorough as it was when there was a chance of them recovering. For instance, they may not get bathed as frequently or their sheets might not be changed out as regularly. One day, Rick walked into the room of a woman who was dying from AIDS. She was close to death and everyone knew it. It was apparent she would see the sunset of her life fade into night surrounded by the stale walls of a small hospital room in Columbia with few, if any, to grieve.

So Rick was by her side doing the things he normally did to care for patients. He tightened up his latex gloves and got to work changing out her sheets and cleaning her up. He finished his work and headed out toward the door and the next patient. But then he stopped at the door. He thought about this woman. He thought about Jesus.

He went back over to the woman who would soon breathe no more. He sat down next to her, took off his latex gloves and held her hand.

And she told him, “This is the first time anyone has touched me without gloves on in two years.”

And this is why we anxiously await Christmas. Because if the story of the incarnation is anything, it is a story of a God who loves being skin to skin. A God who wasn’t satisfied with keeping the latex gloves on. Rather, this is a God revealed in the person of Jesus who would enter into this world by way of a dirty cave. And this is why those stories of Princess, and Bob and Rick inspire us so much. Because they remind us of a God who would be willing to get skin to skin with us. A God who wouldn’t let disease, in any form, keep Him from kissing humanity in the person of Jesus.

And this is why Princess, Bob and Rick all live the way they do. They believe that as they go and care for the needs of those around them, they are, in a very real way, putting on display this God who became human so we could become human. They believe they are bringing Jesus into this world, putting flesh and bone on Him, as they sit and hold hands with someone dying or hug someone who hasn’t been hugged in weeks.

Because each one of these incarnational acts tells a story.

The story of Christmas.

The story of a God who loves being skin to skin with us.

Jason is a teaching pastor at LCBC Church in Central PA. You can find more of his writing at clearlyvague.blogspot.com. 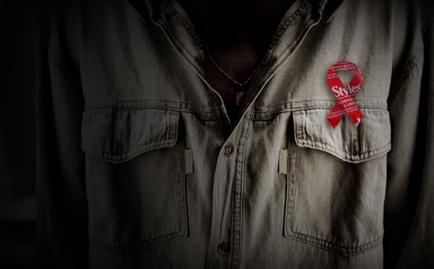