On Monday, pastor Eugene Cho was announced as the new president of Bread for the World, the huge Christian anti-hunger and poverty organization. He’ll be taking over for Reverend David Beckmann, who’s been president there since 1991.

In a press release, John Carr, chair of Bread’s board of directors, explained why Eugene made sense as the new leader. “Eugene is the leader who can help Bread for the World end hunger and bring our mission to the next generation. He is a committed Christian, clear thinker, compelling speaker and dynamic pastor. Eugene is a passionate advocate for justice who can build on Bread’s strengths and will powerfully connect faith and action to help bring the end of hunger.”

Cho is also a pastor and we recently talked to him about his new book Thou Shall Not Be a Jerk: A Christian’s Guide to Engaging Politics. Here’s Cho’s thoughts on how Christians can learn to take politics seriously without being mean about them.

RELEVANT: It seems like whenever politics come up, Christians accuse other Christians of being divisive. Do you think that’s a fair critique?

I think that’s a question that we should be wrestling with. When someone gives me a criticism like, “You’re being divisive, Eugene” I don’t want to just ignore it. I think we should respond and take to heart criticisms that we get, particularly from the Body of Christ — and those outside the larger body too. We live in a culture where there is so much anger and outrage that it’s easy to become desensitized or apathetic to it. We don’t take to heart some of the criticism that we’re getting.

Having said that, I think sometimes when people bring up “you’re being divisive” and  “you’re disrupting the peace”, I sometimes gently try to pastorally push back. Because I want to have a conversation. I want to ask if there’s a difference between peacemaking and peacekeeping? And sometimes I think peacekeeping might be, if we’re gonna be blunt, a voice in our head that says, “You know what? Things are working well for me, let’s keep the peace.”

Whereas peacemaking, I think, has some sort of a prophetic power to be able to examine that, yes, it might work for some, but politics is governance for all we need to be mindful of others. And particularly for us as Christians — what does it mean for followers of Christ to be formed and transformed by the ethics of Christ embodied in God’s Word and His ministry?

So speaking the truth may be divisive on a temporal level but on a broader, eternal level, might end up bringing the Kingdom together?

I think so. We all know that life is incredibly complex. Politics are incredibly complex. Anytime someone makes things overly simplistic we’re doing ourselves and others a disservice. I don’t want to make it sound like it’s an easy formula by any means.

We have a very elevated perspective of Dr. King. Very well-loved, one of the most respected people in the world today. And a lot of folks don’t realize that during the height of his public ministry, he was according to one poll, “the most detested person in America”.

The last Gallup poll before he was assassinated, his unfavorables were in the 60s. I think we have a tendency of sanitizing and Disney-izing his ministry. There was a cost to it. I think in that same way when we’re pursuing certain things —  when we’re pursuing justice, pursuing God’s Kingdom — I think that there is going to be a cost. At times there might be good responses. At others, there might be really strong pushback as well.

What do you are the most common misconceptions Christians have about engaging politically in America?

Three things come to mind. One: we choose to disengage from politics. When I was young, I would tell myself, because I was told by other leaders, to just focus on spiritual things like church, quiet time and Bible study. That was spiritual, and engaging policies was not spiritual. It was of the world. There are still folks who for whatever reason — it could be because of what I would consider a dangerous theology, they could be apathetic, maybe they’re just exhausted — they’ve chosen to disengage altogether.

And then there are those who, whether we can see it or not, have let politics become the most important thing. Our politics informs our theology, as opposed to our theology informing our politics. And I think when we care so much about politics, whether we know it or not, it can grow to be idolatrous. As a result, we see everything through those filters. We justify all our actions based upon our political ideology.

And then there’s a third group of folks. They’re folks who are engaged in politics but have become byproducts of what I would call Cultural Christianity. It doesn’t always parallel the life and words and sacrifice and grace of Jesus. It’s become its own entity, enamored by power. I think that’s also very dangerous. Preachers can be guilty of this. I can be guilty. Politicians can be guilty. We dabble a little Jesus and sprinkle him on top of things. As a result, it causes a grave disservice to the witness of Christ in our world.

I think we’re seeing some of that. A lot of people are being disillusioned by the witness of Christians.

Historically, a majority of white Christians have been considered to be in the tank for the Republican Party. That’s become distressing for some Christians given some of the actions of the current administration. There’s also a group that’s maybe a little more progressive, saying that’s a little more in line with their interpretation of biblical teaching. But you’re saying there’s a danger in both sides.

I’m not suggesting that people shouldn’t engage politics. Politics matter because it informs policies that impact people. Last time I checked the Bible, God cares about people — particularly those who might be marginalized in our society. What makes, in my opinion, a society more consistent with the heart of God is a society that, yes, has good governance but also has a passion for those who are vulnerable and marginalized. Politics matter.

We should not go to bed with any political party. I have friends who work in D.C. and I have friends who work on campaigns and such, I’m not knocking them. I think they have a certain conviction. I think there’s a difference between engaging it and believing that politics itself is the salvation of our society and world. There’s a balance. We know that it matters, but it’s not the most important thing.

So when people ask me the question “Eugene, are you a Republican or Democrat?” My honest response “what issue?” Are you saying that one party has a monopoly on all the things we believe to parallel to God’s heart? That’s a complex conversation. But I don’t believe that a party has a monopoly on God’s kingdom, even though that’s the rhetoric that comes out from the left or the right.

When I was in college, I was told: “Good Christians vote Republican.” You don’t ask questions. You just vote Republican. I had a friend who would tell me that in his living room, there was a picture of Jesus and then right next to him was Ronald Reagan. He grew up in a culture where that’s what he was taught.

Now, I live in Seattle. And I think Seattle could be a poster child of the religious left. Stats have shown that the percentage of people that voted Republican [here in Seattle] was really minimal. So I find some of the same rhetoric that I experienced 20-25 years ago — the condescending attitude of “if you’re a real Christian, don’t even think about it. Vote Democrat.” Some people call that identity politics or identity theology, but it concerns me as well. We should not stop thinking. We should not stop wrestling. While we engage politics, we have to ultimately remind ourselves that politics itself is not our salvation.

Some Christians argue that while it sounds nice to be able to pick and choose your policy ideals piecemeal, the reality is that you have to work within the system and think practically if you want to see any real progress.

When Jesus came, I suspect much of the criticism was “you’re not being practical, you’ve got to play with the system.” I understand that there’s a reality for us to engage real systems, real processes and real mechanisms. But the danger of that kind of comment is for us to have an absolute defeatist, fatalistic perspective and just say as a Church “we’re just victims of the larger machine in our world and we have to abide by it.”

I don’t think that is reflective of the Kingdom of God. I think it’s dangerous. While we seek to be practical, I think we also ought to be mindful of Jesus and His words. We’re talking about the Sermon on the Mount being the ethic that forms us. I would rather seek to honor Christ, and that’s the challenge I have for the Church as well.

So what, then, should Christians do keep from getting mean about politics? How do we push for a better way?

One of the biggest temptations in our world today is to dehumanize those we disagree with and in that process, we actually don’t know that we’ve done it. Not only does it harm the other person we’re bullying or mocking, but I think there’s something that’s being lost in our own soul flourishing as well. We have to keep naming it and acknowledging it.

You can read more about Eugene Cho’s new role at Bread for the World here. You can purchase Thou Shall Not Be a Jerk here.

‘Love God, Love People’ Is More Than Your Instagram Bio 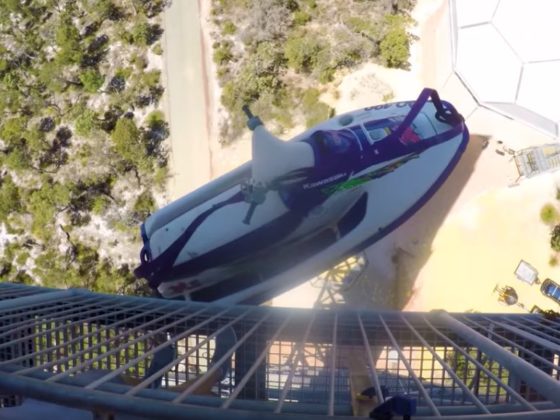 Want to See a Jet Ski Dropped Off of a Tower onto the World’s Strongest Trampoline?