Have you ever had a knee-jerk negative reaction when your favorite television show displayed some overly sexualized content? What about the content offended you?

I recently had a conversation with a teenager who was deeply offended by The Walking Dead’s inclusion of gay characters. He reeled at me asking, “Do you find you struggle with same-sex attraction?” His reply was nothing short of outrage; why would a pastor even ask such a thing?

The point I wanted to emphasize was his imbalanced judgment of the sins of others and his desensitization to his own. While I’ve struggled with episodes of The Walking Dead as well, it has nothing to do with its portrayal of homosexuality. Instead, its portrayal of human nature and depravity hits so close to reality and, if I’m honest, my own heart.

The great teacher, Jesus, comically illustrated this convenient oversight of our own sin when highlighting the sins of others by depicting a man with a log sticking out of his eye “generously” offering to remove a small speck from the eye of another. (Matthew 7:3-5) Why such offense at the inclusion of homosexual characters and no offense at the heterosexual sin, the murder or the overarching theme in which the ends always justify the brutal means?

In a fallen world—the fictitious one of The Walking Dead, or the real one we currently inhabit—you will meet people who live lifestyles contrary to the Bible’s ideal. Here are three relational tools to keep in mind when navigating interactions with those who hold different beliefs than we do:

Expect the Lost to Act Lost.

One reason Jesus gained influence among the lost of His day was because He didn’t react in disgust at their lostness. (John 8:7) Our expectations are out of whack when we expect Hollywood protagonists to all be of the biblically faithful married type. It’s unrealistic not only because Hollywood houses a lot of sexual sinners—but because humanity as a whole is made up of a lot of sexually immoral people.

Part of the attraction we as humans feel toward the art of film is its ability to capture and depict real life. Sexual sin will be portrayed in film because it exists in real life and the majority of filmmakers are not trying to honor God with their art.

All of this is to say that we should not be surprised when interacting with non-Christians that they act in a … wait for it … non-Christian way. We lose our platform and the ability to be taken seriously when we react in a morally superior or surprised manner at the sins of others.

The devil’s job is to accuse and condemn. Rather than join him in that endeavor we should join Jesus in His search and rescue mission for the lost. Don’t act surprised when they act like lost people.

But there’s another reason Jesus was able to influence the culture of his day. He invited them in.

The us vs. them mentality that labels and judges all non-Christians is ineffective at winning friends and influencing people. At best it makes you look insecure and foolish, at worst it gives Christians as a whole a bad name.

Jesus, on the other hand was called a friend of sinners. (Luke 7:34) His harshest judgements were made, not on the sexually immoral, but on the self-righteous religious. (Matthew 23) To them He said that, “the prostitutes go into the kingdom of God before you.” (Matthew 21:31)

He invited them into relationship with Him and didn’t hesitate to accept their invitations to dine at their houses. He took a seat at their table because it was the best place from which to influence them and tell them about His coming Kingdom.

Likewise, if we are going to be imitators of Christ, we should find ways to include and invite lost people into relationship with us. Associating with only Christians gives you more in common with the Pharisees than Jesus.

Jesus came to call sinners and proclaim the Kingdom of God to them. And we do well to remember just how subversive that Kingdom is.

Love Them Better Than the World Does.

The hostilities of a fallen world provide a perfect environment by which a sinless man would be put to death. Yet, in the disruptive and upside-down nature of the Kingdom of God this was necessary in order to usher in a new reign. One that would be ruled not by an iron fist but by a lamb that was slain.

Jesus’ kingdom is one in which enemies are to be loved. Love is the distinguishing mark of the Christian.

The fallen world excels at pitting people against each other. This is just as evident in the newspaper as it is in the war between Alexandria and the Saviors. Alternately, the Kingdom of God will usher in peace. We are representatives of that Kingdom.

Peace that welcomes in the far-off sinner is more unsettling than confirming the hate that already exists in the hearts of sinful man. Being for sinners entering the Kingdom leaves a greater impression than being against their sin.

The Bible tells us that “God’s kindness is meant to lead us to repentance” (Romans 2:4) and that we are to “overcome evil with good.” (Romans 12:21) These ideas strung together imply that Christians—if they are to influence a non-believing world for Jesus—should model the kindness and goodness of God if they want to see others repent and worship him.

After all, many of them may end up entering the Kingdom before us because in it the last will be first, and the first last. (Matthew 20:16)

is a Christ follower, father, pastor, teacher, and rap music enthusiast who moved to Baltimore from Upstate New York. You can read more by him at www.familylifepastor.org and follow him on Twitter. 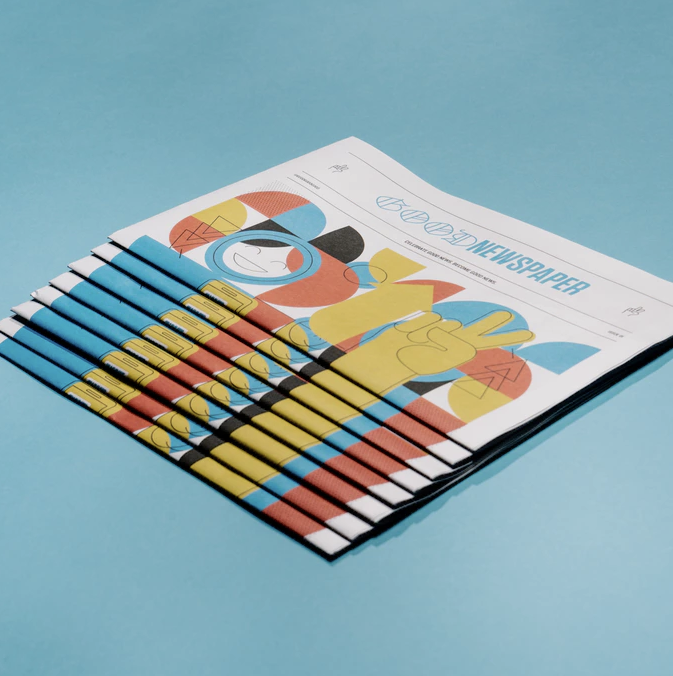 This Kickstarter Is Raising Money to Create a ‘Goodnewspaper’