I was just a clueless C-plus college student, semi-active in local ministry, when a nurse offered me a job at a mental hospital just past town.

“You seem pretty good with people,” she said. “Could you use a little extra cash?”

My church considered psychology a second cousin to witchcraft, so I caught pastor Reddy after service to get his thoughts. “I feel a peace about it, brother,” he said. “You can help teach those people about Jesus. God could use you to change a person’s heart.”

Given Reddy’s blessing, I accepted the job. The psych ward rushed me through orientation and threw me in over my head. I covered every unit, drove the van and manned the crisis line overnight. I delivered addicts to AA, wrestled psychotic sex fiends, talked suicidal jumpers off the ledge, chased naked patients through the woods behind the interstate, hacked through nooses, led support groups for obsessive-compulsive recluses and busted windows in rundown singlewides to rescue hallucinating prostitutes.

I felt justified—and super-spiritual, to boot. I was reaching down to the “least of these,” charging into the fire with reckless faith.

Then I prayed this crazy prayer: “OK God, let’s go. Show me what you want me to see.”

Late one Sunday, a drunk who looked like Blue from Old School told me that maybe grace was amazing because God walked a mile in our shoes and saw how difficult and confusing life can be. Then he climbed a bus bench and sang “Amazing Grace.” He might have been tipsy, but his sermon stuck with me for a very long time.

When my girlfriend dumped me, an anorexic stripper struggling to kick cocaine took my hands and said, “Jamie, we gotta let go of things we can’t control or ever understand.”

Back at my church, things were falling apart. The couple who taught the marriage seminar split, the music minister vanished and the preacher’s wife chewed me out for parking in her space one afternoon. Everything I thought I knew was being turned upside down. I didn’t know what to think anymore.

So I tried not to think and pushed on.

I had a van full of schizophrenics and stopped to fill the tank. A trio of street thugs started harassing me when I walked up to pay. I tried talking calmly as the lead goon grinned and twisted a chain around his fist. The van door slammed open. My patients stormed over. Even the toughest thugs won’t tangle with a pack of wild-eyed schizophrenics.

“Trouble’s worth it,” said Norman, whose forehead was laced with stiches and scars. “We gotta watch out for each other. Each other is all we got.”

The church finance manager got caught siphoning cash. An associate pastor was fired and forced to tell the congregation that God had called him away. An evangelist packed the altars, then two weeks later, I admitted him into rehab.

A tattoo artist with increasing episodes of self-harm told me, “Brother, listen. Most everybody feels like they’re doing the best they can.”

Sometimes, I felt called to the ministry. I’d been working on a little collection of messages and I had some pretty clever catch phrases. That’s what I thought ministry was: telling people how to fix their lives. But my church was falling apart, and the mental hospital was starting to feel like home.

A bulldozer mechanic with panic disorder tutored me on statistical analysis the night before a big exam. A bipolar card shark slipped me two 20s so I could buy a textbook. I sang hymns with a manically depressed house painter on the high rail at the river bridge. I had communion in a side cell with an inmate who gave me half his tray.

Truth came from strange places in the Bible. Outlaws, loners and loose women. Jesus ran with a rough crowd. And He warned the religious about labels and easy assumptions. Those people you’re calling lost might be closer to the Kingdom than you.

One patient bit me and another kicked me and I racked up my umpteenth concussion when a guy who thought he was Satan smashed me with a chair. Junkies taught me Greek and a schizoaffective kleptomaniac gave me a motel Bible in which he had drawn an elaborate illustration of me standing on a mountain surrounded by crows. “Jamie, ah,” the klepto explained. “In Hebrew that means one born for revolution.”

A homeless woman called the hotline when her husband started hearing voices in the night. I met them at a diner off 9th, figuring we’d talk and I’d treat. But when I pulled out my wallet, the waitress informed me they’d already paid. “Aw, we don’t mind,” the husband said softly. “We just happy to have company for a change.”

In the parking lot, they laid hands on my shoulders and prayed. “Open his eyes to your mercy, Lord.” So I opened my eyes and we laughed at the big truck’s horn blaring as it passed us on the street. “God, lead Jamie,” the woman said. “Show him everything you want him to see.”

The backslidden evangelist ended up being a model patient and returned to encourage his peers.

“Call me anytime,” he told me. “You got somebody I can help, I don’t care how late it is.”

The church couple that split emerged a lot more humble, and when the music minister reappeared he told me that for once in his life, he felt honest. The preacher’s wife who lit into me for parking in her space? She snuck a stack of money into my hand and said, “Baby, I know you meet a lot of people in need.”

It was truly a season of mad epiphanies. I stopped trying to figure things out. I stopped talking, tried to listen better and learned to appreciate silence. I gave up any notion of ministry past showing up and trying to live in that one small moment struggling people share. The things that divide us grow dim in desperate hours. We are all so much the same.

We are all the least of these.

It was Sunday evening, several months after I started at the psychward. Pastor Reddy caught me after service. “How’s the mental health mission field going?” he asked.

I tried to find a way to sum it up, to compose the right words to where Reddy could understand. “Remember when you said God could use me to change those people?” I said. “To teach them about the Lord?”

“Pastor, they’re teaching me about Jesus,” I told him. “God’s using the people to change me.”

Jamie Blaine is a licensed sex and suicide specialist. You can pre-order his book, Midnight Jesus, here. He is non-fiction editor of the L.A. literary collective The Nervous Breakdown, music editor of the Salon affiliate The Weeklings, and a former contributor to the world’s only religious satire magazine, The Wittenburg Door. Blaine lives in Nashville, Tennessee.

6 Reasons You Seriously Need to Slow Down 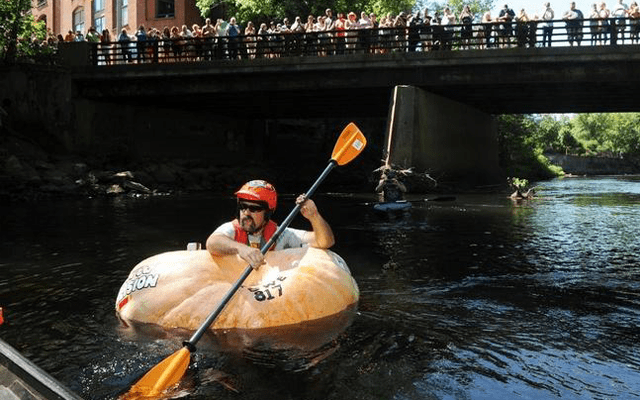 Man Creates a Pumpkin Boat … Because Why Not?