The 'Eighth Grade' director quit stand-up at the peak of his powers. He’s better for it.

AFTER A NEAR-DECADE OF PERFORMING onstage and on the internet, Bo Burnham vanished. He stopped posting videos to his 1.4 million YouTube subscribers, and he stopped the theatrical brand of stand-up comedy that earned him three specials by the time he was 25. People thought he was dead. With the way he went out, can you blame them?

Bo Burnham is not dead. He’s 28. July marked the release of his directorial debut film, Eighth Grade. A coming-of-age movie from independent studio A24, Eighth Grade is wonderful—funny, sweet, full of empathy—and it’s a reflection of the struggle Burnham experienced onstage: He was terrified of performing.

“On the internet, if you don’t put things out every week, you’re dead,” Burnham says. “That’s terrifying. People need space to disappear.”

And as soon as Burnham found space, that’s exactly what he did.

Burnham’s fame arrived in an instant. When he was 16, he wrote a comedy song and put it on YouTube to show his older brother. The video was discovered and redistributed by Break.com, and Burnham had an internet hit on his hands. He kept posting music— always irreverent, always funny—and within a year he had a four-album deal with Comedy Central Records and the same talent agent as Dave Chappelle and Drew Carey.

It was an easier time to exist online. The internet wasn’t as nuanced then. It was just an opportunity.

“I don’t think the internet asked deep questions of us when I was [16],” Burnham says. “It used to be a fun little talent show-slash-bulletin board. It was like, make a MySpace page, make a Facebook page, make a funny little website or post a funny little video about yourself. Now, it asks base questions that are very deep and strange. Now it’s Twitter: What do you think? Instagram: What do you look like? I think the internet’s become primal in what it asks of people emotionally. It’s more personal.”

But through his teenage years, Burnham thrived on any platform. His first stand-up special debuted on Comedy Central when he was 19. Two more would follow via YouTube and Netflix: what. in 2013 and Make Happy in 2016. Burnham’s material grew out of his YouTube channel. He sang, recited poetry, unleashed an assault of musical cues and lighting effects and offered up scathing zinger after scathing zinger. It was barely stand-up, but it was certainly a performance.

People need space to disappear… I’m still getting tweets every day: ‘Did you die?’

And Burnham’s act was meta because he made each performance in its own way about performing. He often twisted the dynamic between himself and the people watching him, exploiting audience expectations to deliver commentary on the whole charade. In one bit in what, Burnham fumbled a water bottle, only for the mistake to trigger a musical cue announcing, “He meant to knock the water over, but you all thought it was an accident. Art is a lie. Nothing is real.”’

Every facet of Burnham’s act was choreographed. His sets were as precise as anything comedy had seen, and that level of control—from the music to the stage direction to the “improvised” interactions with the crowd—makes sense given Burnham’s anxiety. The comedian was crippled by stage fright. He was having panic attacks onstage.

“I’m not naturally wired in the way a lot of performers are, where they just feed off [the attention],” Burnham says. He’s usually an analytical, dense speaker, but here, it sounds like he’s out of breath.

“I mean, have you stood in front of  3,000 people before?” he asks. “That’s already terrifying. It’s just the way anxiety is, to everybody. I needed to talk about my anxiety onstage, or I was never going to do it again.”

That was the impetus behind Burnham’s final special, Make Happy. It’s a blistering and, in some ways, vindictive hour, but Burnham doesn’t present his anxiety in full until the last segment, an eight-minute auto-tuned rant in the style of Kanye West. The first four minutes are satirical and comedic, but halfway through, Burnham stops the pettiness and begins a confession:

It’s a stunning turn. When the song ends, Burnham bows and thanks the crowd and tosses his microphone to the floor. Then he leaves the stage. That was two years ago. He hasn’t been back onstage.

Now, he doesn’t have much to say about the performance: “I meant it. The entire endeavor of getting onstage was terrifying, so talking about it being terrifying made it slightly less terrifying. It was more therapeutic.”

Even so, he still had to leave. “Stand-up wasn’t going to work for what I needed because I was exploring myself through myself,” he says. “I was never going to get out of my own head when I was looking to myself for inspiration. That’s why I wanted to direct: to feel like I’m talking about an idea with other people.”

Anxiety is at the core of Eighth Grade. About a modern middle-schooler named Kayla who struggles to make friends and be herself, Burnham’s movie is full of mortification and awkwardness and fretful anticipation—the emotions baked right into the characters’ phone-centric, image-focused setting. The internet isn’t the center of Eighth Grade—that’s Kayla—but it is the backdrop. It’s been the backdrop of Burnham’s performing career, too, and that parallel is by design.

“I wanted to take inventory of the way the internet felt,” Burnham says. “The internet is everything to me. The internet is good and bad and weird and strange. It makes us, connects us, isolates us, stimulates us, numbs us, all those things. But I didn’t want to make a movie that was some big overarching statement. I wanted to make something granular and emotional.”

A departure from high-minded youth movies like Dead Poets Society or The Perks of Being a Wallflower or Stand by Me, in which kids go through intense traumas to gain wisdom, Eighth Grade’s world-changing moments are low-stakes and common. There aren’t any teen pregnancies or life-changing rebellions here. Instead, there’s a pool party full of unfamiliar kids and an assembly where you’re called out in front of the whole school. It might seem small-minded, but these scenes are excruciating for their familiarity. Eighth Grade is a participatory experience. It will make you hug yourself. You fall for Kayla and her endearing, courageous social ineptitude, but that pain you feel communicates her struggles were your struggles, too. Really, they might be your struggles right now.

“I think the internet makes eighth-graders of us all,” Burnham says. “At that age, you’re just so open and vulnerable, and feelings register as more intense. I wanted a movie that felt visceral, and made intense moments out of very small things that weren’t really that consequential. That’s the story of being 13. The average day is life and death. And that’s the story of anxiety. Anxiety overlays onto really mundane stuff and makes it almost unbearable.”

The internet is everything to me… It makes us, connects us, isolates us, stimulates us, numbs us, all those things.

The internet brings us down to that primal state Burnham mentioned before. We don’t see it as a creative outlet so much as a reflection of self.  It asks us who we want to be, and that makes the minutiae of life feel huge and significant again. Those little insecurities we felt on the outskirts of the birthday party or when we stood up to speak in front of the class are brought back to life every time we post on Facebook, Twitter and Instagram. Will people like me? Will they think I’m funny? Do they think I’m cool?

Those are all deep, lonely questions because like Burnham’s stand-up, our processing system for all those feelings is ourselves. We can’t exorcise our anxieties because we’re anxious about ourselves. We know the internet’s redeeming qualities—it’s changed lives, including Burnham’s—but the prospect of chasing those opportunities is marred by fear and pressure.

“I worry my generation can’t work on longform stuff because the internet demands a constant stream of content,” Burnham says. “I’m still getting tweets every day: ‘Did you die?’ You have to not prioritize people’s perception of you. You have to try to just build the relationship with the work and not the relationship with the audience … which is kind of the opposite of the YouTube stuff,” he adds.

It’s clear Burnham is proud of Eighth Grade. He’s hopeful for the movie but not fretful about it. It seems disappearing did him some good.

“The solution to all anxiety is to actually get out of your own head and communicate and share with other people,” he says. “That’s cathartic, and that’s what the movie did. Anxiety makes me feel like a 13-year-old, but honesty helps you realize these feelings are shared by other people.  It illuminates your experience when people are honest about themselves.”

Bo Burnham used to feel alone when everyone was watching him. Now, he’s battling his confusion with truth, and in doing so he’s marking a path for how we can redeem the toxicity of the digital world. Eighth Grade is an artifact, but it’s timeless. The internet is that way, too. 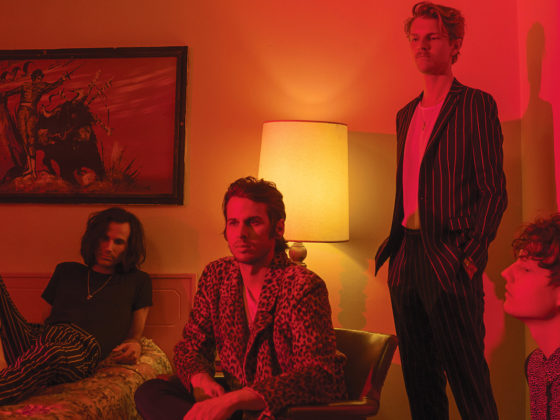