What plays well in the dingy halls of a Manhattan comedy club doesn’t necessarily work the next morning, and Louis C.K. was widely criticized for a comeback attempt, less than a year after he became one of the most prominent faces of American men’s sexual misconduct reckoning.

But a reckoning begun does not mean a reckoning completed, and Louis C.K.’s story has become a common one. Apologies are frequent, and easy enough to deliver, but what about what comes after the apology?

We, all of us, live in public now—with our distant pasts just a click away via social media. This means old mistakes are being brought to light with increasing frequency, and Louis C.K. is far from the only person apologizing for what he’s done. Aziz Ansari, James Franco and James Gunn have all had to reckon with a variety of allegations, while men in positions of political power like President Donald Trump and Supreme Court Justice Brett Kavanaugh will be spending their respective careers trying to stay ahead of the allegations against them, like President Bill Clinton and Supreme Court Justice Clarence Thomas before them.

But in an age of increasing accountability, the pleas for forgiveness and redemption loom large too, which prompts questions about what justice, restitution and second chances ought to look like as well. An increasing cultural prioritization of oppressed voices, who’ve gained ground in their fight to be treated equally, are bringing along with them a new question: What does forgiveness look like in the digital era?

“You are going to upset people,” says Josh Harris, a pastor and author who knows a thing or two about apologizing (see page 18). “If your goal is just to make people happy, people who have been hurt are not going to be impressed with you. They might not forgive you. In fact, it might actually make your life more complicated.”

There can be no honest conversation about forgiveness until there’s been an honest one about wrongdoing. The #MeToo movement was brought to national attention in 2017 by the multiple women who came forward with accusations against former Hollywood movie mogul Harvey Weinstein, with twin takedowns in The New Yorker and The New York Times. The only person in that case who really argued that Weinstein deserved forgiveness was Weinstein himself (in a statement to The Times, he blamed his behavior on coming of age in the ‘60s and ‘70s, saying “that was the culture then”) and virtually no one listened to him. The allegations were too ugly, the evidence too damning and the remorse too obviously hollow to warrant lending his pleas any serious traction.

Your apology needs to match the level of what you think you’ve gotten wrong, and you need to really measure that. – Josh Harris

But soon after, men with more positive social cache than Weinstein were toppled by allegations, and you started hearing rumblings about things going too far. Some of the allegations were from a long time ago. This thing didn’t sound quite as bad as that thing. Can’t these people be forgiven?

“It would take time,” mused Breaking Bad actor Bryan Cranston when asked whether Kevin Spacey—accused of making inappropriate sexual advances against his underage costar—deserved another chance. “It would take a society to forgive them, and it would take tremendous contrition on their part.

And a knowingness that they have a deeply rooted psychological and emotional problem, and it takes years to mend that.”

The bid for second chances has been even louder in the political world, where the threat of upheaval is frequently contained only through herculean effort. Trump became the most recent commander in chief to skirt consequences for a bevy of sexual mis- conduct allegations that broke during the 2016 election cycle. White evangelical voters, 80 percent of whom voted for Trump, rationalized their support in various ways, but the idea of forgiveness was a big one.

“We are all equally bad, we are all sinners, we need Christ’s forgiveness,” Liberty University President Jerry Falwell Jr. told CNN when pressed on his support for Trump despite his multiple indiscretions. “That’s why evangelicals are so quick to forgive Donald Trump when he asks for forgiveness for things that happened 10, 15 years ago.”

This, perhaps inadvertently, raises a key question: Who gets a do-over in modern society? And who gets what they deserve?

Nish Weiseth is an author and activist. She says that society needs to understand that there’s a difference between individual forgiveness, which happens between two wronged parties, and communal forgiveness, in which public restitution is granted corporately.

“Let’s take an example of someone who has apologized and said something terrible, or has done something terrible, in the public space,” she says. “We can forgive them, but what does that forgiveness look like? The only people that can truly answer that question with any sort of authority are the victims: the people that accused them of what happened. But, as a society, we have ask the questions too. Like, what does it look like to forgive a person of influence and power? And what do we do with the fact that they have influence and power, that they want to come back into the public eye?”

This is a common sentiment among people who’ve been hurt by those in power. An apology is made, but it’s often just taken for granted that a contrite spirit is enough to warrant being brought back to the same position of authority. It’s an easy assumption but not, perhaps, a safe one.

This was illustrated in March 2018 by Highpoint Church in Memphis, Tennessee, where pastor Andy Savage faced accusations of a “sexual incident” with a high school student named Jules Woodson from two decades prior, when he’d been in a position of leadership.

Following the accusations, which he had privately disclosed, Savage went on stage at Highpoint and acknowledged what happened. Not unlike Louis C.K. at the Comedy Cellar, he received a standing ovation. “Forgiveness,” as it were, from the church.

But not from Woodson.

“We as a church, of all places, should be getting this right,” Woodson told The Times in an emotional video interview. Savage and the rest of the leadership team were eventually swayed by her protests, and he resigned from his position.

“When Jules cried out for justice, I carelessly turned the topic to my own story of moral change, as if getting my own life in order should help to make up for what she went through and continues to go through,” Savage wrote in a statement. “Apologies are important, but more is required. I know that stepping down once, or even a second time, still doesn’t make things right for Jules. But addressing my own acts of abuse this way acknowledges the importance of confronting abuse in our culture and in the Church at large.” It’s stories like these that demonstrate the difference between lip-service apologies and something more substantive, in which not only is the personal failing repented of, but a broader analysis is conducted of what exactly went wrong at a systemic level.

“We have to evaluate what restitution or what rehabilitation actually looks like,” Weiseth says. “How can we forgive a guy for the harm that he has done, while simultaneously saying just because we forgive him doesn’t mean he should continue to be in the place of power and influence?”

The key, according to Weiseth, is differentiating between forgiving abusers who show genuine repentance and forgiving the power structures in play that keep abusers safe.

“Can we forgive both the person, while not forgiving the structure that has caused the damage?” Weiseth asks. “I think that’s the tension that we’re feeling right now. We should be able to forgive the person and allow that person to be able to rehabilitate and figure out how to make things right, while still not giving space for those oppressive structures to continue.”

In other words, the person who committed the actual abuse is not necessarily the only one at fault.

All of this is made more complicated by the fact that abusers often have a vast network of powerful supporters to fall back on, while their victims are more vulnerable and isolated. Needling questions about why victims don’t speak up sooner or why they can’t remember specific details with more clarity fail to grasp the realities of trauma and embolden abusers to maintain their claims of innocence, for which the public’s bar is far easier to clear.

This is why accused abusers frequently can get away with offering neither a flat denial nor a sincere attempt at repentance. As an example, Spacey released a statement follow- ing the allegations made against him in which he wrote: “If I did behave as [the accuser] describes, I owe him the sincerest apology for what would have been deeply inappropriate drunken behavior.”

Can we forgive a guy for the harm that he has done, while simultaneously saying just because we forgive him doesn’t mean he should continue to be in the place of power and influence? – Nish Weiseth

This leaves open the possibility that Spacey’s accuser is either lying or confused about what happened. It barely counts as an apology.

Louis C.K. released a longer, less cautious statement after the allegations against him. “These stories are true,” he wrote. “The hardest regret to live with is what you’ve done to hurt someone else. And I can hardly wrap my head around the scope of hurt I brought on them.”

And then less than a year later came Louis C.K.’s appearance at the Comedy Cellar. Is nine months enough time to warrant a comeback?

“Is there space for reconciliation and restoration within institutional power structures?” Weiseth says. “I don’t know. I want to say yes, because I feel like, especially as a Christian, we would hope that all things would be restored into wholeness, and that includes power structures and institutional influence and all of that. So I would hope that those things would be made whole.” “But I don’t know if we’re at a place, societally, that we can allow for that,” she continues. “I’m just not sure.”

“I do think that one of the most beautiful parts of the Christian faith is that it explains the cause of the evil that we see in the world, and it tells us that God is a God of justice, but then it also gives us this amazing pathway of redemption and reconciliation with God,” Harris says. “I think where Christians have gotten off track in different times is mixing those things together. Thinking that God’s forgiveness should somehow sidestep the consequences in the legal system, for example.”

This is the crux of the complication with forgiveness. At all times in history, there has been an understanding that wrongdoing required consequences. And while God’s grace might be offered freely, there is still real hurt that needs to be addressed in meaningful ways. Using God’s promise of forgiveness as an excuse to ignore those consequences is an abuse of grace. Learning to let go of that requirement has been key for Harris’ own evolution.

“I think especially in the Church, we’ve been so focused on being right, looking strong, keeping momentum. all those kinds of things, that the weakness that comes with admitting you’re wrong seems counterproductive,” he says. “But I think it’s actually the opposite. I think that weakness and a sense of vulnerability and even that sense of dying is a picture of what the Christian message has always been about.”

How to Actually Fight for Racial Reconciliation 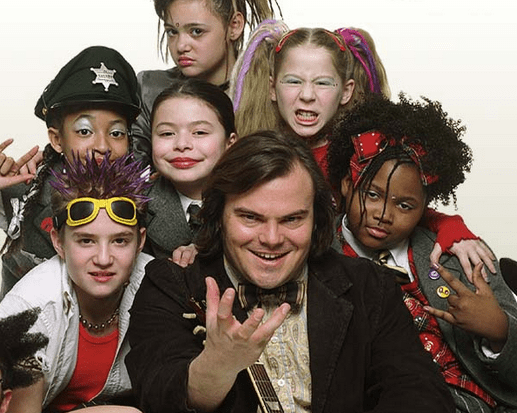 ‘School of Rock’ Is Coming to Broadway