As the protests against racial injustice have sprung up across the country and around the world, few issues seem to be closer to the forefront of Americans in 2020. The deaths of Black people like Ahmaud Arbery, George Floyd and Breonna Taylor fanned the flames of a movement that had been growing for the last few years and resulted in an unprecedented call for racial justice and equality, with more Americans than ever saying they are motivated to address racial inequality in their communities.

But according to one new study, one group is curiously immune to this sea change: practicing Christians. In fact, a new study from Barna found that among Christians who say they attend church at least once a month and highly prioritize faith in their own life, there is actually less interest in addressing racial justice than there was at this time last year. Quite a bit less.

30 percent of practicing Christians say they are either “unmotivated” or “not at all motivated” to address racial injustice in society. That’s almost twice as much as last year, when 17 percent said they were not motivated. “Christians generally, and practicing Christians in particular, have changed their minds on addressing racial injustice, but if anything, they’re actually moving away from being motivated,” said David Kinnaman, president of Barna Group, told Religion News Service. 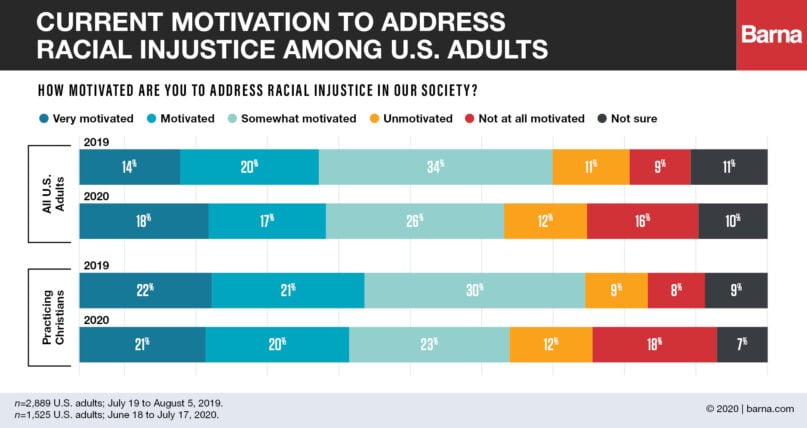 As you might expect, the numbers look quite a bit different if you’re just talking about Black Christians, 70 percent of whom said they were motivated or very motivated to address racial injustice this year — up from 63 percent last year.

You Should Read the LA Homeless Services Director’s Resignation Letter

The Afghanistan Hunger Crisis Is a Full Blown Catastrophe

No, the Biden Administration Is Not Spending $30 Million on ‘Crack Pipes’