Back in the good old days of junior high, I was positive I would have kids at some point in my life. But after years of watching my friends work at daycares, coo at little kids and gush about how great it would be to have children, I began to question that presumption.

Having children never really called to me in the same way that it did to them. I was even told by a sweet old lady I had come to know that if I didn’t really, really want kids, I shouldn’t have them. Fast forward to today as a college student in my twenties, and I am quite convinced motherhood is just not for me. Unfortunately, society does not respond so favorably to this.

I stumbled across a very insightful and well-articulated article in The New York Times called “Think Before You Breed” by Christine Overall. She highlights the paradox of society’s views on “childless” women by pointing out that when a young woman says she does not want kids, people immediately demand to know why not; yet when a woman says she does want to have children, no one questions her about why she does. It is simply the default.

But having kids is a much greater risk, Overall reasons, so shouldn’t the “burden of justification” be on the mothers-to-be? Society, it appears, views motherhood as just another chapter in the book of life that we must keep flipping through rather than the biggest ethical decision women will make in their lives.

This assumption of child-bearing as the default for all women is troubling because it allows them to bypass the critical question of why they truly want kids (terrible reasons do exist!) and not fully understanding the sacrifices they must make. Am I doing this to mend my broken marriage? Do I want someone to keep me company and take care of me when I get old? Am I looking to raise a genius so I can brag about him or her? (Kids are not therapists, retirement packages or trophies.) In fact, some of us don’t even pause to consider what a life without children could be like before hopping on the one-way train to motherhood, potentially leading to a resentful and broken relationship between mother and child.

This phenomenon is undoubtedly more pronounced in Christian circles, in which family (consisting of a mother, father and group of kids) is so highly focused. Many women who are married but childless by choice are scrutinized and judged. Church leaders like to point to a verse in Genesis 1:28 “Be fruitful and multiply and fill the earth” as a command from God to have children.

However, this is by no means an instruction to individual couples, but rather, to the population as a whole so the human species doesn’t die off. The same exact thing is said to the animals in Genesis 1:22. And we dedicated humans have already accomplished that—we have filled the earth to the tune of 7.1 billion people and one birth every 8 seconds (I am watching the world population clock ticking away as I write). Though children are regarded as blessings, such as in Psalms 127:3 which states, “Behold, children are a heritage from the Lord, the fruit of the womb a reward,” there is no direct command for women to bear children.

Simply put, motherhood is a gift. Some women have it, and some do not. As Paul writes, “There are varieties of gifts … but it is the same God who empowers them all in everyone. To each is given the manifestation of the Spirit for the common good” (1 Corinthians 12:4-7).

To those who respond to a woman’s decision to refrain from motherhood with an indignant “What?! But why not!?” or the off-putting “Just wait, you’ll change your mind in a year,” you may be right. Of course, God can always change our hearts and plans, but leave that up to Him, not others.

Women without adequate resources to nurture a child (keeping in mind that time and energy matter just as much as, if not more than, money) should take an honest look at what other gifts they may be blessed with. Those without children are freer to work missions abroad, have more time to volunteer in the community and can serve as stable, supportive figures to other children when the parents are overworked. Couples without children have an important role, both in and outside the Christian community. That often gets overlooked.

Speaking from a young woman’s perspective, I am not seeking to discourage other women from motherhood, but rather to help them see that the choice to have children is just that—a choice. It is neither a biblical command nor a societal requirement (no matter how much society wants it to be). Not every woman has to be a mother, and to force yourself into a role for which you are not meant can have lasting consequences on both you and your child. But when you accept the role God does intend for you—be that as a mother or not—the results can have a powerful impact for His Kingdom.

JaJa is an aspiring pharmacist, runner and health nut with a heart for the world. She currently resides in Coralville, Iowa. She has no cool blog to link to but will maybe start one someday. 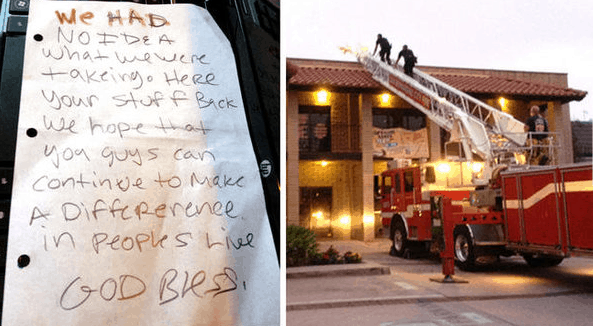 Burglars Return Computers After Realizing They Stole from a Non-Profit