Yes, it’s been one of those weeks. You know, the kind when everything that could go wrong goes wrong?

You overshoot your company’s budget due to accrued bills. An investor pulls out of another one of your projects. Three massive and unexpected medical bills were declined by insurance and hit within two days of one another. And all of it with a 8-month-pregnant wife on partial bed rest and a teething 2-year-old.

Anyone who signs up for life seems to have their own version of this story, because stuff inevitably hits the fan for every one of us. In fact, it’s a beautiful way that life seems to invite us into progressive self-development. But just because there may be purpose in the challenging times, it doesn’t mean we have to be victims of these episodes.

Here are three things to keep in mind when stuff hits the fan.

1. Stress is just the indicator

If you’re anything like me, your default instinct is to ignore stress. It’s as if we think our stress only becomes real if we acknowledge or talk about it. We ignore it and hope it eventually subsides … at least until the next fan episode.

Unfortunately, we don’t take into account that stress is a natural reaction our body produces as a result of a deeper cause. And when we make a habit of simply enduring or ignoring stress, its root cause never has to budge. It simply waits around for the next opportunity to manufacture stress and perpetuate our meltdowns.

If we were to explore what is causing us anxiety, we would find that often times it’s not the usual suspects. For example, a root cause of stress in my life currently isn’t the various bills compounding. It’s actually the irrational fear I have of losing everything. Having to dip into my savings account to pay these unexpected bills is simply stirring up that deeper fear.

In her fascinating book, Who Switched Off My Brain, Caroline Leaf talks about the severity of stress and the significance of uprooting its causes. “Stress Chemicals can be the kind of guests that don’t know when they have overstayed their welcome. If they stay, eventually they will tunnel deep inside the recesses of your mind, literally becoming a part of who you are.”

We often are quick to wage war on our circumstances, feeling as if we could pick up another client to increase next month’s income, then the stress will go away. And as true as this may be, the greater truth is that if we don’t deal with the root of our anxiety, we’ll not only postpone the cycle of stress for a later date, but we’ll begin architecting our decisions based on a fear of something rather than a love for something. This faulty architecture is far more destructive than momentary episodes of stress.

Consider, as a case study, a story I heard recently about a friend of a friend:

Around this time last year, John was taking more meetings with prospective clients than ever and booking less contracts. All the while, he was trying to ignore the stress created by a family to provide for, a withering savings account and consistent sleepless nights. Somewhere along the way, most likely after another failed client meeting, he realized his stress was causing him to put pressure on clients and at times, come across as desperate for their business. He determined to explore the deeper beliefs behind his propensity toward heightened stress.

It turns out that when John was a child, his father filed bankruptcy, sending their family in to an uncomfortable season of moving cities and eating microwave dinners. This fear of losing everything haunted John, creating exponential stress and in the end, repulsing his potential clients and hurting his income.

The liberating thought hit him: So what if we hit hard financial times? It’s not the end of the world and nothing we can’t survive. In fact, I never felt my family was closer knit than when rationing our lunch money and sharing clothes.

John dealt with the “why” behind the stress and because of it, hit the tipping point for his business. He no longer repulses clients or drains his inspiration with anxiety. He now does zero marketing and ends up turning down more clients than those he accepts.

I’ve heard it said that “If you want to know what you were meant to do in life, identify your greatest fear and do the opposite of what it tells you.”

When stuff hits the fan, we may not be thinking about what we want to be when we grow up. However, fear is still the enemy of everything good that today could be. Fear’s nature is to keep us stuck in a perpetual cycle of stress and low performance.

Let’s gamble against our stress and double or nothing on its hand. If it’s financial stuff hitting the fan, try being more generous than ever. If it feels like there’s not enough time in the day to manage everything, try taking a day off to rest and recharge. If it’s a co-worker consistently stirring things up, take them out to grab a beer, ask them about their life and make it your only goal to listen.

When stuff is hitting the fan, find out what’s truly behind the stress and simply act in one deliberate way that is in direct contradiction to it. Do something, as if to say to fear: I see you, I’m not afraid, and it’s time for you to leave. 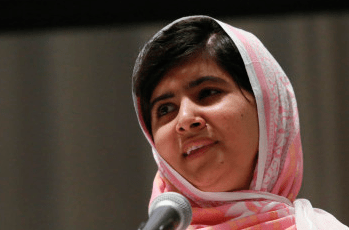 Taliban Leader Says He Regrets the Shooting of Teen Activist