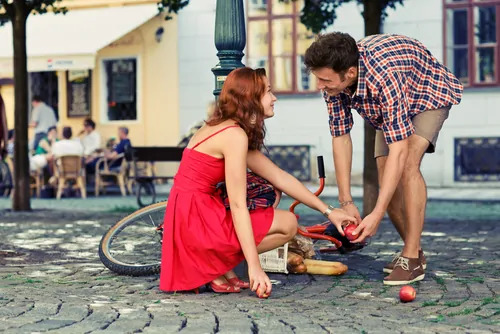 A recent poll I did on TrueLoveDates.com revealed that more than one-third of voters believed in “Love at First Sight.”

According to some of the people I’d spoken with, they knew they fell in love within a few moments of making eye contact. Their feelings were undeniable.

The heart-fluttering, brow-sweating, stomach-knotting emotions that were simply out of their control. There was chemistry, there was connection, there was immediate attraction. They were struck by love, and there was nothing they could do to get over it. So, how can one explain this instant connection other than saying that it’s pure love?

There’s a reality series on TV called Married at First Sight, and yes, it’s as crazy as it sounds.

The premise of this show is to “do away” with the concept of modern-day dating, offering six individuals a chance to be paired to their “perfect match” at the altar. Psychologists and sociologists work hard to evaluate the candidates with psychological testing, interviews and assessments in order to match them with their most compatible counter-part.

Eventually, the “experts” pair up two individuals and they meet for the first time on their wedding day. After they get married, they have six weeks to live together and make their marriage work before deciding whether or not they want to stay together, or get a divorce.

Essentially, it’s a modern-day arranged marriage (minus the option for divorce, of course), and it’s an interesting premise, which is why I decided to tune in when the show first came out.

But as the season unfolded, I couldn’t help but make some interesting observations about the three couples who participated.

What People Get Wrong About Love

For one thing, I observed that the couples who had the most “chemistry” at first sight were, ironically, the ones who ended up having the most unhealthy relationship and getting divorced in the end.

In the first episode, you watch them glance at each other and you can see the instant attraction flying off the television screen. One of the women described that initial moment as a “fairy tale” experience. In the past two seasons of the show, three out of four of the couples who had that instant experience of “love at first sight” ended up filing for a divorce only six short weeks after that moment. You know what that tells me? “Love at first sight” isn’t really love, is it?

The second observation I made was that any couple who is considering whether or not to get a divorce at the six-week mark can’t be a couple who is really after life-long love.

Because true love in any relationship is ONLY defined within the context of commitment.

So how can you talk about love, or even marriage, outside of that context? I have a hard time swallowing the idea of love at first sight, because by the very nature of the definition, it describes love as a feeling.

But here’s the thing you need to know about feelings: They can’t be trusted. They’re fickle and oftentimes even deceitful. Feelings come, and just as fast, feelings go. One minute you can feel defeated by sadness, and then in a blink of an eye, happiness follows. Confusion turns to assurance. Excitement into fear. I fully believe that feelings should influence us, but they should never lead the way.

To believe in love at first sight is essentially to let emotions take the reins, which ultimately causes confusion more than it makes a way for romance. Healthy relationships are based on so much more than feelings.

On the other hand, feelings shouldn’t be repressed or ignored. They are meaningful, when kept in proper perspective. They have an important place in our lives and can be a powerful influence in the choices we make.

You know what’s interesting? My husband, John, describes his first encounter with me as an instant attraction. He says he walked into the room and was “overwhelmingly struck” by my beauty. He says he couldn’t take his eyes off of me. Something inexplicable drew him to me. But though his emotions were a first step toward getting to know me, they were not love in and of themselves.

Because love is defined by what a person does, rather than simply by how they feel.

The greatest definition of love ever written is found in the pages of the Bible. The Bible reveals love as a choice that is based not entirely on feeling, but on the commitment of one person to another. Love is giving of self with no expectation to receive- a decision made every moment of every day. It’s unconditional.

“Love is patient, love is kind. It does not envy, it does not boast, it is not proud. It does not dishonor others, it is not self-seeking, it is not easily angered, it keeps no record of wrongs. It does not delight in evil, but rejoices with the truth. It always protects, always trusts, always hopes, always perseveres. Love never fails” (1 Corinthians 13:4-8).

According to this, true love is a series of actions and a pattern of choices. But what’s even more amazing is that this definition comes from a God who took it upon himself to show us what choosing love means. He gave complete love by pursuing it as an action–to the point of sacrificing his life.

Love at first sight is never complete love, because it’s based on emotion rather than commitment; a feeling, rather than a choice. It can’t accurately represent love because it’s only the beginning. True love is born when two people commit to offer themselves for the sake of the other person. It’s a process of growth that deepens a couple’s bond over time.

That’s exactly what happened with me and John. The instant attraction slowly grew into something more meaningful. We chose to connect, to give, to serve and to honor one another in the friendship and relationship that formed thereafter. We watered the seed of love by our choices. Attraction may have opened the door—but action kept it open. And love was born. True Love. Real love. Lasting love.

Because stronger than love at first sight, is choosing love thereafter. Every. Single. Day.

This article was originally featured on TrueLoveDates.com. Used with permission.

The Number of Christian Refugees Allowed Into the U.S. Has Fallen by 43%