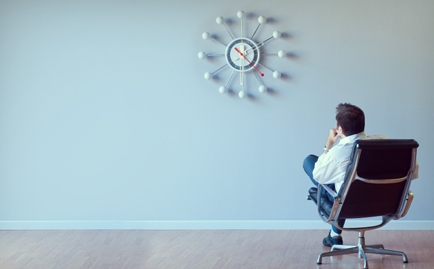 There are two things I am better at than you.

The first is taking off my shoes at airport security. I don’t care if you wear flip-flops and fly without a single thread of luggage, I am beating you at this game.

The other thing I’m better at than you? Quitting jobs.

I held eight jobs in eight years from 1998 when I graduated from college until 2006. These weren’t petty, part-time jobs, like the time I was a mailman or that afternoon I spent as a carny.

The jobs I quit were 40-hour a week, 401K offering, health care transferring, me-in-a-plain-colored-cubicle jobs. These were career jobs for most of my coworkers, and in a period of eight years I managed to quit six of the eight. Another I was fired from and the other went out of business.

I used to think I was unique, that perhaps I had a problem with staying at one job for a long time. It turns out I am extremely common. A recent poll revealed that 84 percent of workers plan to look for a new job this year. Furthermore, the average tenure at a job is dramatically changing from generation to generation. A U.S. Department of Labor study revealed that the median tenure for the 55- to 64-year-old category is 10 years. For the 25- to 34-year-old category, the average tenure is only 3.1 years. You and I will quit lots and lots of jobs.

We used to stay at jobs for decades. We got a gold watch for staying at a job for 30 years and then we retired to some flat, sweaty part of Florida to eat dinner at 4:30 in the afternoon. But somewhere along the way that changed.

The golden watch has become the other end of golden handcuffs. We now look at steady jobs as less of a goal and more of a necessary evil. They aren’t fun; they simply fund our lives.

We buy into the lie that work is usually miserable.

We buy into the lie that it’s possible to separate who we are at work from who we are outside of work.

We buy into the lie that to escape the drudgery, to be the person we want to be all week long, to follow our dream, the first step is to quit our jobs.

Despite the fact that quitting your job is the new American dream, it’s usually the worst thing you can do right now. Here’s why.

Donnie was the worst boss I ever had. He was my boss for about a year and during that time I was miserable. I wanted to quit so badly. I longed to be free and away from him. I thought if I quit my job I wouldn’t have to deal with such a horrible boss.

The unfortunate truth is the land of no Donnies is just a fantasyland. The second you quit your bad boss, you get dozens of new bosses. And some are more demanding than the Donnie you just left.

All the responsibilities that were quietly and almost magically covered when you had a steady job suddenly become your new and more demanding Donnies. The wonderland of freedom feels more like wanderlust. Now you have a new set of worries. Now you’ve created dozens of tiny leaks in your lifeboat.

And inanimate objects like bills are not the only new bosses you’ll acquire. Want to throw an easy relationship into chaos? Quit your job.

The wife who never worried about money will have fiscal panic attacks. The husband who didn’t tally how you spent your time will become an ever-present punchclock. Even the most easygoing person on the planet starts sweating when you play around with things like the mortgage. All in the name of your dream. Your dream? How do dreams pay the bills? Should you just dial up your providers and see if dreams are an acceptable form of payment? Is there a secret, free food section you have access to when you’re married to a “dreamer”? As it turns out, no.

This is a lose-lose-lose situation.

I want you to drop the q-bomb on your Donnie, I do. Just not yet. And not under the belief that doing so will usher you into a gloriously bossless nirvana. There is a wiser way to chase your dream and it begins by keeping your current job.

But if you have a job—even a less-than-ideal one—you get to say a pretty vital word.

You effectively lose that option when you quit. You lose that freedom when you jump without a net. You lose the power of the walkout or the shredded contract. Because you need this embarrassing gig.

To chase your dream well, you must fight to hold on to this small but significant word. Saying no is one of your most important resources, especially in the beginning. And the simplest and safest way to keep your no’s is to keep your day job.

It is very possible you’ve actually thought long and hard about quitting your job. You’re in the minority of folks who have saved up money for a famine year. The threat of a dozen new Donnies doesn’t worry you, at least not right away.

If you quit now, there is still another landmine looming you’ve probably not considered: remaining dangerous.

At the heart of a dream is change. Few like this. People get comfortable and often see dreamers as threats. We might be a culture that wants to quit our jobs, but deep down, change still scares a lot of us, especially when it threatens the norms we’ve come to embrace. But if you’re going to chase your dream, guess what? You will be dangerous. You’re going to threaten the status quo and that’s not for the faint-hearted.

There will be a long list of people who ask you to play it safe.

At every corner, with every new opportunity, will come a temptation to soften or dilute your dream. Other people will try to smooth out the edges for you. Outsiders will lob bricks. Decisions will force you to consider compromising your core idea and belief. Friends will tell you to change something, to remove part of whatever it is you’re doing that’s threatening because it’s just not comfortable. "Be careful," they’ll say.

And if you don’t have your job, guess what? You will have to pacify them most of the time. You will have to choose the safer but less rewarding route. Want to stay dangerous with your dream? Want to make some real progress?

Don’t quit your job. Not yet.

Jon Acuff is the author of the book and blog Stuff Christians Like. This article is an adapted excerpt from his new book, Quitter, which comes out tomorrow. You can find out more about the book here and order it here. This article is reprinted by permission. All rights are reserved.

The Cost Of Environmental Neglect