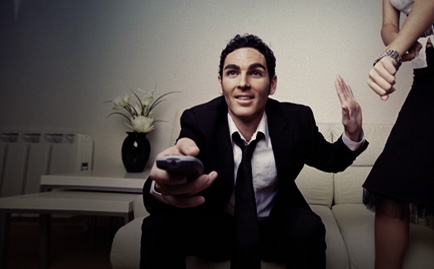 "Grow up!” How many times have you heard the demand thrown out with vitriol, shot out of the mouth like a bullet? From childhood, we are conditioned to believe that “growing up” is worthy goal—but in reality, we’re often a generation of Peter Pans stuck in a perpetual adolescence, saying “Who wants to grow up and get old?”

We are stuck in flux. We are told to explore, to create and imagine, to find the perfect job and perfect spouse … but also that settling down is lame and for old people. Yet, there is a longing to be grown-up and be movers and shakers, not just people with ideas that can change the world but people who have the power to change the world.

Our stage of life is a unique one. According to a Yale study, two thirds of all lifetime job changes happen in the first 10 years of a working career. We are marrying later than our parents (the Census Bureau says the average age for men is 28 and 25 for women), our jobs are less stable and federal studies demonstrate that the traditional four years to graduate is no longer accurate. The old rites-of-passage are disappearing and nothing has replaced them so we are left with the question, what does it mean to grow up?

The phrase has been thrown around in so many ambiguous ways that the meaning is confused. Growing up has to be more than simply a career and marriage; there are far too many people who fulfill both of those requirements and still have the maturity of 8-year-old Max in Where the Wild Things Are.

Gina DeLapa, director of Real-World Etiquette and adjunct instructor in the University of San Diego graduate counseling program, puts it this way: “Being grown up means taking full responsibility for your life—your decisions, their consequences, how they affect other people, all of that. Being accountable. I think it means being able to support yourself and yes, able to hold down steady employment. But even more than that, I think it means being able to rise to the challenges of reality; willing to grow and even seeking it out.”

All these descriptions smell like one thing we often tried to ignore when we were kids: responsibility. When you’re young, other people are responsible for your financial well-being (even if you didn’t get an allowance, chances are you didn’t pay rent to live at home) and though your friendships were important, you hadn’t entered into state-recognized, God-sanctified contracts with them. Kids are responsible for their actions (or should be), but the commitment level is low.

“Young people feel like commitment means they are getting old,” says Brett McKay, creator of TheArtofManliness.com. “That’s what grown-ups do; they get married, get a mortgage and have kids. When you are a kid, the world’s your oyster, you have all these options. To keep options open, they keep putting things off, which end up delaying growing up.”

So does being grown-up and the respect that comes with that simply mean to lose options and live a boring life? Our generation has been told through advertising that life is meant to be “exciting” and that exciting is not sitting at home; exciting is crazy adventure, wild parties, making money, vacations, all of which are focused on the individual and little on giving back, on responsibility. Is it any wonder that we have a hard time making a cultural shift to being “grown up?”

“I think the 20’s are an extended adolescence,” says McKay. “I don’t think you should get married as soon as you’re 19,  but if you are still living like you’re 18 and you’re in your 30’s, there’s something wrong. When you feel restless, like you need something more, that’s a good indicator that you need to take on some responsibility. The sad thing is, sometimes when people want to, for example, start a family, it is too late.”

We were meant to live for something bigger than ourselves. From the start, the first people were given the task to care for creation, to be fruitful and multiply. These are responsibilities that far superseded their limited spheres of personal happiness. This isn’t to say that personal satisfaction isn’t important; it is to say that in living for something larger, taking responsibility, we are doing what we were created for and will find true fulfillment.

So what keeps us from reaching this mythical level of getting to sit at the grown-up table? The idea of a career is changing, college education is becoming more the norm than the exception and sometimes, financially, we have dug such a hole that we are unable to take responsibilities without help from others. It is not a bad thing to need help (we all do in some way or another), but this can be a big barrier.

Why We Need to Get Rid of ‘Hustle Culture’

“No employer goes, ‘Ooh, he’s got a college degree’ any more than they say, ‘Ooh, he knows Microsoft Office,’” DeLapa comments. “So people are working harder to get through school, and when the finish, they’re deep in debt and then they may find out the degree isn’t enough. It’s hard to feel grown up when you’re living with your parents—or working the same retail job you had when you were in school.”

The solution is not simply “work hard enough to get a good job, get married, have kids and climb the ladder of success.” It’s more of a mindset, decisions that need to be made and followed through on. Like the decision to start taking responsibility for your own life. And start considering yourself grown-up.

Not everyone will recognize you as an adult, as “grown-up,” initially. In a generation that often struggles with entitlement, it will take hard work before others recognize growth and maturity. If we were coddled and protected as a kid, it may take some searching to truly find out who we are as adults. It may take time and that’s okay. In fact, as DeLapa notes, there really is no point where you “have arrived.”

“The term ‘grown-up’ almost implies the clay is dry, that we’ve stopped growing, which I think is scary and all too prevalent,” she says. “How many people graduate from college and never read another book? Or never expand their worldview, or deepen their faith life? Being ‘grown up’ means you’re always willing to grow and even seeking it out—hopefully as long as you live. It implies a willingness to question things, but in an honest, searching way—not in a snotty, defiant way. ‘Help me understand …’ is a whole different ballgame from ‘How come?’ or worse, just taking your ball and going home.”

There is no point of arrival, no graduation where we can flip the tassle, toss our caps and say, “We’re done!” There’s no one moment of finality; instead, there’s a process where we learn to accept responsibility, embrace commitment and begin to think of ourselves as adults instead of kids. In other words: slowly and painfully, we grow up.

How to Disciple on a Tight Schedule