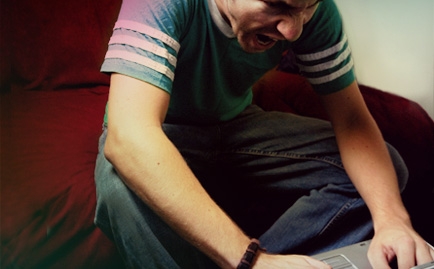 When RELEVANT asked me to write this article, I originally wanted to title it, “How to Be a Jerk on the Internet.” I felt like that article would be easier for me to write because I’ve got much more experience at being a jerk than I have at not being one—ask people who went to college with me. They’ll tell you. I was a jerk online before online even existed. (That last sentence was like Inception; I was a jerk within a jerk within a jerk.)

But in the last three years of writing the blog StuffChristiansLike.net, I’ve learned how not to be a jerk online. It hasn’t been easy. I’ve made a lot of mistakes, but along the way I’ve picked up some tips that I think might just help us all. The following are five ways to not be a jerk online:

Someone you’re following tweets one too many poems about their cat. You’ve had it up to here with feline haikus. I get it. I do. I don’t like cat poetry either. I don’t even think cats like it, but there’s no reason to ever publicly announce you are unfollowing someone. This is the middle finger of Twitter. The person who you are unfollowing gets punched in the face and you look far more spiteful than you really intend.

Don’t argue with someone anonymously.

I once heard a pastor say that “hate mail that’s signed by nobody is worth nothing.” He’s right. If you’ve got a strong opinion about something someone else did or said or wrote online, don’t be a coward. Don’t hide behind an anonymous account on comment boards or social networks. If the opinion matters enough for you to share it, then share it publicly with your name on it. Otherwise, don’t say it.

Don’t be someone else online.

Sometimes, lives are wrecked by “Business Traveler Mentality.” This is the belief that “the rules of home don’t apply when I’m on business trips.” People make really horrible decisions on the road they’d never make at home because, “What happens in Vegas, stays in Vegas.”

Often, we Christians suffer from that same line of thinking when we get online. We’ll tweet things we’d never say to someone’s face. We’ll comment on Facebook statuses in ways we’d never do in “real life.” We’ll push buttons and pick fights on comment threads and message boards. We’ll gossip and tear down people as if maybe “Love your neighbor” actually says, “Love your neighbor, except if you’re online.” The greatest way to become a jerk online is to become someone else. Don’t. Avoid the temptation to create an “offline you” and an “online you.”

I’ve written over a million words on StuffChristiansLike.net and a book called Stuff Christians Like. I’ve written a ton on JonAcuff.com too. And only one phrase I’ve created has ever gone viral—"Jesus Juke."

What’s that? A Jesus Juke is an idea I came up with to describe the moment when you’re having a normal conversation and someone jukes in some Jesus out of nowhere. For example, I once tweeted that I was at the Conan O’Brien live tour and it was sold out. Someone responded, “If we held a concert for Jesus and gave away free tickets, no one would come.” Sad trumpet, whaaa, waaaa. A Jesus Juke is the Christian version of the Debbie Downer moment.

Another example is from the Super Bowl. If on Super Bowl Sunday your Facebook status was, “I’m so excited about the big game,” I promise you that at least one of your friends responded, “Don’t you wish we were all this excited about church on Sunday?” That’s a Jesus Juke—and they do more damage than good. Friends don’t let friends juke.

You know what no one has ever said in the history of mankind? “Remember that time you viciously mocked and made fun of other Christians? That helped me start a lifelong relationship with Christ. Thank you for using the spiritual gift of mockery in the service of the Kingdom.”

But even knowing that, I have personally blown this one approximately 96 times, especially when I first started writing Stuff Christians Like. I didn’t understand the difference between mockery and satire. I thought they were the same things. They’re not.

Satire is humor with a purpose and my purpose is to share the name of Christ. Satire is a vehicle for truth. Mockery is a vehicle for wounds. Mockery always has a victim. The tempting thing is that mockery is fun and easy. It’s such a great shortcut to a laugh. Mockery gives you an easy laugh right now but removes your ability to speak in love later. And the love later matters more than the laugh right now.

Perhaps the best reason not to mock is that God despises it like I despise algebra. The book of Proverbs is jam-packed with verses that detail how toxic mockery is. Perhaps the scariest is Proverbs 9:12: “If you are wise, your wisdom will reward you; if you are a mocker, you alone will suffer.”

Those are five things I wrestle with on a daily basis. Some of them are easy to do, like committing to never publicly unfollow someone on Twitter. Some are fuzzier, like trying to figure out the exact line between mockery and satire. But hopefully, next time you’re tempted to be a jerk online you’ll remember this post. Hopefully you’ll tweet kind, blog kind and Facebook kind. The Internet is full of jerks right now. Anyone can be a jerk. You want to stand out and be original and represent a faith that we claim is built on grace?

Don’t be a jerk online.

Jon Acuff is the Wall Street Journal best-selling author of three books, including Quitter; Gazelles, Baby Steps And 37 Other Things Dave Ramsey Taught Me About Debt; and Stuff Christians Like. He’s a member of the Dave Ramsey team and lives in Nashville, TN, with his wife and two daughters. Read his blog at JonAcuff.com and follow him at twitter.com/jonacuff.