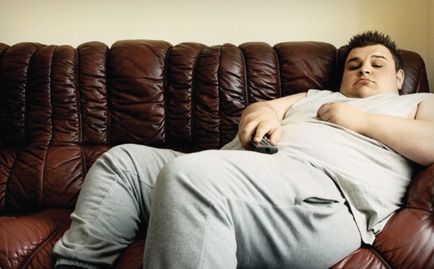 If you stop by at just about any VBS event in the country, you’re likely to find pizza, chips or soda (maybe all three) being consumed by a 9-year-old. Grab a plate at many congregational fellowships in America, and chances are it’s loaded with unhealthy grub. Check any popular buffet in your town on Sunday afternoon, and you’re likely to find it’s packed with churchgoers.

Most Christian churches take pride in supporting the weak and afflicted. Well, this generation of youth is the first expected to live shorter lives than its parents.

According to the White House, nearly one in three children is overweight or obese. That’s more than 24 million kids. It is estimated that kids between the ages of 6 and 14 eat fast food 157 million times every month. Many of them will eventually suffer from diabetes, heart disease, kidney problems, high blood pressure, high cholesterol, orthopedic problems or sleep disturbances—and likely self-esteem issues.

In response to these unhealthy trends, First Lady Michelle Obama started the Let’s Move initiative to get kids active and eating healthier. Jamie Oliver spent a season of his Food Revolution show pleading for L.A. schools to produce healthier menus. But what is the church community doing to help the childhood obesity epidemic?

Maybe you have issues with the Body Mass Index (BMI) system, or perhaps you are wary  a discussion on weight could promote unhealthy standards of thinness. But whatever your concerns, you can’t deny childhood obesity is a problem. For the Church, the answer is probably not a fitness ministry or a series of sermons on how McDonald’s is of the devil. But churches don’t have to step outside of their general purpose to help; in fact, healthy living fits into the Church’s mission quite nicely.

“However we address it, we can’t really do it from the perspective of making [people] feel bad about themselves,” says Steve Martin, minister at Tri-Valley Church of Christ in Livermore, Calif. “You’ve got to convey the sense that God really loves you, you are an amazing person.”

Back in 2000, each state in the union was below 25 percent obese. The CDC reports that last year, 36 states were at least 25 percent obese, with 12 of them at 30 percent or greater. And according to the Arkansas Center for Health Improvement, the risk of a child becoming obese doubles when his or her parents are obese. Obviously, adult influence factors in heavily.

Maybe step one for churches in helping curb childhood obesity is setting a better example.

What message would it send to youth if they were given fruit before worship instead of donuts? If salads were part of the meal at youth events? If helpings at church functions weren’t so gluttonous?

In the 1980s, according to the Let’s Move initiative, children had an average of one snack per day; now, 20 percent of school-age children have up to six snacks per day. Safe to say they aren’t munching on edamame.

“It’s not like we have to only serve health food,” Martin says. “But what are we really serving? Are we monitoring what kids are given? Can we really expect kids to have the spiritual maturity to be self-disciplined on this? To not want fast food?”

The answer lies in our approach. The obesity battle isn’t an individual responsibility; it’s a community effort. Research on this topic attributes childhood obesity, at least in part, to the decline of the family dinner.

As the First Lady’s Let’s Move initiative claims, 30 years ago meals were cooked at home with reasonable portion sizes and included a vegetable. Now, the family meal is Taco Bell out of paper bags on the way home. As a result, Americans are eating 31 percent more calories than 40 years ago.

By just encouraging regular family dinner, it seems churches would be helping fight childhood obesity. In addition, the spiritual benefits of sharing a meal are undeniable.

“The Christian church from the beginning would break bread in their homes,” Martin says. “Food is a good context. That, to me, is what generates the idea of the family meal. Not so much that we’re going to overeat. But because we have to stop and eat, and food is a reminder of our daily dependence on God, it is a good time to slow down. Gather as a family, be grateful for it and talk a little bit. With work schedules, that can be next to impossible. … But I think that’s worth fighting for.”

Scripture’s teaching certainly addresses how people should regard their body. The Bible reminds Christians their bodies belong to God because they were bought with a price (1 Corinthians 6:19-20). And that those bodies are to be living sacrifices (Romans 12:1).

People know they aren’t supposed to steal, or have premarital sex or slap people they don’t like. But do they understand their body is a marvelous blessing they’ve been entrusted to manage? Do they grasp their service to God can be maximized by healthy, functioning “temples”? Such a perspective provokes a better examination of what is consumed.

Churches have been known to educate people about financial management, political issues and job opportunities. Some youth ministries offer tutoring and help teens in the college process. So it wouldn’t be ungodly to make them aware of bad eating habits, of health risks they face or even to encourage exercise. There’s nothing wrong with holding a movie night and showing Food, Inc.

“The faith-based community is uniquely positioned … because of its concern and investment in not only the spiritual well-being of its congregation but the mental and physical health as well,” says Taco Williams, the health policy advisor for the Delta Regional Authority, which is charged with enhancing economic development and quality of life for eight states along the Mississippi River. “Churches are often seen as a trusted source for factual and helpful information. That creates an opportunity to educate and promote healthy lifestyle choices across a multi-generational spectrum, which ultimately improves the health of children across the country.”

It’s clear that an awareness of our bodies and how we treat them didn’t start with a White House campaign. It started when God turned dust into flesh and called it a man; it started when He knit each of us together, fearfully and wonderfully. Our bodies were made with care—why should they be maintained any differently?

Marcus Thompson directs the youth and young adult ministries at the San Pablo Avenue Church of Christ in Oakland, Ca.

Does your church community address healthy living? Do you think they should, and how so?

Bombings in Iraq Kill More than 50