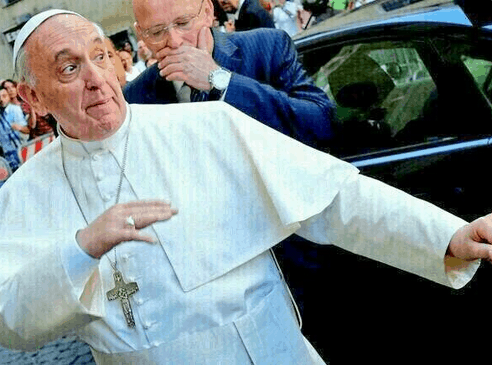 It’s the Onion’s world, and we’re just living in it, apparently. Today, amid a historic U.S. tour, where he’s been hanging out with the poor, and connecting with unbelievers, Pope Francis notched up his cool factor even further by announcing he’s releasing an album. Of actual music.

If you heard a record scratch to a halt upon reading that, rest assured you’re not alone.

But this is no drill. The Vatican approved LP features cuts from the Pontiff’s most moving speeches in several languages and what the press release calls “uplifting musical accompaniment ranging from pop-rock to Gregorian chant.”

Curious? (And why wouldn’t you be?) Check out his lead single “Wake Up! Go Forward!” over at Rolling Stone. We’ll be blessed with the full album on Nov. 27 via Believe Digital.