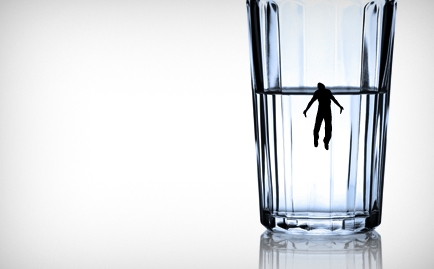 Pretend you’re a good, hard-working employee, and upon arriving at work on Monday, you encounter your boss in the hallway. "Good morning," Mr. Bossman says. "I need to talk to you about something. Come by my office after you get settled in."

What’s your first thought? A pessimist will automatically turn apprehensive, back-scanning the last few days to figure out what he might have done wrong. To the pessimist, everything is his fault. When something bad occurs—even something ambiguously bad, like a vague statement from a supervisor—he assumes the worst. He broods. His energy decreases. Taken to the extreme, his health may suffer, and he may eventually become clinically depressed.

As for the optimist, her thought process after the Bossman encounter swings an entirely different direction: He wants to tell me how good a job I did on the Daniels account, our optimist may think. He’s going to promote me. Maybe I’ll get a raise. The optimist doesn’t automatically jump to the worst-case scenario, but assumes a more positive outcome. And when actual obstacles do arise, they’re not such a big deal. Those challenges are simply extra hurdles in the race. The optimist may be surprised by the hurdle and stumble a little, but she picks herself up and starts running again.

The line between optimism and pessimism is fuzzy. Few of us are entirely one or the other: There are hardly any true Pollyannas in the world, just as there are few who can out-Ebenezer Scrooge. Most of us fall somewhere in between, and our response to a difficult situation can fluctuate from one side to the other depending on the week, the season of the year, the way we feel physically and even how we started our day. You knew this was coming, but here’s a tip as you roll toward adulthood: Optimism is better than pessimism.

"Hang on there, Captain Obvious," you’re saying. "You can’t just suddenly fake yourself into an optimist. Some people are wired to think that way, right?"

Right. Some people do have naturally optimistic or pessimistic tendencies, though most of us are more inclined toward the negative. In fact, we might as well consider low-frequency pessimism to be normal. But that doesn’t mean we can’t escape it. Pessimism doesn’t have to be permanent. You can get rid of it piece by piece, like stripping bark from a tree. It’s a slow process, but it’s necessary for a well-lived life.

Laying the smackdown on pessimism

In the 1991 bestseller Learned Optimism, psychologist and clinician Martin E.P. Seligman details the roles optimism and pessimism play in regard to quality of life. He believes who we are—and what we become—are deeply related to how we explain life’s stumbling blocks to ourselves. He writes: "The defining characteristic of pessimists is that they tend to believe bad events will last a long time, will undermine everything they do, and are their own limit. The optimists, who are confronted with the same hard knocks of this world … tend to believe defeat is just a temporary setback." Optimists see a bad situation as a challenge, so they try harder.

The most efficient way to move from pessimism to optimism is through what Seligman calls "explanatory style”—protecting yourself against failure or crisis by interpreting it in the most positive light. In our introductory example, the boss’s comment elicited different explanations in the pessimist and optimist—both of whom, we’re assuming, are valued employees. The pessimist begins allowing one unpleasant scenario after another—being fired, failing at a project, even being caught at marginally forbidden behavior—to careen through his mind as an attempt to clarify the vague "meet me in my office" comment. His explanatory style is fueled by negative emotions like fear, failure and guilt.

Meanwhile, the optimist is driving a different truck, one ruled by self-confidence and hopefulness. She expects the best and doesn’t allow herself to attach negative fallout to a neutral statement. If anything’s out of the ordinary, she tells herself, it’s the good kind of extraordinary—and she fully expects to benefit from it.

Let’s take another scenario: an unsuccessful date. This situation has a known outcome—failure. You meet someone new and you go out, but for a variety of reasons, the two of you just don’t connect. Both of you look great and perform admirably, but in the end, you both go home knowing it won’t work out.

How you explain that failure to yourself says a lot about your personal outlook on life. The optimist will find positive reasons for the rejection. He didn’t seem comfortable with me, she’ll think. He’s not ready for a relationship right now. Or maybe he’s just more compatible with a different personality type. She could even take it a step further: Perhaps I intimidated him. I was simply too smart, too charming. He’s just too stupid to know how great I am. Anyway, we didn’t click, but that’s because of him, not me.

The pessimist, however, internalizes the rejection. She didn’t seem comfortable with me, he’ll think. Then he mentally dropkicks himself, blaming her discomfort on something he did "wrong.” Maybe he had bad breath. He must have been a dull conversationalist. His appearance was below-average. Whatever the reason, it was his fault.

In explaining the unsuccessful date to herself, the optimist refuses to accept a negative rationale. When one comes up mentally, she argues against it. Not so for the pessimist. He fails to dispute his internal dialogue, allows a drumbeat analysis of the date to run its course and ends up attributing the bad experience to his own shortcomings. When the date ends, each of them runs into a wall—"he/she didn’t seem comfortable with me"—but approaches it differently. The pessimist sees the wall, recognizes it (he’s been here before) and just stops. Turns around and goes home. Race over. The optimist pauses momentarily at the wall, then starts climbing. Thinking of constructive reasons why the date didn’t go well, she eventually reaches the top, drops to the other side and starts moving again. She’ll run a good race.

The trick is to anticipate the negative explanations and turn from them when they arrive. How? Gather evidence against your self-defeating thoughts. When "it’s my fault" starts to emerge after the date, shut it out by remembering the people who do like you, who find you interesting, who enjoy being around you. Then, come up with different explanations for the failure (i.e., "She’s so not ready for a relationship right now") and start arguing with the bad thoughts. Distract yourself from them.

There are plenty of reasons to strive for an optimistic, worry-protected life. For one thing, you’re more fun to be around—we’d all rather hang out with Tigger than Eeyore. Secondly, it’s healthier. Research suggests optimists live longer. You’ll have fewer physical and emotional problems, higher pain tolerance, increased energy and a lower risk of premature death. So lighten up.

This article originally appeared in The Pocket Guide to Adulthood (RELEVANT Books). Jason Boyett is a blogger and the author of O Me of Little Faith (Zondervan).

A Deeper Look at Fasting