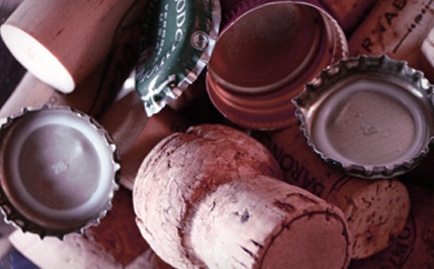 Whether shunned, embraced or abused, alcohol has held a controversial place in the Church for ages. And surely there is nothing so truly deadly as a writer you’ve never met trying to make you aware of alcohol. But the only things I have going for me—the only things we have going for us—are these two crazy stories from the pages of Scripture. Two stories that give us two very different pictures of what alcohol means for people who want to be biblical people, who want to follow this story all the way to its surprise ending.

Noah, a man of the soil, plants a vineyard. A natural thing to do—a cultural thing to do. Fresh from the Flood, Noah is doing what Adam had done—creating culture, tending God’s world. He sets to work after the devastation of the Flood and recreates a little Eden, with well-tended vines and big round grapes. This is all good. In fact, it’s an advance from what Adam, the original gardener, had done—not just cultivation but fermentation. Noah has taken gardening to the next level, the level where the invisible yeastie beasties become part of the process and something rich and tasty and effervescent emerges. All that is very good. Noah takes a deep drink, and the first taste is good. Then he takes another, and another.

Before he knows it Noah is passed out, unconscious, naked on his bed. His son comes in—by accident or on purpose we don’t know—and further contributes to his father’s shame. The other brothers try to undo the damage. An entire family is caught in the mess of one man’s drunkenness, relationships fractured, curses hurled back and forth, some playing the role of the good child, others the bad child. The abuse of alcohol brings shame on everyone involved. Not for the last time.

Noah was stranded outside the best story. Noah’s drinking binge is part of a grim downward spiral in the early chapters of Genesis, from a fruit tree to a brick tower. As the Fall works out its inexorable logic, knowledge becomes forgetfulness. Adam and Eve sought to know good and evil; they ended up forgetting how to do good and resist evil. The other sense of knowing, that wonderful biblical word for sexual union, turns to forgetting as well. When Noah’s son Ham sees his father sprawled and naked, in one sense he “knows” Noah better—but Ham’s brothers understand this kind of knowledge is fruitless. It would be better not to know. After the Fall, to be naked, to be truly known, is to be ashamed.

Yet there is another story we also read today. This story takes place at a wedding. And here too there is a threat of shame in the air—not the shame of having too much wine, but the shame of not having enough. Jesus steps in, at His mother’s insistence, to prevent this shame. Amazingly, Jesus does not seem concerned with moderation in this story. We get the idea that the party is well underway—if the guests are not three sheets to the wind, they are at least far enough along that they might not notice if the Chateau Lafitte is switched out for some Barefoot Chardonnay or Two-Buck Chuck. And Jesus provides more wine—lots more wine, not in 750 ml bottles, but using the huge jars that normally held dozens of gallons for the rite of purification.

Jesus has come to undo everything that the Fall did. His wine bursts even from water jars. These water jars, of course, were there for the purification rites that allowed women to escape the shame of their monthly bleeding. This was water that took away shame and separation. But now the water of purification is poured out and made wine for every guest, male and female. And this wine does not bring shame. It covers shame. It purifies. So different from the wine that leaves Noah lonely and naked, this wine sanctifies the one-flesh togetherness of a man and a woman who need no longer be ashamed.

We may know our family story well enough to know that alcohol, in this fallen world, is very likely to master us in the way it mastered Noah. Or we may find ourselves in a culture where alcohol has become so intertwined with shame that for a Christian to consume it would be to bear false witness. That is true right now in many parts of Africa, where our Christian brothers and sisters have seen the evil that the colonizers’ alcohol brought with them; it may well be true in Russia, with its devastating national history of alcoholism; and I suspect it’s true at some football games.

Whether we abstain for our whole life or just in certain contexts, there is good news for us. We know the Jesus who turned water into wine. Jesus is the life of the party. He does not require wine to get a party going. He can work with anything. He does work with anything, or anyone. He will make us effervescent, bubbling over with life, a sign of the best news for the world, without a bit of fermentation required.

On the other hand, we may well discern that in the place and time where God has put us, fermentation is a gift we can receive. If so, there is good news for us there, too. Jesus heightens our senses. He makes us alert to everything that is most real in the world, and dulls our taste for everything that is false. So we will never need to drink too much. One beer will last us a long time, because we will be tasting it, savoring it, noticing it, knowing it—not just drinking it. If we have any sense we’ll save our precious discretionary dollars for what is best—the best beer, the best wine, the best whiskey, so we will not drink often but we will drink well. We will drink from glasses that bear witness to culture at its best, to the long history of grapes and barley and wheat, to the lingering taste of soil and water and barrels and air. Jesus is the life of the party. He saves the best wine for last. Why would we get drunk, get to the point where we can’t recognize the best wine when it arrives? The best wine will be better than anything we’ve ever tasted—the wine that celebrates a marriage, the feast of union between all that had been torn apart.

At the bottom of it all, I think human beings drink because we want to be known, and because we are afraid of being known. We drink because we want to know, and because we are afraid to know. But perfect love casts out fear. Be assured, at the great marriage supper of the Lamb, all the best of culture will be poured out to be fully tasted and fully enjoyed. It will be fully enjoyable because it will be fully part of the best story ever told. When Jesus’ glory is revealed, we will say, “You saved the best wine for last.” And then we will all enter into the feast where we will know, just as we are known: We will eat the food and drink the wine that makes us whole, and well, and unashamed

At Least He Didn’t Just Say “Hit Me”