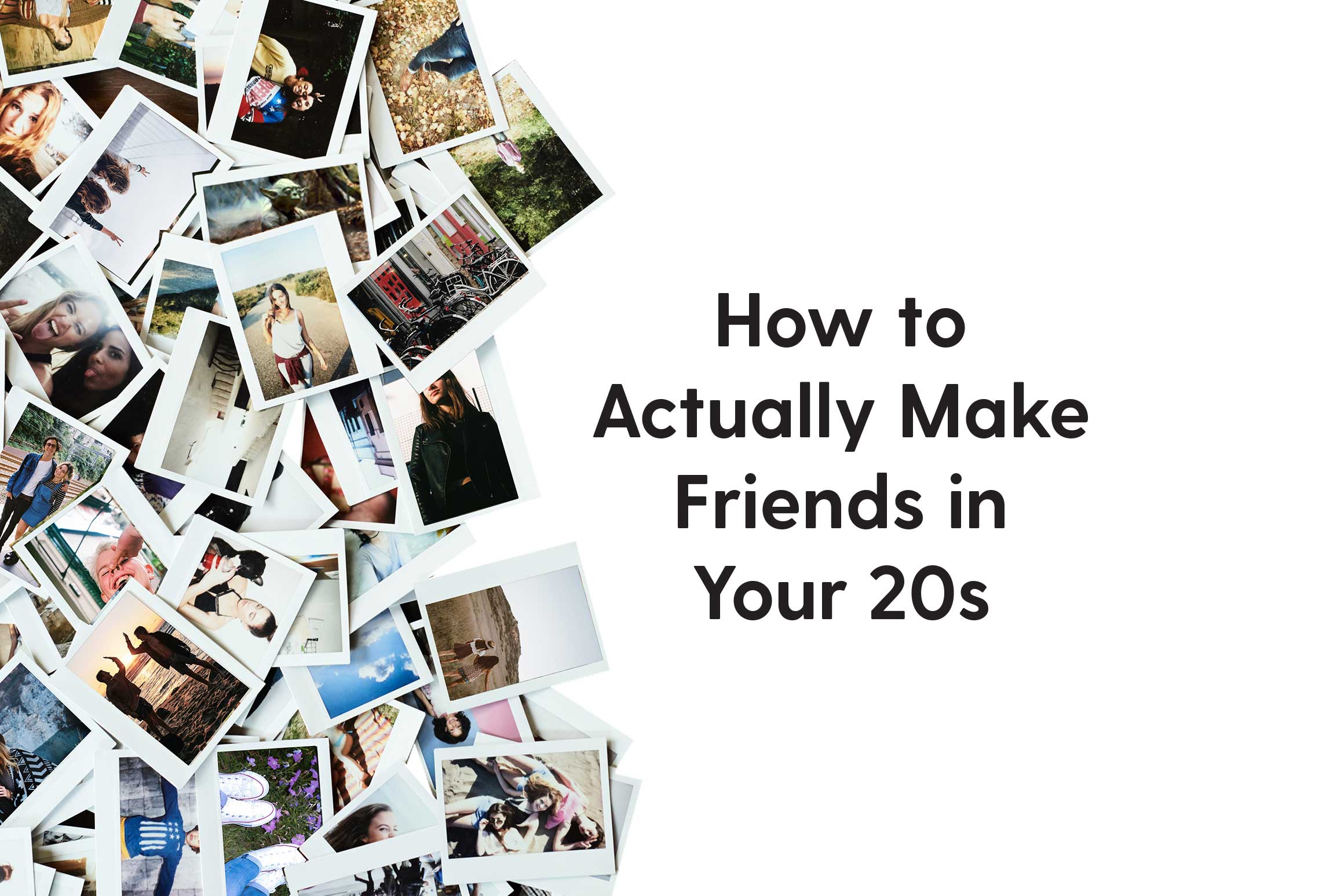 Most kids find their best friend like this: One kid on the bus sees another kid reading a book. That kid is like, “Hey, can the girl on the cover really turn into a skunk?” The other kid’s like “Yep,” and then they start talking about what animals they’d want to turn into if they could. Sixteen years later, they’re standing in each other’s weddings.

This article is part of our Quarterlife series, produced in partnership with Unite Health Share Ministries.

A 2018 Cigna survey found 56 percent of people feel those surrounding them aren’t “necessarily with them” and 40 percent feel their relationships aren’t meaningful. Adults are lonely, but kids can (and do) make friends with a rock. Something’s missing—or lost—when we stop trading Go-Gurts and Gushers in the cafeteria.

“When we were younger, most of our primary relationships were supported by institutions,” says Erin Lane, author of Lessons in Belonging from a Church-going Commitment Phobe. “But when you age out of institutions, it becomes a hustle to cultivate friendships on your own. They require more margin on our part to support.”

You might be thinking this boils down to “making friends as an adult means a little more hard work,” and to that end, you’re right, but then you might be thinking, “I don’t want to work hard, so my TV can just be my friend.” Not so fast. People need community. Why? Because, believe it or not, the Bible says so.

In John 13 Jesus tells His disciples, “As I have loved you, so you must love one another. By this everyone will know that you are my disciples.” Richard Lamb, author of The Pursuit of God in the Company of Friends, points to this verse as the linchpin of the way Jesus calls us to be in relation to one another.

“To look at the many interactions between Jesus and His disciples, He called them not just to Himself but to each other,” he says. “We think of discipleship as something an older person does to a younger person in a weekly meeting or something, but in the Gospels, we see the mark of a disciple was that they loved each other, not just Him. That’s how Jesus showed us the importance of relationship in ministry and mission.”

So, checkmate. We need friends.

The Bible calls us to be in close friendship with one another, but you’re still a grown-up and grown-ups have a hard time making friends, so how do we do it?

Let’s start with Aristotle. In his writings, the Greek scholar and philosopher articulated three general motives for friendship. Friends enjoy each other, are useful to each other and share a common commitment to the good.

These ideas aren’t based in any sort of theology, but they are the roots of any strong community, theological, Christ-centered or otherwise.

Childhood friendships are immature enough to survive on the first two things, evidenced by you and your besties always watching Kim Possible together (enjoying each other) or trading desserts at lunch (being useful to each other). As an adult, a more mature friendship will require more of the third dynamic: serving together, sacrificing together and pursuing a mutual purpose.

As Tim Keller writes in the friendship chapter of his book The Meaning of Marriage: “Friendship cannot be merely about itself. It must be about something else that both friends are committed to and passionate about, besides one another. Think of what that means for Christians. Christian friendship is the deep oneness that develops as two people journey toward the same destination, helping one another through the dangers and challenges along the way.”

If that has you doing a mental run-through of all your friends, that’s the point. As Lamb says, “Aristotle’s definition is not particularly Christian, but it’s robust. It helps you assess where you’re weak in your relationships. Christian discipleship asks what purposes you’re pursuing individually and together because of your faith in Jesus, and it asks how you can help each other do that more.”

This paints a pretty picture of friendship, but how do we enter into it? Lane expresses the need for adults to find margin when creating room for friendships, and she says they need to do so on three fronts: proximity, spontaneity and vulnerability.

That last one sounds pretty scary, so let’s table it for now. Making room for proximity and spontaneity is simple. You can’t make new friends unless you enter spaces where new friends are available and make time for those new friends.

Press into your community. Pick one weekly event you can attend three weeks out of four, like a fitness class at the gym or a worship service at church. Then go at the same time every week. You’ll see the same people each time, and in the biz, we call these people “unconceived new friends.” Time to make it happen.

Planning for spontaneity is trickier, obviously, but Lane advises doing exactly that: Carve out a block of time in your schedule each week where you won’t decide what to do until that exact moment, like 4 to 7 p.m. every Friday. Then, when you receive that random text or invite, you have an open slot. If you want, you can even be the one to send that random text.

Is all of this as easy as it sounds? Pretty much, actually. Sure, this means opening yourself up to the possibility that you might get turned down for a good hang, but vulnerability is part of it. And, yes, it’s time to talk about creating margin for vulnerability with other people in our lives.

For starters, to be vulnerable requires both proximity and spontaneity, Lane says. You need not only to be present, but open to the invitation (from God or others) to share parts of yourself that will be surprising. It’s scary, but it’s another key litmus test for creating a truly meaningful relationship.

And realize who’s showing up for you. That’s how friendships grow. Reciprocate with people who reach out to you, and make sure you don’t leave the entire burden of initiation to fall on just one person. You want people who don’t make you apologize when you ask them to be there at an inconvenient time, or when you ask them to show up when you can’t offer them anything in return. Those friends respect the difference between you and themselves, but they also seek a one ness with you, evidenced by their presence. That balance between individuality and togetherness is vital to vulnerability, Lane says.

Further, it gives you room to mess up as a friend. That’s another thing that comes from the Gospels: The disciples messed up a ton in their relationships with each other and Jesus. They bickered and competed and sometimes pandered to Christ. Jesus showed them grace throughout all of that, admonishing them for their mistakes (“Get behind me Satan.”) but forgiving them and caring for them as well (washing their feet).

FRIENDSHIP IS A PRACTICE

“To have people we can course-correct with is really freeing,” Lane says. “Friendship is a practice, not a privilege. We’re in practice with one another to become our true selves and the people God has purposed us to be. We’re going to get it wrong a lot, and we need people who get that. There’s a lot of mercy in the relationship.”

It’s never too late for a new relationship, so start making the effort. The timing might actually be perfect. After all, we make old friends when we’re kids, but we only know how to be an old friend when we’re adults.