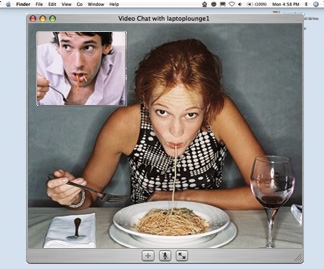 Ringtones echoing, “You’ve got mail,” old-fashioned postage-licked letters: each has their place, just as carrots, broccoli and fish each have their place in the American diet. With the advent of the Internet, webcams, Twitter, Facebook, and a host of new media in the market today, you can know the heartbeat of a kindred spirit through a variety of methods available to stay in touch.

This is especially true in long distance relationships, where two people unable to geographically share life in day-to-day encounters still make the effort to stay close at heart.

Nathan and Jennie are one such couple who spent two-thirds of their relationship at least one time zone apart. They are currently three time zones removed from each other.

Nathan asked this very honest question of his now fiancée, Jennie. Nathan and Jennie have been friends since undergrad at Olivet Nazarene University in Illinois. They first met in philosophy class in the spring of 2005. By summer of 2006, their special interest in each other became official. The couple began serious dating. As graduation neared, Jennie looked into grad school and Nathan filled out an application for seminary.

After the tossed tasseled caps were carefully placed on dressers for display, Jennie and Nathan, eyes locked in gaze, regretfully hugged. Not a “goodbye forever” kind of adieu, just a “what will life be like, not seeing you every day” kind of regretful embrace. Both were certain they were meant to be together, but the question was, when.

Nathan now lives 30 minutes from the sunny Santa Monica beach on the Pacific. Jennie, on the other hand, lives a mere 12 minutes from the splashing Atlantic boardwalk and surfer’s paradise. Their combined distance apart? 2800 miles or 41 hours by car.

“We still have regular date nights,” Jennie’s glow matched the gleam of white teeth as she flashed a smile. “Often on a Saturday night we call each other, decide what we’ll eat, and go get take-out at the same place. Then we pick what movie we’ll watch, and we both eat dinner and watch a movie together.”

“We spend a lot of time on the phone,” Nathan says. Thanks to Google Talk, Verizon and their new webcams, they have read through the Bible together. Reading has always been a favorite shared dating activity. Chat programs have been vital in deepening their relationship across the miles.

Jennie, now a second-year graduate student in Regent University’s Robertson School of Government, has what seems like boundless energy and enthusiasm for life. Her Facebook status line regularly spouts pithy lines professing her love—always ending with a stream of exclamation points. One easily gets the idea that she inadvertently held that keyboard stroke too long … or that she is indeed very much in love.

“Nathan is so good with writing,” Jennie replied. “I just melt with his notes.”

Just before Thanksgiving last fall, Jennie received a dozen red roses, delivered on Friday to her door with a small, white card attached. It read, “I would be honored to have your presence for a formal attire webcam date tomorrow night at 10:00 p.m.” Signed, Nathan. Promptly at 9:00 p.m. Saturday night, Jennie stood before the bedroom mirror, donned her “gorgeous dress” (Nathan’s words), and prepared for her big date, now only minutes away.

At the right moment, Nathan dressed in full suit, tipped down his web cam and dropped to a knee. Pulling a vase of flowers into view, he popped the question: “Will you marry me?”

“I was so happy I was crying,” Jennie said. “Two seconds after I said yes, he had already changed his Facebook relationship status. He was excited to tell the world … I went in and hugged my aunt.” Containing the excitement was impossible while they placed phone call after phone call to family and friends long into the night.

“At 2:00 a.m., we were still watching each other on webcam while we made our calls. My face hurt from smiling so much!” Jennie continued.

How You Can Actually Change Your Workplace’s Culture

Nathan and Jennie spent the 2008 Christmas holidays together enjoying family in both Indiana and Illinois. Was this break memorable? Jennie thinks so. Nathan made sure of that by presenting his true love with a beautiful diamond engagement ring—this time, of course, in person. He dropped to the knee and slid the ring on her finger.

“I dreamed about this exact ring!” Jennie exclaimed. Nathan ordered the custom ring online without realizing it was precisely the one Jennie, too, had most desired, with adorning sapphires clustered around a diamond.

While Nathan wanted to propose in person, both Jennie and Nathan knew that realistically it was not financially or otherwise feasible to do with both of them in school. But Nathan knew the time was right.

The wedding is set for the popular nuptial month of July. Jennie will tell you that working thirty hours a week, planning a wedding and finishing a full-load final semester of grad classes is an unenviable schedule – yet one that Nathan competes with, while he includes a doctoral class this semester.

Jennie and Nathan are only one of thousands of couples who are finding creative, meaningful ways to connect across the miles. Using the power of Twitter and Facebook, duos can keep in sync with nearly every move of their significant other. Web conferencing technology is now as simple as sitting at a screen and firing up a web cam to check out a girlfriend’s new hairstyle or watch as your boyfriend serenades on his guitar—in real time.

For Nathan and Jennie who enjoyed an occasional dinner out, long study sessions at the campus library, nights on the Chicago town and who frequented Starbucks while in undergrad together, going the miles to learn effective relating long-distance was definitely covering new ground. If you asked them they would tell you it’s difficult, but doable—and definitely worth it.

“The Internet has been indispensible throughout our relationship,” Nathan affirmed.