Dane Hobbs didn’t have a TV or a car or even a cell phone….or, for that matter, a house. He had a wallet for awhile, but one day that got stolen, and with it went his license, library card and Social Security card, so he didn’t have those any more either. He didn’t even have his name, either, not really. When people asked him what his name was after that, he just told them he didn’t have one. Someone had taken it, he said. They’d needed it more.

So people called him Santa, because he had a big white beard and always smiled and laughed. It’s funny, because he’s the anti-Santa. He couldn’t give anything to anybody.

But Santa had one thing nobody has, but everybody has. He had the biggest house in the world, many said he once told them, because the sky was his roof.

Santa was a homeless man who died in late 2009. I met him, at least in a way, when assigned to profile a 17-year-old girl who held a food drive in his honor the Saturday before Christmas.

His homelessness came about by choice, not fate. Which maybe just means he was insane, but as I talked to people, it became clear he wasn’t. He was intelligent, people said; some even called him wise. Life didn’t put him on the streets, sleeping under nothing but the sky. No, apparently 12 years ago, he just put himself there. Before that he was a welder or technician or plumber of sorts, possessing myriad handyman-job certifications.

But he was no beggar. He held no signs. He never asked for as much as a cup of water. Sometimes he’d actually buy someone else a Pepsi. And he kept himself neat, too. He never smelled particularly bad, never seemed unbathed, never wore dirty clothes. One lady once said he once told her he washed his clothes in a bucket every other day.

And another thing about him, maybe the thing that made the least (or most) sense: he always seemed happy. Really happy.

“He did a lot more for me than I did for him,” one lady once told the local newspaper.

I wish I’d met this Santa. He seems way better than the guy who gives everyone what they want. I heard about him before the food drive. I want to talk to more people about him. But something in me senses there’s nothing more I need to know, which was summed up by what Santa’s brother, Bill Hobbs, once told the newspaper: “He just wanted the simple things in life. He didn’t care anything about the fancy stuff.”

We care lots about fancy stuff, don’t we? I do. I have a fancy computer, a fancy iPod Touch, a fancy new HDTV, a fancy (enough) Ford Explorer, a fancy pair of running shoes, a fancy leather-strapped watch. Many of these things are gifts, but some are not, and the gifts are things I really don’t want to go without.

Since learning about Santa, I’ve thought a lot about what it would be like to throw a pair of jeans and a t-shirt into a backpack, a couple of books, a few hundred dollars, and leave everything else behind. Maybe I’d give it away. I wonder what life would be like if lived on foot, dependent on others.

This whole episode, this learning about Santa and wishing I’d known him and getting to know him through those who already do, reminds me a lot of a column I wrote for my college newspaper once. A freshman named Maurel Domingo died during a pickup basketball game. Heart attack. Inexplicable. Then I wrote the story about it, and discovered that Maurel was one of those truly inspiring people, according to those who knew him, and in talking to them I was racked with the question: why did he die so soon?

I feel similarly about Santa. I don’t think God took him too soon or anything. He was in his fifties, maybe even his sixties. He touched lots of lives. And although nobody specifically said so, I think Santa knew God. This is speculation, pure speculation, but how else would someone become so aware of the how broken the world’s way of working is? How would he come to the point of realizing he needs nothing it offers, that he needs nothing the overwhelming majority of people either have or want to have. How could he come to believe that all that’s necessary for life is food, water, and a roof made out of sky.

Of course, I couldn’t leave everything behind and live out of a backpack. I’m married, and my career’s going well and I’m doing what I know I’m supposed to be doing.

In the column I wrote about Maurel, I explored why someone so young would be gone so soon. In like fashion, I’m now exploring why someone so smart would live so….homelessly? Freely? Selflessly? Did he truly feel that he was meant to live by giving everything up the way he did?

But like the end of that column about Maurel, I end this one in similar fashion, with the same question: why not me?

Why am I not called to a homeless life? Why do I have everything I have?

I don’t know exactly. Not yet. But I know one reason why not. Like Santa, my life’s not meant to be about getting fancy things.

So he did give people stuff. It just wasn’t fancy stuff.

Brandon Sneed is a writer living in North Carolina. 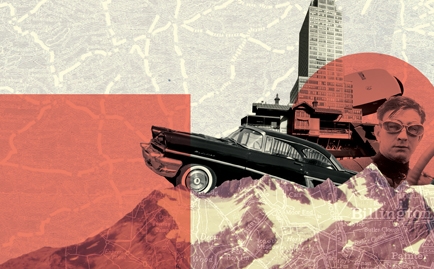