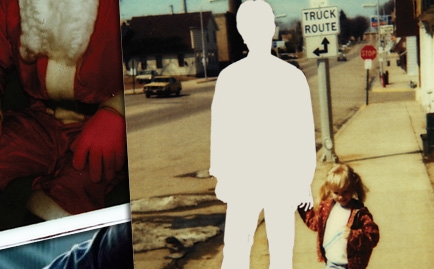 Giacomo Knox was part of that group of children growing up. He spent nearly 30 years wondering what happened to his father. His parents separated when he was just 4 years old, and his mother fled with him and his sister from New Jersey to Seattle because, she said, she was afraid of her husband.

Knox only heard of his father sporadically after that, usually through negative comments from his mother and her side of the family. There was never a stepfather in the picture, although some of his mom’s boyfriends over the years tried and failed to act as surrogate dads for him.

“I was a precocious child and a lot smarter than I should have been at that age,” says Knox, now 40 and a resident of Los Angeles. “Originally, her brief boyfriends tried but gave up because most men won’t date a woman who has kids, especially two kids. I was immediately rejecting any real attention because they’d set a pattern of leaving anyway.”

Knox certainly isn’t alone. An estimated one out of three American households with children are single-parent, and usually mother-only, homes. That’s an estimated 25 million fatherless kids. The epidemic of fatherlessness causes a strain on young lives and leaves many young men with the burden of trying to figure out how to be a good man without any solid examples to look to.

Author Donald Miller, best known for his popular book Blue Like Jazz, is one man who experienced a fatherless childhood and now works to increase awareness of the importance of fathers. A native of Houston, he now works in Portland, Ore., as the founder of The Mentoring Project—formerly known as The Belmont Foundation—a nonprofit group aiming to recruit 10,000 mentors through 1,000 churches across America.

Miller has become notable in the mentor movement because of his book To Own a Dragon: Reflections on Growing Up Without a Father, in which he recounts the impact on his life from his father leaving when he was 2 years old. As an adult, he has managed to find his father, and believes that attempting a reconciliation is well worth the effort.

“When you grow up without a dad, there’s an emotional instability that is transferred,” Miller says. “Humans get validation externally, not internally. They tend to take blame for themselves, and it affects their self-esteem. I grew up with all the ramifications of growing up without a dad. The research is out there and it’s not good.

“I see it as the lead domino in a whole litany of problems,” Miller says. “Statistics show kids are more likely to stay in school, off drugs and have no [teen] pregnancy if both parents are there. That means fewer abortions, too. Ninety-four percent of people in prison are men, and 85 percent without fathers.”

However, some people who grow up in fatherless homes, like Miller and Knox, do go on to forge solid, productive lives. The most famous current example lives in the White House. President Barack Obama’s father largely abandoned him as a young child, leading him to engage in an adult quest that led to his best-selling memoir, Dreams of My Father, and the attendant acclaim that helped launch his political career.

Yet even as he’s attained the status of “most powerful leader on earth,” Obama has not forsaken his youthful hardships and has made strong father-child relationships the basis of a ubiquitous public service announcement campaign currently running on television in conjunction with the website Fatherhood.gov.

In the PSA, Obama says: “To be a good father is the most important job in a man’s life. … Things get busy, and sometimes we all fall short. But the smallest moments can have the biggest impact on a child’s life. Take time to be a dad today.”

According to Sheila Thornton, a licensed clinical social worker who is site director at the 80-year-old agency Foothill Family Service in Pasadena, Calif., there are some often overlooked truths about the important role of fathers in people’s lives.

“Because of biology, women give birth to children, so there’s more attachment or a special attachment,” Thornton says. “Not having a father not only hugely impacts the child but the family. Children benefit from the nurturing of [both the] mother and the father, so it’s a challenge.”

Thornton also points out the financial aspects of a fatherless home—the added stress and difficult realities of mothers trying to raise kids on one income and, if they need a second job to get by, with less time to nurture their children and put food on the table.

“The role of a dad is a really important and unique role that is supported by the role of mom, and it impacts kids throughout their lives,” Thornton says. “That doesn’t mean kids can’t grow up and be successful, but it puts an extra burden on the parent that’s left. I think when there’s a parent missing in the home, or even if the dad’s there and not present in the child’s life, that kid grows up not knowing the importance of a dad in a child’s life.”

This can set a destructive cycle in which boys whose fathers disappear rarely learn the responsibility of sticking around to raise the children they have later in life. But the lack of a father in the home doesn’t solely affect boys: Research has found that teen girls without fathers are twice as likely to be involved in early sexual activity and seven times more likely to get pregnant as an adolescent.

Miller recognizes that women can also experience father issues. In the new introduction of To Own a Dragon—which registered so strongly with readers that it was re-released in April under the title Father Fiction—he writes: “Women suffer from father issues too, obviously. They may suffer more. … Women tend to become victims when they grow up without good fathers. Men tend to become oppressors.“

As an adult, Miller turned to writing to help work out some of his problems—the result being Dragon. While working on the book was cathartic, he draws strength now from his work with The Mentoring Project. So far, the group has developed mentorships for 150 Portland-area youths in nine churches, and the group’s more ambitious national goals are due to launch in the coming year.

“It’s a relational problem so you need a relational solution—guys who are mentors, speak affirmation and truth into their lives. I keep those men around personally, and it’s been an invaluable help,” Miller says. “Thankfully, there’s a trend toward fathers staying present. We have a masculinity crisis in this country, but it’s simple: being there, providing, being emotionally vulnerable and open. The Hollywood model of manhood works against us in so many ways. The mentoring program I founded shows that if each church mentors 10 to 20 men without fathers, you can shut down prisons in 20 years. The only institution that can do something significant about this is the Church.”