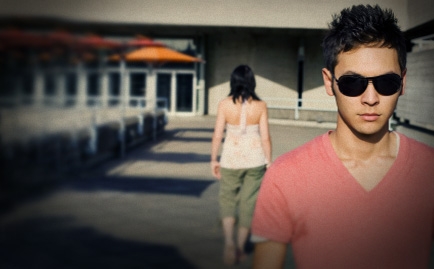 Romance is like the fragrance of magnolias on a cool spring day. But
then a gentle breeze wafts by carrying the unmistakable smell of cow
manure. As Simpsons creator Matt Groening said, “Love is a
perky elf dancing a merry little jig, and then suddenly he turns on you
with a miniature machine-gun.”

Maybe certain things about your
relationship have been bugging you for a while, but you haven’t had the
courage to talk about it. You can’t see a future for the two of you, or
you feel you just don’t have much in common. Maybe you’ve just grown
apart. Whatever it is, you know it’s time to call it quits. But you
don’t want to reduce your boy/girlfriend to a quivering heap of
shattered self-esteem and misery either.

“Getting out of a relationship is a hassle,” marriage therapist Donald Harvey admits in his book lovedecisions.
“The truth is that relationships are easier to get into than they are
to get out of. That’s why we sometimes stay in them longer than we
should.”

When you’re ready to do the deed, if at all possible, try
not to blindside your partner. Heather, a 22-year-old teacher from
Chicago, believes you should always let the other person know you are
not completely satisfied with the way things are going before ending it
altogether. “They should at least know that something is up before just
breaking up with them and not giving them a chance to change,” she
said. If things continue to go downhill, the warning signs will lessen
the blow when the break-up finally does happen.

That’s assuming it
does, in fact, happen. No one likes confrontation, and sometimes it’s
just easier to drop hints and hope the other person gets the picture.
The problem is, that just leads to unnecessary emotional torture.

“The
worst break-up for me was probably the ‘non-break-up,’” said Diane, a
24-year-old reporter. “I thought things were going pretty well, but
slowly he started becoming too busy for me—fishing, softball, soccer,
hunting and the occasional nap were much more important than me. If he
didn’t see things working out with us, he should have let me know that
very minute and not allowed me to go on thinking he liked me. That is
completely disrespectful of the other person’s feelings.”

“Too often
we ‘hint’ and send a weak message, mostly because we don’t want to hurt
anyone,” author and iVillage’s Social Skills expert Mary Mitchell
explained. “The message becomes so diluted that the person we are
telling it to does not know what we mean. In other words, you need to
tell them you’re not interested—simply and straight out.”

Don’t put
off breaking up if you know it’s inevitable. For both your sake and the
other person’s, do it sooner rather than later. Do it in person—and in
private. Breaking up over the phone or worse, via email or text (and if
you’re even thinking of using Facebook or Twitter, you should stop
reading now and do some serious soul-searching!), is cowardly,
impersonal and insulting. And breaking up in a public setting to avoid
a scene may prevent your partner from expressing emotions that may come
back to haunt you later.

Offer concrete reasons why you feel the
relationship must end, but be sensitive. Don’t criticize or lay blame
on your partner, and don’t, under any circumstances, offer lame clichés
as reasons. Whatever do we mean, you ask? “It’s not you, it’s me,” tops
the list. While the sentiment may be sincere, it ends up sounding like
a cop-out, and it really doesn’t communicate anything meaningful.

Coming
in at a close second: “God told me to end the relationship.” Who can
argue with a decision that comes directly from the heavenly throne
room? Exactly. Using this line just makes you come out looking like a
saint and your partner looking like they’re not capable of hearing from
God.

Allow the other person to share how they feel—don’t just say
your piece and jet. “Give your partner closure,” offers “10 Ways to
Break Up Graciously,” a list of break-up tips from About.com. “Try to
sit down and give your partner time to talk when you’re breaking up.”
Be aware that they might not be able to process everything in that
moment, and a future conversation may be in order. But if they need to
rehash and rehash, it’s time to cut the cord.

While it’s important
to let your partner talk, odds are they’ll try to convince you a
complete break isn’t necessary. Don’t let them change your mind. Remain
firm. If you give in or express uncertainty, your partner will
interpret that as hope. But the sooner they know it’s truly over, the
sooner both of you can begin the healing process.

Edward, an artist
from Kentucky, learned the hard way that leaving the door open only
leads to more hurt feelings. “Don’t string someone along,” he advised.
“If you’re thinking about breaking up with someone, make sure that you
don’t get physical with them afterward. You have to draw the line at a
friendly hug on the way out. Anything more than that will send the
message that the relationship still has a chance, and if you’re serious
about breaking up, you’ll only make the whole thing worse.”

And
lastly, what would an article on breaking up be if it didn’t mention
the naïve absurdity: “Let’s be friends”? While a friendship with a
former significant other isn’t impossible, it’s unlikely the transition
to friendship can be made right away. We’re slamming clichés here, but
one that actually rings true is “time heals all wounds.” You and your
partner need time apart. Resist the urge to make random phone calls
“just to say hi.” Stop sending your daily emails to talk about the
day’s activities. You aren’t being inconsiderate or rude by doing this.
You’re allowing the emotional attachment to loosen its death grip on
your hearts so you can move on.

Odds are, you’ve blundered on one or
two (or all) of these points in the past, and you’ll probably flub in
the future if you’re ever faced with the unpleasantness of ending a
relationship. The key word to remember is “grace.” You’ve received it,
so make it your ultimate goal to extend it to others regardless of the
circumstances. You’ll find that things go much more smoothly.

This article originally appeared in the September/October 2003 issue of RELEVANT.

7 Ways to Add to Your Holiday Income