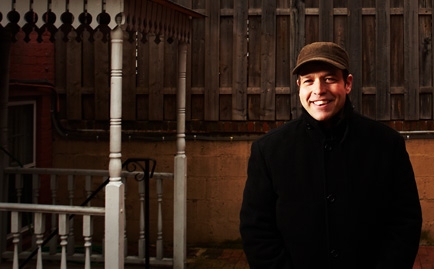 “My dad is alive but the police say he can’t talk to me anymore. I hope he is okay. My aunt had to go to court to ask the judge if she could have me, my brother and my sister. The judge said that would be okay. That was 6 years ago.” Shawn pauses for a minute, looked at his aunt (mom) Pamela and said, “Is my dad still alive? Will I ever get to see him?”
Shawn is not alone. Currently over 27 million youth in America are growing up without their fathers. According to the U.S. Department of Health and Human Services, fatherless boys are at a greater risk of drug and alcohol abuse, mental illness, suicide, poor educational performance, gangs and criminality. In fact, a stunning 85% of all young men incarcerated today grew up in fatherless homes.

Shawn is a boy who is being mentored by The Mentoring Project, a non-profit organization founded by author Donald Miller, based in Portland, Oregon. Their mission is to end the American crisis of fatherlessness nationwide by inspiring and equipping the Church to provide mentors to fatherless boys.

“We’re three years into the program but we’re really one year into building the program,” says Miller. “The first two years were getting legal and hiring staff and all that. So we have a hundred kids that we’re mentoring out of nine programs in Portland and we have 300 churches on a waiting list to start programs. My chief job is to raise money, and so that’s one of the reasons we’re raising money on the [Million Miles] tour."

The starting goal of The Mentoring Project is to see 10,000 mentors who can pour into the lives of these boys. Mentors provide a safe resource for young boys to have honest conversations. Without a dad around, how does a young boy to learn how to be a man? In spending time with mentors, boys begin to trust and the mentors begin to speak wisdom into their lives. Since a father can never be replaced, TMP believes the work of reconciliation can happen through mentoring.

"There are at least two perspectives here," says Dr. John Sowers, the new president of The Mentoring Project. "One is the fact that fatherlessness has been linked to all kinds of social problems. I read one statistic today that something like 39.7% of all births in the United States today are from unwed mothers, so it’s just creating more fatherlessness. As for the actual fatherless children themselves—the sociologist David Blankenhorn says that fatherlessness is the engine that drives our most urgent social problems, from teenage pregnancy to suicide, drug abuse and gangs. The more I study this issue, the more I realize I can’t overstate it.

"From the other perspective, it’s a big deal from scripture," Sowers continues. "When you look at it in terms of this God we serve who in Psalm 68 is a Father to the fatherless. And we are called to be imitators of Him, so we really can’t be any less. How can we be any less than Him who has called us to be like Him? There are almost 40 verses in the scripture about His heart for the fatherless—how He protects them, provides for them, defends them. So it’s something we believe the church needs to speak to. It’s in relationships that this generation has been wounded most deeply, and so it’s in relationship that they can be healed—a relationship with God and a relationship with caring and consistent mentors."

For Sowers, the issue and TMP are personal too: "
I grew up in a home without a dad or a granddad. I saw my dad once a year,” he remembers. “I love my dad—I just never saw him, he wasn’t very involved in my life. When I was about 25 years old, I really began exploring this and the effect it had on me, and at the same time I wondered how it was affecting my generation. I started asking those bigger questions. And I started listening. And it seemed like everyone I was listening to, everyone I was running into, for that season and even up until now, were talking about this fatherless story. It’s in our movies, it’s in our songs. It’s all over the place. I began writing in earnest about it. It’s been a personal story that’s becoming a personal calling.”

Sowers believes that, “the intentional, life-on-life impact of mentoring is the most strategic way to reach the next generation. Mentoring is the way of Jesus. He gathered one or a few around him and then poured his life into them.”

Miller agrees the quality of those relationships matter—even more than the numerical goal. “Will we ever hit our goal [of recruiting 10,000 mentors]? You know, it doesn’t matter to me if we hit it, as long as we have this point on the horizon that we’re always marching toward. I’d rather have a quality program than to reach some statistic. But I think with any kind of leadership you have to say, ‘We’re going here’ and it has to be some ambitious vision that’s bigger than you can possibly accomplish, so that’s why we threw those numbers out.”

This past spring, The Mentoring Project was honored to join the White House Task Force on Fatherhood and Healthy Families. One aim of the Task Force is to facilitate a national conversation on reaching fatherless children and to bring national leaders together on the issue. Growing up himself without a father, President Obama urged the country to get involved: “We need committed passionate men to serve as mentors … even if it’s for a couple hours a week shooting hoops, or helping with homework, or just talking about what’s going on in that young person’s life. Even the smallest moments can end up having an enormous impact, a lasting impact on a child’s life.”

“It is an honor to be on the Task Force,” Miller says. “The focus of the Task Force really is healthy fathers as that relates to healthy marriages. The goal of the task force is really ‘how do we keep fathers, how do we help fathers stay with their families and not leave their families, and how do we strengthen fathers while they’re fathering?’.

“After feeling like I really don’t belong [on the Task Force]," Miller continues. "Now I feel like I really do have a voice there, because I’m the guy in the room saying ‘What about kids growing up without dads. What can we do to help those kids?’”

After three years of working locally in Portland, TMP plans to launch nationally in the summer of 2010. With the launch several months away, enthusiasm for TMP is growing both within the organization and with partner churches.

“It’s an amazing program. I want to retire [from writing] at 55 or something and just work for them,” Miller says. “I’m already working for them in the sense that I’m on an executive committee … I think as the organization grows, my power will grow less and less, and I look forward to that. And so I think that’s my future.”

There’s Tension in Every Modern Family

5 Ways to a Stress-Free Office Holiday