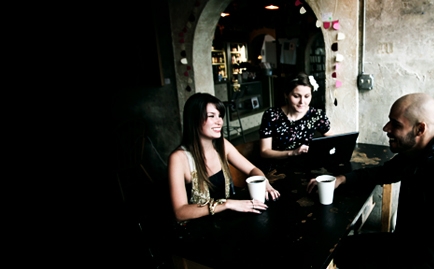 Last month I visited a prison in Texas. I had the chance to guest-teach a class in a progressive rehabilitation program. I taught, but mostly I listened. As the guys told me their stories, their reasons for being in prison, I noticed a common thread. The real reason they were in prison was not because they had committed crimes, though they had, but rather it was because of the people they hung out with. Almost all problems and success in life boil down to relationships. These guys had gotten themselves into relationships that led to trouble. Either they had joined gangs or hung out with drug addicts or met girls who took them down a bad path.

The reason they were in prison was because their friends, in a way, put them there.

Everybody needs love and affirmation, and there are appropriate ways to get it and inappropriate ways to get it. Because people like me—and some of you—grew up without both parents, there is a good chance some of that affirmation wasn’t received. And so it might have made us a little desperate. I was a loud kid, I acted out, I got in trouble a great deal. I was just trying to be noticed because I was designed to be noticed, and the people who were supposed to notice me weren’t there.

And so when they didn’t notice me, I acted out more. And got in more trouble. And honestly, I became annoying. I’d annoy adults, and they’d just stay clear of me or roll their eyes. And then I started feeling sorry for myself and acting out more. I was asking for attention and affirmation, but I wasn’t asking for it in an appropriate way. It was a cycle, and it wasn’t getting me anywhere.

We were designed to be affirmed and loved, and there are appropriate ways to ask for that affection. The primary way to receive the attention and affirmation we need is to affirm and care for others. I’m not talking about being sappy here. That would annoy people. I’m just talking about being a good, loyal friend. We think that people will like us more if we are funny or athletic or good looking, and some of that really does bring us attention, but what everybody really wants in a friend is somebody who is self-assured and loyal. I say self-assured because nobody wants a guy hanging out with them all the time who is kissing their butt. Don’t beg for friends, just be a friend.

A few years ago, I handpicked some guys I wanted to be friends with. I already had some good friends, but knowing you become like the people you hang around, I decided I wanted to take more responsibility for who I was becoming. I looked around and identified about four guys who didn’t know each other very well, but each of whom I wanted to be like in some way. They owned their own businesses, they were faithful to their wives, they were intelligent. I asked each of them if they would get together for breakfast on Tuesday mornings In Portland. To my surprise, each of them said yes. And so we met. I told them that, essentially, I thought of them as great guys and wanted to figure out how we could spend more time together, helping each other’s businesses and running our lives through the collective filter of our experiences. Amazingly, each of these guys had been looking for the same thing. It’s something we all want, after all.

In a way, I now have brothers to share life with, to do life with. And I am becoming like them too. These aren’t guys who complain about their bosses or disrespect their wives. And so, naturally, when I encounter men who do that sort of thing, it strikes me as weak, and I pull away. That’s just not who I am. Or rather, that’s just not who I want to become.

All that to say, it might be time to look around at the people you’re hanging around with. Are they the kinds of people you want to be like? I know that sounds terrible, like I’m asking you to disrespect your friends. I’m not. But I am asking you to be honest. Are they holding you back? Are they really good friends, or are they just using you? Are you going to end up in jail if you keep hanging out with them, if you keep doing the things you are doing in order to get them to notice you or affirm you?

If you don’t want to leave your friends, it might be time to have a hard conversation and explain you want to move on, maybe go to college or learn a skill. And you can invite them to join you. If they don’t want to, you certainly gave them a chance.

If that doesn’t work, you need to find a new community. It might be lonely for a while, but you’ve got to do it. Don’t say you can’t, because you can. Go online and find a kayaking class, a chess club, a book club, a karate class, an internship. Take responsibility for your life. If your friends are heading to prison, leave and head in the opposite direction. Find something better. The world needs you to be a better person.