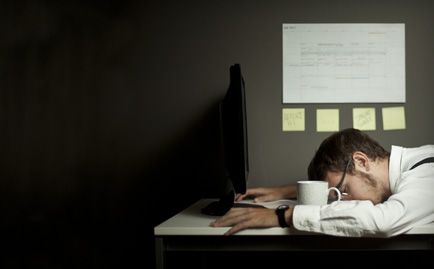 Work is a curse. Don’t forget, the Bible says so too. Doesn’t that make you feel better already?

While mankind’s first command from God was to work and be productive, one of the consequences God guaranteed to Adam after “the fall” was that his gardening work would become significantly difficult.

I don’t garden though; I teach. And teaching is hard work. Sure, it’s not grimy enough for Mike Rowe to show up on campus to film an episode of Dirty Jobs, but the occupation can be frustrating.

Sometimes, I leave campus feeling defeated, wondering if I did anything worthwhile for the Kingdom of God. I often ask myself: “Did I miss the God moments while at work? In the midst of my 9-to-5, did I miss some opportunities to live a life of praise?” Work can frequently seem monotonous or trying.

I get frustrated when a Christian student boldly plays what I’d like to, unfortunately, call the “Jesus card.” Students are sometimes so wrapped up in their plans to honor God years later in the mission field, or even later in the day at a Bible study, that they forget to honor Him in the classroom.

Years ago, I had a seminary-bound student who was an outspoken leader of a college ministry group. To be honest, he was one of the laziest students I’d ever had. His grades suffered because he wanted to do the absolute minimum to pass, turning in mediocre work just to squeak by when I knew he had phenomenal potential. I’d be a little hurt by his ability to look outside the classroom’s window like he’d never been outside before as I lectured, ironically, about the importance of active listening.

As a Christian, I was frustrated not only because it meant that maybe my classes were a little dull, but because I knew there were other faculty members and plenty of students who weren’t believers that also noticed this slacker for Jesus.

Often in the midst of a busy day, I would find myself off task and unmotivated too. There’s a certain level of privacy and freedom that comes with having your own office, which can really put your work ethic to the test. Instead of working on something meaningful and work-related, I found myself on a smartphone app assisting some fuming fowl in their quest to destroy structures and send swine packing. I’d tell the world what I’m working on via Facebook and Twitter updates instead of actually doing that work. One day, it finally dawned on me that I should be spending my workday pursuing excellence in the same way that I’d hoped my students would.

Working hard is obviously the right thing to do, because it’s literally your job, but it’s also a practical way to honor God in the everyday moments. He’s called you to honor Him during the daily grind, too.

Having a poor work ethic can be an easy thing to fall into. Whether it’s working with less intensity when the boss isn’t around or choosing to joylessly do just enough to get through your shift without being fired, the temptation is looming alongside your alarm clock on Monday morning.

However, if an outspoken Christian is lazy, people notice and they make a damaging association; it paints Jesus in a negative light.

Don’t take it from me; consider that working hard shows up in Scriptures several times, like in Ephesians 6 and throughout the book of Proverbs. God provides principles that can apply to any employee or student. For example, Colossians 3:24-25 says, “Whatever you do, work at it with all your heart, as working for the Lord, not for human masters, since you know that you will receive an inheritance from the Lord as a reward. It is the Lord Christ you are serving.”

This is especially important when, through your workday contributions, you’re affecting the reputation of your faith to those that don’t practice Christianity. Bob Briner in his book Roaring Lambs argued that your co-workers, bosses, instructors and students don’t mind that you’re a Christian as much as they mind your work ethic. They can deal with a different worldview, but what they can’t deal with is someone who isn’t working as hard as them. In 1 Thessalonians 4, we’re encouraged to work hard so that our “daily life may win the respect of outsiders.”

Think of it this way: Jesus was, by almost anyone’s estimation, more than a carpenter. But wouldn’t you imagine that a chair or table handmade by Jesus of Nazareth would be the epitome of fine workmanship?

When Are You Actually an Adult?

So, work hard and keep the everyday moments in perspective. You’ll spend about a third of your adult life at work, so consider those 40 or so hours a week as an opportunity to glorify Christ. When you elevate Him by working skillfully at your place of employment, keeping in mind your abilities and contributions enhance God’s reputation, your workdays won’t seem so wearisome.

Whether your work is in a classroom, in a restaurant, in a cubicle, at home or wherever, your job matters to God. Remember, no matter what you think of it, your work matters to those around you. Otherwise, it wouldn’t exist. Imagine the average day without any waiters, doctors, plumbers, cashiers, trash collectors or baristas on the clock. People depend on you more than you’d imagine. In Proverbs, the hard-working ant is praised as an example of a creature working diligently with others toward a common purpose. Ecclesiastes 2:24 reminds us: “People can do nothing better than to eat and drink and find satisfaction in their toil. This too, I see, is from the hand of God.”

I realize the odds that you are currently placed in your dream job are slim, but not everyone can be rock stars, taste-testers or astronauts. No matter how perfect or imperfect your job or class schedule may seem for you, God has provided you with an opportunity to learn something that will prepare you for what lies ahead. Hardly any of us know what we’ll be doing in a few years, let alone in a few decades, so trust that God is using your current situation to give you wisdom and equip you for His purposes. Proverbs 19:20 says that you should gather all the advice and instruction you can so you will be wise for the rest of your life.

If being productive is a struggle, you’re not alone. How do you get things done even when you want to? When Jesus talked about the importance of counting the cost before choosing to follow Him, He also gave us a lesson in planning our workday, saying: “Suppose one of you wants to build a tower. Won’t you first sit down and estimate the cost to see if you have enough money to complete it? For if you lay the foundation and are not able to finish it, everyone who sees it will ridicule you” (Luke 14:28-29). So, plan and prioritize your tasks. If you set goals, you’ll be more likely to achieve them.

While laziness is not a characteristic of a Christ-follower, the Lord hasn’t called you to be a workaholic either. If you recall, God created everything in six days and rested on the seventh day. It wasn’t as if the Lord needed the rest, but He was setting a clear example for humanity to follow. Resting from work allows you to reenergize and truly focus on other areas of your life and, in so doing it, contributes to your physical and spiritual well-being. You won’t be able to give your God your best during the strenuous workday, unless you’re resting in Him.

In John 5:17, Jesus said, “My Father is always at his work to this very day, and I too am working.” When you clock in, log on or lace up for the day, you imitate God, who’s always working. God has placed you in your place of employment or education to show love to others and be an influencer for the sake of the Gospel. But, don’t forget, He’s also placed you there to do your job well. So instead of looking around for a distraction or maintaining a grouchy attitude while on the clock, look for opportunities to keep your focus on the task at hand while giving it your all. You’ll find you can get more done that way. It won’t be easy, but the Creator never promised work would be. Yet, your daily grind can be a daily act of worship, if you work at it. You’ll please your boss, your co-workers, your instructors or your students, and in doing so, you’ll be honoring Jesus in the process. After all, if He’s Lord, He’s surely your boss too.

Jeremiah Massengale lives in Williamsburg, Ky. with his wife and kiddo-boy. He teaches courses in communication arts at the University of the Cumberlands and occasionally enjoys writing about himself in third person.

Jeremiah Massengale lives in Williamsburg, Ky. with his wife and kiddos. He teaches courses in communication arts at the University of the Cumberlands where he also advises the student newspaper. Occasionally, he enjoys writing about himself in third person. You can follow him on Twitter at jeremiahpm.