Nate Bargatze is fresh off a show in Birmingham, Alabama. As one of the most in-demand stand-up comedians in the country, his job has slowed but not stopped for COVID-19. So there were still gigs, albeit of the “masked up, socially distanced, half capacity” variety that has come to dominate public gatherings over the last few months. For the most part, these have been fine. In fact, he notes, given how jam-packed some comedy clubs could be in the before times, half-capacity felt almost normal.

But this show was at Birmingham’s Church of the Highlands, an enormous space that used to seat thousands but for this show, limited its capacity to 500 throughout the theater. “You could feel it,” he says. “The room was so big that it just doesn’t sound the same.”

It’s not that the material isn’t good. Indeed, Bargatze’s new stand-up special “The Greatest Average American,” headed to Netflix in March, contains some of the funniest jokes of his very funny career. And it’s not even that people aren’t laughing. They are. We’re all a little cooped up right now, prone to laugh or cry at small things or just for no reason at all. The net is lower than usual for dunking a great joke, and Bargatze’s jokes do kill. It’s just that, in the context of a small crowd in a big room, the energy just isn’t the same.

Welcome to the world of Nate Bargatze, the rare stand-up comic success story. In an era of TikTok gags and YouTube skits, Bargatze has established his career the old-fashioned way: really funny jokes. His stand-up is a series of funny stories from his own life told with military precision, navigating the rhythms of each story beat with astonishing mastery. The first time you watch him, you’re laughing too hard to notice the skill involved, but Bargatze’s comedy rewards repeat viewings. He’s a funny guy, but he’s not just a funny guy. Bargatze is serious about the craft, and it sets him apart from the thousands of amateur Twitter goofballs and Instagram meme farmers.

And maybe in the plague winter of our discontent, that’s the sort of comedy we need. Not exclusively off-the-cuff snark or gonzo non sequitur, but someone who can pull back the curtain on the humor of everyday life — pandemic or otherwise. 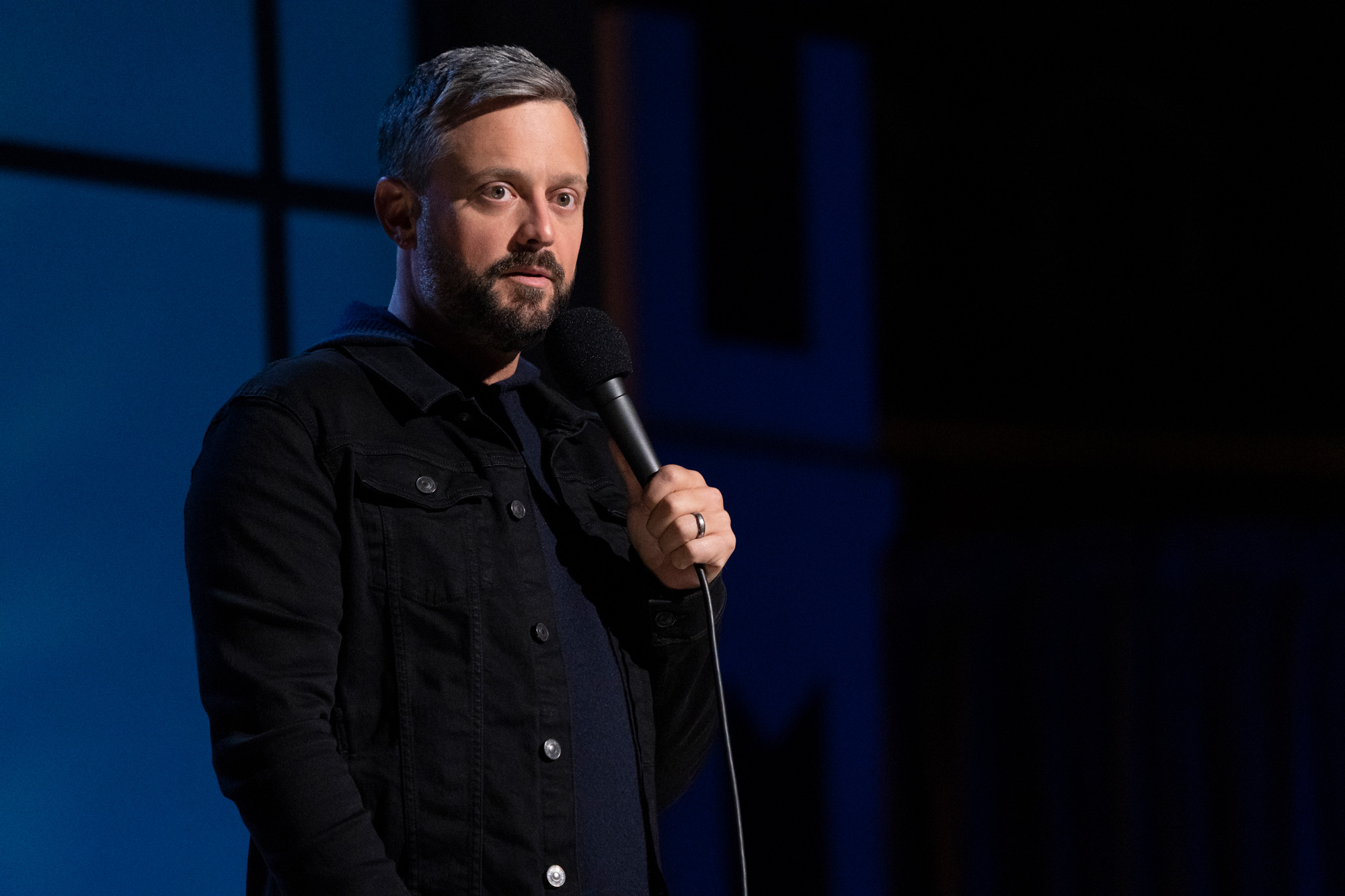 “Humor is just making fun of a situation,” he says. “But humor is what gets people through a lot of things.”

Bargatze grew up in Old Hickory, Tennessee, the son of a magician who incorporated comedy in his act.

“I wasn’t the class clown. I wasn’t walking into doors,” he says. “It wasn’t this obvious thing. None of this stuff felt like it was possible. Luckily, I didn’t have college and I really had no plan.”

Given his dad’s work, it’s not surprising that Bargatze’s parents were supportive when he decided to try his hand at stand-up. Maybe even a little too supportive, to hear Bargatze say it. “My parents are very middle class,” he says. “They don’t have all this money to just be throwing around, but they would always give it to me. I entered this contest in Florida. I think it was a $1,000 entry fee and there was a hurricane, the whole thing got canceled. They didn’t get their money back. I just wasted like a thousand of their dollars and didn’t even get to do it. It didn’t stop them. They always just kept saying, ‘Yeah, go for it.’”

Bargatze studied the comedy styles of Brian Regan, Sinbad and Jerry Seinfeld, honing his skills and working his way through the comedy ranks. He joked about himself, his life, his mistakes, his friends, his family. He found fodder in his marriage, airing the laundry out on stage.

“At the beginning, when I would do jokes about my wife I remember people would be like, ‘Why are you even married?’ And I was like, ‘Well, that’s not how you’re supposed to be taking this joke.’”

This is where the craft came into play — learning to tell funny stories about serious things in a way that does justice to both the lightness and the gravity of the subject at hand.

“I had to learn how to tell it where it’s like, you can tell that I do love my wife and I love my daughter and I love everything and these are just the funny things that we’re talking about,” he says. “But you have to learn how to tell it like that. Or otherwise it can come off where you’re…” — he trails off, searching for the right word — ”You don’t want people to feel bad from it.”

It’s gotten extra tough for him as a dad. He jokes about parenthood but admits that his young daughter admitted that she got her feelings hurt. “She didn’t like that joke because it felt like I was making fun of her,” he says. “And so then I was having to tell her it’s like, ‘It’s a parent making fun of every kid. It’s not making fun of you!’” 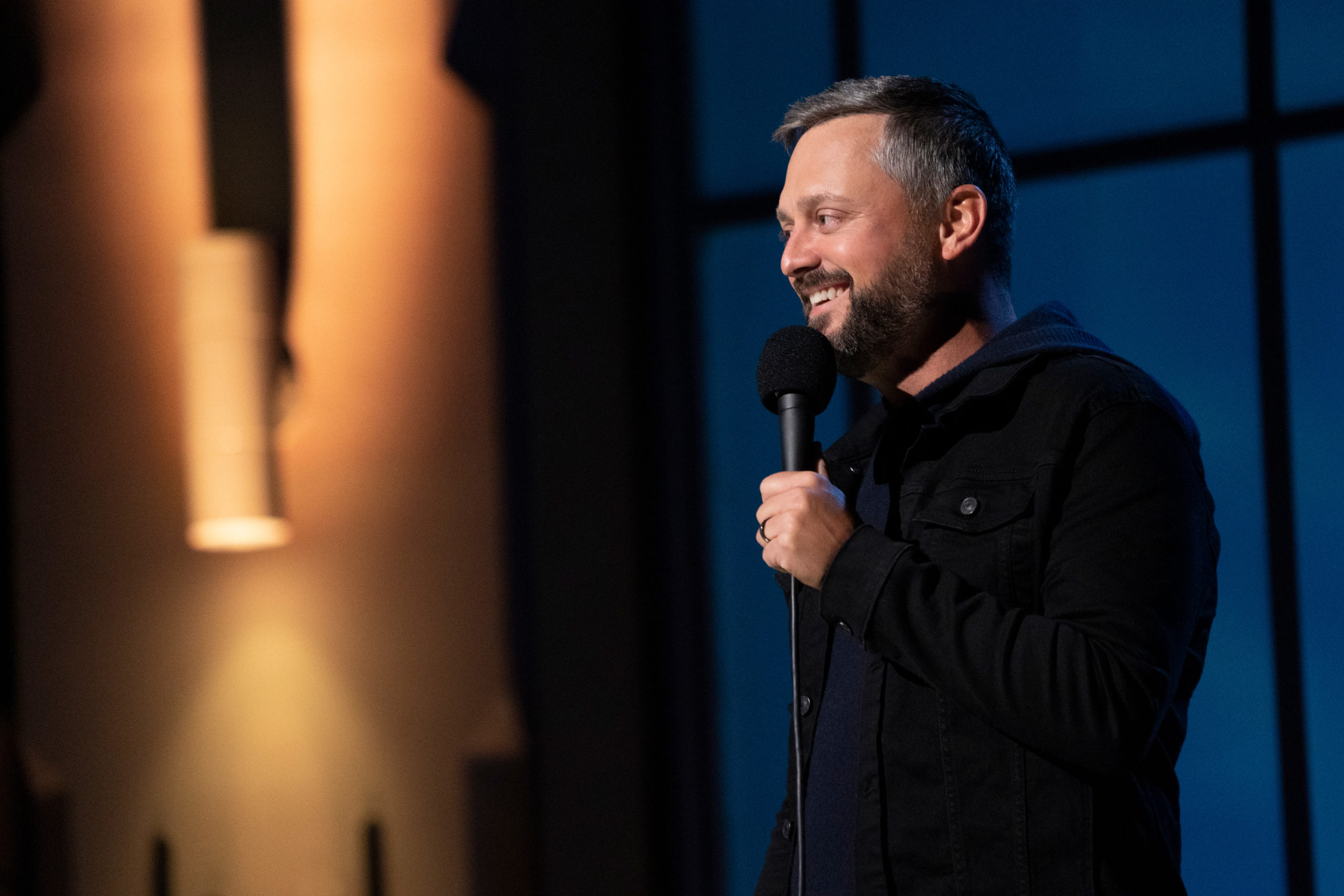 “But I don’t want to ever cross that boundary of where if something happened, she can’t come talk to me about it because she’s afraid that I’m going to say it on stage,” he says. “So I always tell her always, ‘I’m your dad and that’s first. I don’t have to talk about any of this stuff.’”

And if Bargatze’s daughter can smart from a punchline that went awry, that goes double for the breadth and depth of the American public. Netflix is a big audience, and Bargatze is telling jokes about real life — real life that sometimes involves things not typically considered funny.

This isn’t to say he’s an “edgy” comedian. He doesn’t set out to push buttons. “I don’t care about offending people,” he says. “That just doesn’t excite me. There are some comics that love it and they love pushing the boundaries and all that stuff. I just want to be funny.”

But his latest set opens with a few minutes about the global pandemic — a pandemic which has certainly provided plenty of material for good comedy but also taken a toll on our jobs, our livelihoods, our national unity and even some of our lives.

“You should joke about it,” Bargatze says. “We’re all going through it and obviously people that are losing their lives and they’re losing loved ones; they’re paying the price. You’re not taking anything away from that. You understand how awful that stuff is. But you’ve got to make jokes when something like this is happening.”

Bargatze draws a comparison to comedian friends of his who grew up in troubled homes. For them, joking about those things isn’t a way of making light of their experiences — it’s a way of processing what happened and making sense of it.

“They make fun of that because that’s how you deal with it. They try to make jokes about it,” he says. “And you don’t let it weigh you down. So you’ve got to hope that the audience takes your jokes like that.”

But Bargatze’s COVID material is only a few minutes long. He is not, at his core, an issue comedian. “People just need a break,” he says. “Everything’s too serious, everything’s political or whatever. It’s blending too much in our regular lives.”

“It’s hard,” he admits. “Sometimes I feel like I do get caught up in thinking like, ‘Oh, I should be saying something.’” Something, in this case, meaning “speak into the moral moment.”

“Everybody’s like, ‘You got a platform,’ which I think is insanity. My platform is being used to tell you what not to do; just go live your life like that,” he chuckles. “You should never listen to me.”

“I’m not for punching down,” Bargatze says. “That’s why all my jokes go through me. I did it, I’m an idiot. I’m the dumb one. And you can either laugh at me or laugh with me because you’ve done it.”

He has a few hard rules. He doesn’t like to make fun of the South, feeling that his home region gets enough grief as it is. He tries to steer clear of whatever everyone else is going after, preferring less obvious topics than whatever the political or culture figure de jour is. “Even competitively, I’m not going to be in the same market,” he says.

That’s another part of Bargatze’s seriousness. He’s serious enough to avoid easy targets like punching down and dogpiles. By putting the focus on himself, he invites a scrutiny he knows he can handle and tackles a target he knows better than anyone. It’s a smart way to approach comedy, not that Bargatze would ever presume to call himself smart.

“I’m barely high school educated. I don’t know what I’m talking about,” he says, laughing. “I just try to ride that balance in the middle and then just do that.”

And in that way, Bargatze can help America keep on laughing, no matter the circumstances. You can’t always hear it, but it’s there.

Check Out the New Single From H.E.R. and Tauren Wells ‘Hold Us Together (Hope Mix)’