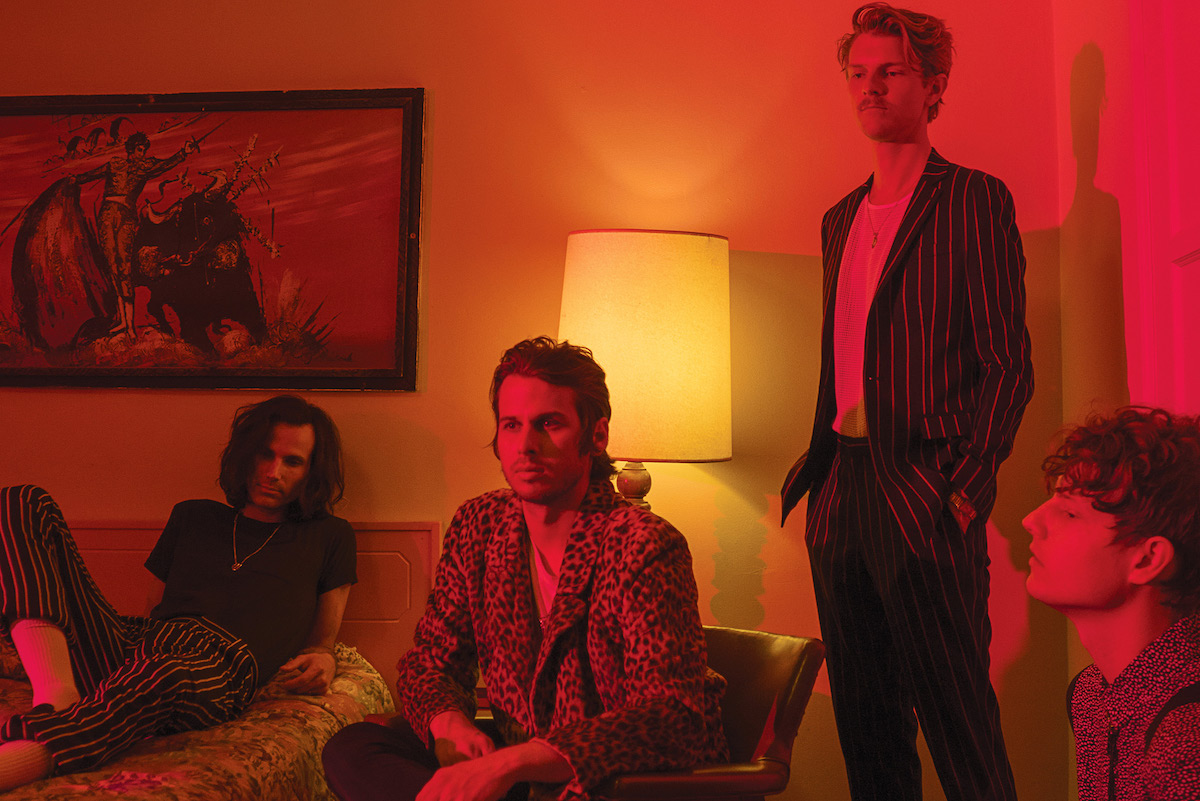 If you caught Foster the People on tour this summer, you may have witnessed a powerful moment, like what happened at the massive Hangout Festival where the band was one of the headliners.

In the middle of the set, the music stopped, and frontman Mark Foster talked about the importance of reaching out to people who are lonely, who are outsiders and who are being picked on. And the words landed with some extra poignancy. In the days leading up to the concert, gunmen had claimed victims at a church in Texas and several high schools.

“Talk to them,” he said. “Sit next to them. Reach out because that’s how we change things— from the inside out.”

He went on to talk about the need to stand with the first responders, the police officers and teachers involved in the aftermath of the school shootings, as well as the families of the shooters themselves.  As he got ready to strike the band up again and get back to the set, Foster said, “We need to pray for all of those people because God is bigger. And love is bigger.”

Almost a decade after a breakout single launched their careers, Foster the People is back with new hits (their latest single, “Sit Next to Me” has landed on charts around the world and has racked up nearly 100 million Spotify streams), as well as a renewed purpose. They aren’t just on a mission to prove they’re not just one-hit wonders. They are on a mission to change lives.  This isn’t the story of a comeback. It’s one of redemption.

In 2010, Foster the People became an international sensation when “Pumped Up Kicks” became an unexpected sleeper hit after the then-unsigned band dropped it online. The song landed them a major record deal, a Grammy nomination and ended up going multiplatinum in the U.S., Australia and Canada.

However, beyond its commercial and critical success, the song chronicling the inner thoughts of a bullied student considering committing an act of violence—also put the band in the debate about gun violence.
“It stuck us in the center of the conversation of gun reform and gun violence, isolation, teen angst and all of those things,” Foster says. “I wrote that song in response to what I saw happening back then, and I knew things were going to get worse before they got better. I never pictured, asked for or thought that I’d have a platform to speak on something like that, but it kind of naturally happened over time.”

When the band was touring their latest album Sacred Hearts Club, America would face one of the deadliest rashes of mass shootings in its history, leaving the nation stunned in the wake of horrific killing sprees in Las Vegas; Parkland, Florida; and Sutherland Springs, Texas.

With the body counts piling higher and higher, Foster found himself in a place where he needed to say something.

“I think artists have a duty to speak culturally,” he says. “I think artists throughout the history of time have always been at the forefront of social change. They’ve always been a voice … We’re [some] of the only people that don’t have to rely on a corporation or lobbyist or voters or other people that have say over our message. Our message can come purely from us. And I think there’s a huge freedom in that, but I also think there’s a responsibility in that.”

But if you hear Foster’s message, he’s not advocating for any specific policy or legislation. He’s thinking bigger than that. He wants to use his platform and his music to bring people together. “Right now, the biggest thing that I want to say is this division, at least in the U.S., is really ripping our country apart,” he explains. “And I want … to encourage people to not choose party over humanity.”

Years after “Pumped Up Kicks” launched his career, Foster believes he must use his platform—and his gift as a musician—to help people heal. Because it’s his music that has helped him find the healing he was looking for.

Like much of their catalog, Sacred Hearts Club is a dancy, upbeat album that fuses indie-pop with club-thumping beats. The single “Sit Next to Me” is a fun, top-40 hit, and tunes like “Doing It for the Money” and “Harden the Paint” work just as well on a summer drive with the windows down as they do on the dance floor.

That’s partly what makes the album’s closing track, “III,” so powerful. A departure from the pop and dance beats, it’s a dreamy, slow, synth-fueled ballad that centers around the lyric, “I want to live in your love, forever.” In a slow, haunting moment, Foster sings, “When the night will come and take us home / And people change, we fade from youth / And evolve into eternal life / Don’t slip away, well I’m begging you / To let me sing with angels.”

Foster says the idea for the song came from his bandmate Isom Innis. Innis was born with a heart defect that led him to need open-heart surgery as a newborn and again at 19. “He has a valve that he can hear clicking throughout the day,” Foster says.

It’s the kind of experience that can give someone a unique perspective on the gift of life and power of death. Foster himself hasn’t experienced any health issues at that scale, but he has had to come to terms with life and death in his own way.

When he was 18, he moved to Los Angeles to try to make it in the music industry and, like many such aspiring creatives in Hollywood, soon began to struggle with addiction issues and a party lifestyle. His churchgoing roots left far behind him in the Midwest, Foster was hanging with celebrities—some of whom were battling their own addictions. Foster even roomed with actor Brad Renfro, the former child star who succumbed to his struggle with addiction and died of a drug overdose at just 25.

The experience woke Foster up. He says that one evening, he and Innis were in the studio, and they began to work on the song that would become “III.” They started talking about these ideas—not just about life and purpose, but what comes after we die.

Artists have a duty to speak culturally … Artists throughout the history of time have always been at the forefront of social change.

“We got into this big conversation about life and death,” he says. “Not in a morbid way. But basically in a, if something were to happen to one of us, what would you want the other person to do? Like, ‘If I die first, this is what I’d want you to do.’”

Erwin McManus: Jesus Was a Genius

It was a heavy conversation. Foster says that the line “Age is a trap, I wonder why I hold back” is about the idea that “we only have a limited amount of time in life, why on Earth would we hold back because we have this gift? And we don’t know how much time we have.”

In the bridge, he sings, “I won’t be afraid, it’s true / We’ll never know when the night will come and take us home / Don’t slip away, I’m begging you.”

“That’s me talking to God,” he says. “Because I was really going through something at that moment, too. Struggling with some stuff, struggling with addiction stuff. And was just in this very honest, vulnerable conversation with God that was just like, ‘I know that we’re not close right now, but that doesn’t mean I don’t wanna be close to You. And if something were to happen and if I were to die now, I hope I’ll be able to spend the rest of my time with You. I hope that I’m not so far away that You’ll turn Your back on me.’”

“I sang that song so many times,” he remembers. “It was [me and Isom] in the studio, and it took a lot of times for me to get through that bridge vocally without crying. Because it would just stop and there would be just silence between us. And it was kind of awkward, actually, because it was so emotional and so real and I’d get choked up and stop singing and he’d stop the song. And I’d basically gather myself, he would press record and I’d try to get through it again because I really did come from a spiritual place of, I guess, the deep, deep core, like our deep core.”

The experience of writing “III,” coming to terms with big questions about God and dealing with the weight of being placed in the middle of a conversation about something as heavy as gun violence has given Foster and his band a renewed purpose. Yes, they write really catchy pop songs. But that’s not their sole mission anymore. This is about using their experiences and talents to actually change the world.

Music is this beautiful medium that has the ability to unify people … We’re in this together. We need each other.

The song “III” ends with an outro that serves as the final words on Sacred Hearts Club. As the final notes of the song ring out, Mark Foster sings, “Wake the sleeping from their dreaming … we all want more.”

The band has found success. But spiritually and missionally, they know they want more. And Foster the People is going to keep going after it. “Music is this beautiful medium that has the ability to unify people,” he says. “If I have a microphone in my hand, I can remind people, ‘Hey, we’re in this together. We need each other. Life is hard enough as is for us to be picking on each other over things that don’t really matter. If we can see beyond all of that stuff and stop fighting about stuff that’s trivial, we can put our hand out to things that are more important.’ And that all comes from, if you boil it down, it comes from a place of love and respect toward each other, so it’s gonna be pretty hard to go wrong.”

Why You Need a Spiritual Mentor