Pharrell Williams is a driven man. That’s not a surprise to anyone with even a passing familiarity with his work, but it’s true. It comes across in his music, of course, where Williams has defined a whole generation of hit-making with his trademark artistry. It comes across in his persona, where the man has become single-name synonymous with effortless style. It definitely comes across in conversation, where he demonstrates a single-minded interest in the subject at hand. And it comes across in his thoughts about faith, where he tries to articulate his perspective on something that’s hard to put into words. He calls it the Spirit.

“And that’s the same way we see the Spirit wash over people in the church when the church catches fire,” he continues. “When the Spirit just jumps out of nowhere because of something that the pastor said or a chord change or a particular part of the song, you just see it. It’s a lot like how they do the wave in stadiums and football games or whatever, but it’s not rehearsed. No one’s talking about it.”

Williams grew up in the church, coming of age in the pews of his uncle Bishop Ezekiel Williams. In the ensuing years, he became, well, he became Pharrell. Few artists have had a bigger impact on pop music. Fewer still have operated so seamlessly in so many orbits, from Snoop to Britney Spears to Daft Punk to Run the Jewels. Even if Williams had never recorded a single song, he’d still be an indispensable figure in the American pop music landscape. And this man recorded “Happy.”

Now, he’s turning his magnetic attention to reality TV, having helped produce a Netflix show set in his old Virginia Beach stomping grounds. Williams’ uncle, the bishop, has long dreamed of building the world’s greatest Gospel choir. Voices of Fire charts his journey to do just that, with his superstar nephew at his side to not only help find fresh talent but to find and tell good stories. And while the stories shared on Voices of Fire are indeed profoundly moving, Williams’ own story is pretty compelling on its own.

Williams was born in 1973, the first son of a teacher named Carolyn and a handyman named Pharaoh. He met Chad Hugo at a seventh grade band camp and the two became friends and then, eventually, collaborators. First, the two formed a short-lived rap group with their friends Tim Mosley and Melvin Barcliff, later known to fans across the world as Timbaland and Magoo. Later, Williams and Hugo partnered with Mike Etheridge and Shay Haley to create The Neptunes.

This is an astonishing array of future music gatekeepers at the very beginning of what would be long, enormously influential careers. But at this point, they were just looking to win a hometown high school talent show, and that sense of home is something Williams still holds close to his heart — in fact it was part of what drew him to the Netflix show.

“Your home is always your home,” he says. “I would say that it was an honor to do this because we want to bring as much attention and bright light back to our home as possible. And obviously, in terms of people getting closer to having a greater relationship with God and the universe, there’s no greater way to pay homage to where you’re from. All that creative juice.”

The high school talent show proved to be a fateful one. Williams and his friends were discovered by Teddy Riley, who had already made a name for himself as a producer by working alongside Quincy Jones and helping form Blackstreet. Riley thought The Neptunes were onto something and signed them, which led to Williams working in the studio with acts like Clipse, Mystikal, Jay-Z and most fatefully, Nelly. By 2003, one survey had found that about 43 percent of all songs being played on the radio at the time had been produced by Williams and Hugo. Forty-three percent.

Williams’ instinct for music flows from a passion, from seeing songs not just as a code to be hacked but the connective spiritual tissue of the universe. “That will never get old to us as a species,” he says. “Whether we are in front of it in person, or we’re watching it online, or we’re watching an old movie: When you see a group of people singing, the power of the human voice is magnified.”

“It does something to you.” 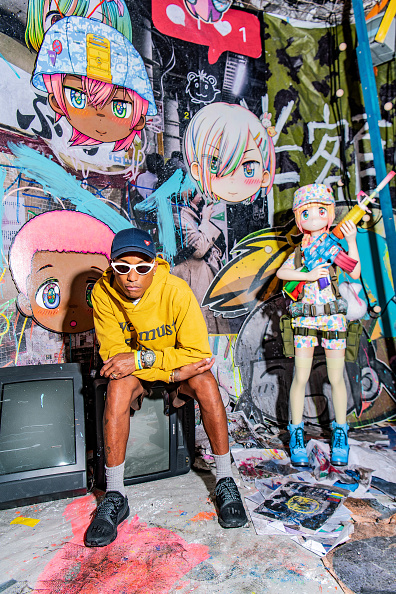 Williams’ reputation continued to rise in the mid-00s, as another flurry of singles topped the Billboard charts after being graced by his production. Gwen Stefani’s “Hollaback Girl;” and more gigs with the likes of Justin Timberlake, Jay-Z, Maroon 5 and Shakira followed. You certainly know the rest. “Get Lucky” with Daft Punk. “Drop It Like It’s Hot” with Snoop Dogg. And his own “Happy,” the irresistible feel-good anthem that became far and away the bestselling song of 2014, the year it was released. In the United Kingdom, it’s the most downloaded song of all time.

It’s that resume that has made Williams not just a superstar, but a respected voice in pop music, which is why he started making appearances on shows like The Voice, where his uncanny ear for what’s next could be seen in action. But Williams says Voices of Fire isn’t like The Voice. In fact, it’s not really like anything else out there.

“This one is specifically different because it’s enlightening,” he says. “It’s elevating. You literally are exhilarated when you’re watching. As you’re seeing yourself, there are moments that you want to be emotional and be happy. They’re the most brief moments where you’re emotional and empathetic, but it moves you. The beautiful part is that what moves you in this particular case is the Spirit.”

That’s important to Williams. It was part of what attracted him to the show — not just conveying the thrill of putting together a great gospel choir, but capturing the feeling of seeing a great gospel choir live — the way the onstage talent mingles with the intangible hum and energy in the space to create a life changing moment.

For Williams, talent isn’t just a matter of vocal cords and diaphragms. He says that when he looks for talent, he’s looking for people who can tell their stories with their talent. He readily admits that these stories aren’t always easy to hear. In fact, as he says, “as sour the situation, how sweet the berry of their voices. How sweet, right?”

“The lives that they live and the trials and tribulations that they have gone through,” he explains. “So when you hear these people sing, you feel their story. They tell you their story, but when they sing, it’s so spot on that what they’ve said that they’ve gone through, you can feel it. That, to me, is what I identify as the unicorn that makes them unique because each experience is unique.”

Williams remains driven. He enjoyed working with Voices of Fire and alongside his uncle specifically (who he says is “still in shock, he’s still in awe” over the experience) and he’s proud of what he accomplished. But moreso, he’s feeling inspired by the people he met. He’s feeling humbled too.

“Each of them have unique stories, and it’s incredibly inspiring how you see God move through them and their stories. That’s an honor,” he continues. “Their stories are so much more important than mine and who I am. I’m just a means to a much bigger end.”

This is a theme in Williams’ conversation. He doesn’t think of himself as a star, but as part of a much, literally universal tale in which he plays one part. His own story is a subplot in a much grander narrative taking place on a spiritual plane.

“I’m from Virginia and at the end of the day, Virginia is part of a nation and that nation is a part of a continent, and that continent is part of the planet, and that planet was created by the Creator,” Williams says. “What better way to say thank you to the universe?”

Do Our Bodies Matter to Our Spiritual Lives?