Taya Gaukrodger has been reading a lot of Oswald Chambers lately. The twentieth century Scottish preacher best known for his beloved devotional My Utmost For His Highest has left quite an impact on her spiritual life, and she’s effusive with her enthusiasm. Utmost has a different devotional for every day of the year, and she’s been so inspired by the day’s reading that she reads the whole thing in our interview.

“‘Are you willing to sacrifice yourself for the work of another believer?’” she asks, reading directly from the book. “‘To pour out your life sacrificially for the ministry and faith of others, or do you say, ‘God, I’m actually not willing to be poured out right now, and I don’t want you to tell me how to serve you, and I want to choose the place of my own sacrifice and I want certain people watching me to say well done’?”

“I just think that’s the most beautiful thing,” she says, looking up from the book. “I don’t want to get to heaven and go, ‘Dang it, I wish that I had trusted you so much more when it came to this, this, this.’”

It’s worth noting here that this particular interview had to be pushed back a few hours because I, the interviewer, had to run my pet terrier to an emergency veterinarian where he was diagnosed with some issue I still can’t pronounce. Gaukrodger, one of the most visible members of Hillsong United, was more than gracious with the schedule adjustment: she was genuinely interested. She prayed for the dog and asked to be kept informed about future updates so that she could keep praying (he has had a full recovery). And she also spent an enormous amount of our Zoom call using her latest spiritual insights to encourage me, her interviewer.

“Even when you’re faced with insurmountable grief,” she says. “Even when it doesn’t look the way that we think. Even when it’s not pleasant, even when it seems like your whole business is gone out. Are we going to get to heaven and go, ‘I was faithful with what you gave me, even when I couldn’t see’?”

Pandemic season has led to some downtime for the members of Hillsong United, who are the biggest worship band on the planet by any measure. But it has not slammed on the breaks. There is still The People Tour, the live recording of a sold out Madison Square Garden concert. There’s the concert film, which they dropped for free on YouTube and which you can (and should) watch embedded in this very article.

But whatever the hiccups this season has thrown at Hillsong United’s trajectory, COVID has decidedly not changed her attitude. “One of my top strengths, actually the top strength, is positivity on the Gallup Strengthsfinder,” Gaukrodger says, and it shows. She’s an incurable optimist with a laser focus on what God is doing and how she can be a part of it. She loves the band. She loves Hillsong, the church she’s been a part of since 2010. She loves that gets a frontrow seat to the work of God in the world, and staying humble in the face of it all seems to be second nature.

“It says in the Bible that He uses the foolish things of the world to confound the wise,” she says, shrugging.
“I mean, He uses me.” 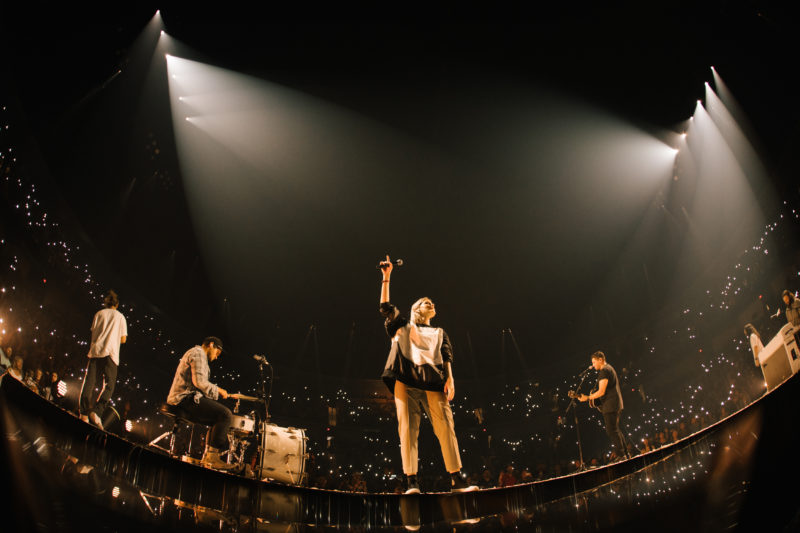 Online and On Fire

Like most people, Gaukrodger has spent the last year going to church online. She’s frank about the challenges but focuses almost entirely on the good that’s come out of it, such as the internet’s global reach expanding the number of people who can be part of a Hillsong service on Sunday morning.

She’s riding high off of a recent Sunday when a newcomer used the church service livestream chat feature to reach out. “He starts to go, ‘Well, actually, I don’t even know truly if my life is right with Jesus, at this current moment,’” she says. “Then we started having this conversation, like, ‘Bro, I believe this is your moment.’ It was the most beautiful thing.”

Brian Houston, the pastor of Hillsong Church, ends every online service with an invitation for anyone who has not yet become a Christian to do so. The person in question, who she calls “J,” prayed along with Houston and became a Christian. It’s not an uncommon story for a Hillsong service, but this one stuck with Gaukrodger. Something about the simplicity and sincerity of the moment made a unique impact.

“It reminded me again, this is why we do what we do,” she says. “For people to meet Jesus, for people to go from death to life. I feel like I’ve had to fight to keep the right heart. The main thing right at the forefront: we do this to connect people to Jesus. It’s the most beautiful and powerful thing.”

She lives for these moments, it’s clear, and her work with Hillsong United gives her the opportunity to be part of a lot of them. This is a band, after all, that travels the world, giving huge audiences the opportunity to meet with God almost every night. They played packed out arenas before COVID and, in all likelihood, will do so after as well. “Oceans (Where Feet May Fail)” just might be the band’s defining song, and that’s her voice singing it. Nevertheless, while all members of the band acknowledge the inherent tension of being both very famous and very much a worship leader, it seems to hit Gaukrodger particularly hard.

She’s comfortable with the role and doesn’t feel too stressed about striking that balance, explaining that “I know who I am and I know who I’m not, and I know that God can’t bless who you’re not.” But she’s also in no hurry to get back to the “normal,” pre-COVID life.

“To be honest, this whole time, I have not missed touring at all.”

Like the rest of the band, Gaukrodger is adamant about putting her personal life before the band. “We say that home is the prize,” she says. “If home’s strong, we can go out.”

She married her husband Ben in 2018 and that relationship has been a counterweight to life on the road. She says that he’s “probably the person who I look up to the most, in terms of his relationship with Jesus” and gushes over his studious reading habits and robust prayer life.

“We watched the whole thing, and he was like, ‘This is actually amazing,’” she says. “It’s the only time that I actually fully missed it too.”

Her eyes get a little far away as she starts reminiscing about the viewing experience.

“I could just see the sea of people,” she says. “We got to meet people like we never have before and even pray with people and hear what people are expecting. They were just coming desperate.”

And then her eyes get a little glassy.

“I was just like, ‘Oh!’” she says, looking genuinely shocked. “‘Jesus loves people! How good is it to worship God? Jesus inhabits our praises! What is that?”

“It made me just love it all the more,” she continues, after a brief pause. “As in, ‘can’t wait, when we all get back together and we do travel the world at some point.’”

In the meantime, the live concert footage will suffice.

Gaukrodger had been to shows at Madison Square Gardens before she took the stage for her and the rest of the band’s own sold out show there, a fact which still strikes her as a little surreal. “We’re a church,” she says. “No one would have thought that something like this was even possible. It’s an iconic venue.”

She describes rehearsing the show before the doors open with her bandmates, seeing the awestruck looks in their eyes. “They were very soft, and a little emotional,” she says. “It was just, how are we allowed to do this?”

“We don’t ever do this for any of that,” she stresses. “You don’t take that to heaven, but it’s just like …the kindness of God.”

Here again, she unleashes a stream of scripture and biblical parallels. “He has overcome the world, and what does that mean? That we could have peace in the midst of turmoil,” she says, before paraphrasing the story of the wise man who built his house upon the rock and the foolish man who built his on the sand. “The Bible doesn’t say ‘nothing is going to come to see what your foundations are made of.’ It doesn’t say, “Build that, and then just sunshine, for the rest of your days.’”

She says this over Zoom, in the midst of a pandemic that has taken a lot from her life and plans. It has also, you’ll recall, been a stressful day for me, and having someone say something like this is doing a lot of good. That’s what worship does, whether it’s the sort of music Hillsong creates or just a simple reminder of what’s true. It puts things in perspective.

“It’s just amazingly timely,” she says. “How important worship is, my gosh. Worship is the greatest reminder of what actually matters. As soon as we sing praises and as soon as we sing anything to God to glorify Him, He comes and He’s there. As soon as we worship, our eyes go off ourselves. We’re looking at Him. Like…” and here she starts to hum a classic worship song, and it’s the last devotional she offers on the call. “Turn your eyes upon Jesus. Look full in his wonderful face, and all the things of earth with grow strangely dim in light of His glory and grace.”

LaKeith Stanfield Is Ready to Make You Uncomfortable