I was touched in places that shouldn’t be touched. I was 10 years old.

My mother was a single parent, and she worked in a Chinese restaurant, throwing a wok over flames to fill orders. She worked past midnight, so she had me stay at another family’s house until she closed shop.

They were an older couple with five children. One was a teenage boy. I’d sleep on the top bunk in his room. One night, as I was lying there, I felt his hand slip under the covers, touching me in places he shouldn’t.

I said, “Stop it.” I tried to push his hand away. But his fingers pressed down on me. Digging into my bone. He was hurting me.

I tried to break out of his grip. But I felt like a fish flapping its fins in vain on butcher paper against the force of his strength. I started to cry. But he said, “Ssh … you’ll wake everyone up. Quiet.”

Whenever I talk about this chapter of my book, Finding Spiritual Whitespace, everyone gets very quiet. Sometimes, I ask, “Does any of this resonate with you?” Usually, no one looks at me, moves, or even breathes.

Then, I decided to change the wording. I began to ask women if they had ever experienced “inappropriate sexual advances” or been exposed to anything “sexually inappropriate” as a child.

It shocked me to find almost every woman has experienced something, but minimized their experiences—and I was shocked to find they had never been asked this question at church.

So, why don’t we talk about sexual abuse?

We’re afraid the past will define us. But hiding isn’t overcoming the past. We incorrectly view faith as an eraser, rather than giving Jesus artistic license over every chapter of our lives.

The truth? The parts of me I usually like to hide are the very parts where God is working through me and my story.

Jesus says, “For you are my work of art  [translated as workmanship], created in me to do good works” (Ephesians 2:10).

We Think We Should Keep “Bad” Things in the Past

The Bible does reference “forgetting what is behind and straining toward what is ahead,” but Philippians 3:13 isn’t asking us to forget the past. The Apostle Paul was talking about leaving his performance-oriented life, hiding behind outward works of spirituality that was void of an honest, intimate relationship with Jesus.

The truth? We can embrace the beautiful, real stories we are living, instead of hiding behind emotionally-disconnected stories we think we ought to be living.

Jesus takes bad experiences that break us and makes them beautiful, because He calls us His. He invites us to step out and offer an authentic voice.

But we have this treasure in jars of clay, to show that the surpassing power belongs to God and not to us” (2 Corinthians 4:7, 12).

We Minimize What Actually Happened

We often only define sexual abuse as rape or intercourse. There can be stigma identifying ourselves as victims, and we don’t want that label. So we don’t say anything.

The truth? The effects of sexual trauma aren’t always just about what happened to us—but how it made us feel about ourselves, and the isolating feelings that become our emotional secrets. From God and each other.

The definitions of sexual abuse apply to both men and women.

The numbers tell us one-in-four women and one-in-six men experience sexual trauma by the time they turn 18, but even this statistic is from the ’90s. Current research estimate higher numbers due to unreported cases, especially among men.

Just as Adam and Eve walked around with nothing to hide in the perfection of the Garden, we were created to be fully known and loved. Sometimes fear of being judged and guilt expresses itself in other, more seemingly socially acceptable ways—like people-pleasing, becoming uber-busy or overly goal-oriented to avoid certain feelings. But, if we neglect our inner lives, we can become soul-weary and exhausted.

There’s freedom and healing in being able to share our stories—even stories that are difficult. Churches should be places that foster this kind of openness, not places of judgment that make victims feel like they can’t be vulnerable and honest about their pasts.

Let the beloved of the Lord rest secure in him, for he shields him all day long … [resting] between his shoulders (Deuteronomy 33:12).

Part of being God’s beloved is the peace of knowing that we can be fully known.

There is no condemnation in Christ (Romans 8:1).

We share our stories because they are true. Church culture in America has become a place of theological discourse, yet, in the early days, the apostles were adding to their numbers, by sharing whatever was needed.

They gave each other belongings, shelter and food to sustain them. I believe today, what many of us desperately need, but have neglected to share because we’re afraid to risk, give away or even receiving judgement is this: Our stories. This is what churches should foster.

Because when we share our authentic, unedited stories, we offer ourselves: true belonging, shelter and food for the soul.

The Adverse Childhood Experiences (ACE) study found our experiences of childhood trauma affects health and well-being later in life. We can help each other by sharing our stories, and seeking care and healing together.

We become the living Gospel.

All the believers were one in heart and mind. No one claimed that any of their possessions was their own, but they shared everything they had … And God’s grace was powerfully at work in them (Acts 4:32).

Maybe this world would become a more beautiful place if we didn’t have to feel pressure to seem unbroken. Maybe we would all become known: Be willing to listen. Step closer and share your story—or that of your mother, father, sister, brother or friend.

Because the truth is: We’re all broken-made-beautiful. Because we’re loved by God. As is.

It’s not always easy. But, sometimes the harder stories are the ones worth telling.

“You are a letter of Christ … written not with ink, but with the Spirit of the living God, not on tablets of stone, but on tablet of human hearts” (2 Corinthians 3:3).

is author of the 40day soul detox Whispers of Rest and Finding Spiritual Whitespace. An inspirational speaker and retreat leader, she has touched thousands of lives through storytelling, visual arts, nature, prayer and meditation. Bonnie’s writing is featured on Klove, Christianity Today and Catalyst Leadership. She lives in California with her husband and their two sons. 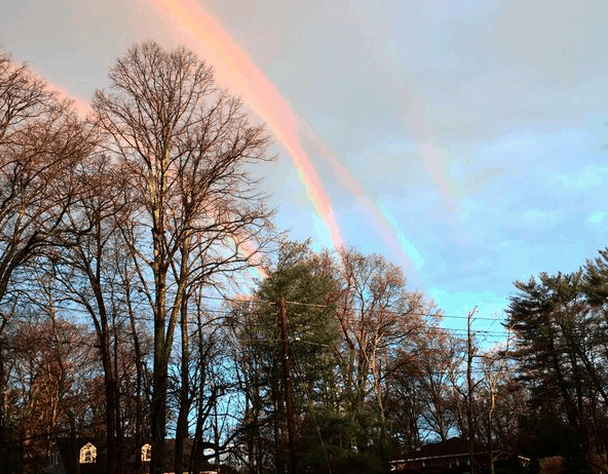 Quadruple Rainbow Caught on Film. What Does It Mean?!