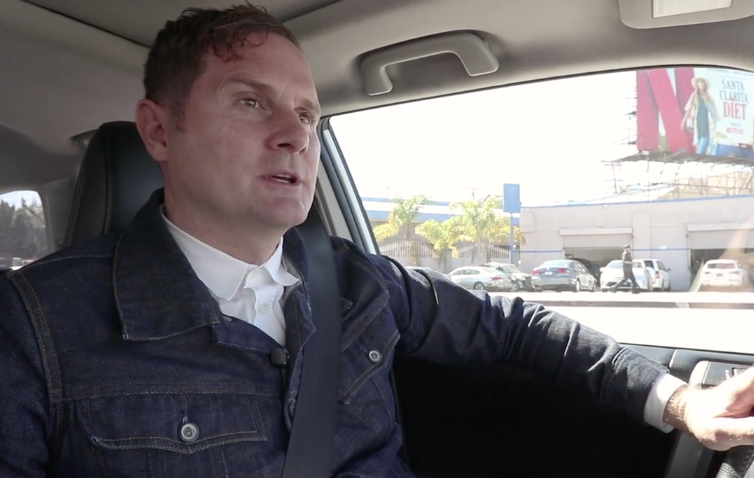 Last night, the highly anticipated premiere of The Rob Bell Show aired on OWN (Oprah Winfrey’s network), and audiences, fans and critics finally got a chance to see what Bell’s collaboration with Winfrey would look like.

And, perhaps unsurprisingly, Bell sounded a lot like a pastor.

For those familiar with Bell, the show came loaded with pretext and reasons to be curious about his message: Bell was once a wildly popular pastor and author in the evangelical community. But, after the release of his book Love Wins—which asked big questions about the Bible’s teaching on hell and seemingly suggested that current understandings of eternal punishment may be wrong—he became one of the most polarizing pastors in Christian culture. The controversy eventually led him to leave his Michigan church and move to California to pursue a career in television.

Many evangelical leaders publically distanced themselves from him (John Piper famously tweeted “Farewell, Rob Bell”), and Bell was even labeled a heretic in some Christian circles. But, it wasn’t long before the former pastor found a new audience: fans of Oprah. The talk show queen made him a guest on her Super Soul Sunday program, and he became a featured speaker on her national Life You Want tour. Many of his critics pointed to the alliance with Oprah—who is know for her alignment with a variety of self-help teachers and New Age-y speakers—as even more evidence of Bell’s apparent drifting from his Biblically conservative roots.

But, up until last night, the criticism was leveled without anyone actually having seen the show he was working with her network to create.

Finally, last night, audiences got a chance to see what this show—a prime-time, hour-long block on Oprah’s network—was all about: And it sounded a lot like a Sunday morning sermon.

The theme of the first episode was Colossians 1:20 (which was shown and read aloud), particularly the idea of “the reconciliation of all things.” Bell used whiteboards and pre-taped videos to teach a lesson to a live studio audience about how the idea applies to individuals’ own painful pasts.

A few minutes into the show, Bell interviewed two individuals who used tragedies in their pasts to actually become better people and to help others, as a way of bringing home the idea of “owning” our pasts—mistakes and pain included. The first third of the show was pretty standard, self-help-y advice, with nothing overly controversial. But, if you’ve read any of Bell’s best-selling books or watched any of his past teachings, what he did next may be familiar.

Instead of using the testimonies and idea of “owning” your past as the foundation for a self-therapy session, Bell transitioned. The first segment of the show was revealed to actually point to a much bigger idea: the cross.

During the second segment, Bell dug further into his illustration by discussing the cross of Jesus Christ, and why it is the ultimate metaphor for the “reconciliation of all things.” His message was simple: The cross is such a culturally enduring symbol because it is a representation of what God did for us in order for people to be able to be reconciled to His perfect love:

The first people who wrote about it said, ‘This cross is a sign and a symbol.’ It is a living breathing demonstration of God reconciling to God’s self, all things. The story is about somebody who endures the worst that a human being can endure and that pain and suffering becomes the channel through which God’s healing love flows to all of humanity.

Frankly, it didn’t sound like the words of a heretic. Sure, it may be easy to pick apart every word he said or discuss the deeper Biblical concepts he choose not to talk about, but for a prime-time talk show not on a religious TV network, it was as close to a Sunday morning sermon as you’ll hear.

Critics may point to the fact that beyond discussing how the cross was God showing how he longs to be reconciled with us—healing the pain and hurts of our pasts—parts of the show were theologically light. Other elements of the Gospel narrative were absent (there was little talk of sin, prayer, the idea of salvation or hell). But, after watching the entire episode, you got the impression that it wasn’t meant to be an all-encompassing teaching on Christian theology. It was meant to be an entry point into the Gospel that left viewers wanting to know and seek more about Christ, by framing His sacrifice in a way that they may not have thought about before.

Toward the end of the show, during a Q&A session, Bell addressed how he dealt with his own critics, and how he’s “owned” his past. He also hinted that the show isn’t really meant for his Christian critics—it’s meant for people seeking answers. His job is to point them to Christ.

A member of the audience asked what it was like to be labeled a heretic by fellow Christians following the release of Love Wins. “How did I deal with the Love Wins controversy? There was a controversy?!” he joked. “No. 1: Don’t Google your name.”

Though his answer hinted that the criticism from his own community did sting, he suggested that the people who were his critics then probably weren’t among his intended audience anyways:

To be honest with you, writing a book, that apparently not everybody liked, called Love Wins, and apparently some of the people that didn’t like it actually read it […] It produced a nuclear joy in me […] Here’s the thing about criticism. First off, you have to know what you’re doing […] A lot of criticism is people, they are angry that you broke the rules of golf, but you play tennis. Like, I’m not trying to do that. So, you being upset, apparently it wasn’t for you.

Fittingly, after his teaching and a Q&A, the show ended—like many Sunday morning services—with a benediction, closing with the following words, “May the grace and peace of God be with you.”

If you could somehow watch the first episode in a vacuum—without any knowledge of Bell’s past writings, theological questions or critics—you might assume that the host was a conventional pastor attempting to bring Bible teachings to a prime-time audience in a relatable way.

Like many big-name teachers of the Bible, Bell’s words will constantly be scrutinized. But now that he is the host of a TV show—not the pastor of a church—that fact doesn’t seem to bother him. The Rob Bell Show wasn’t made to answer his critics—its premiere episode was tailored to point hurting people in the direction of the cross.

The Uneven Inspiration of ‘Unbroken’