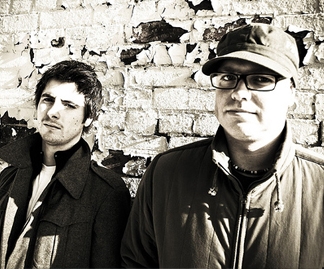 It was during the film Friday Night Lights—or at least the theme music. In that moment, the
door opened for Barry Mielke to the world of post-rock
via the beautiful builds and swells of Explosions in the Sky. Since
then, Mielke and band mate Darryl Silvestri have slowly been developing
their sound and audience for Driving on City Sidewalks. With a label
home in tact and their first documentary score behind them, it seems
the platform only gets larger from here for the Michigan-based band.

RELEVANT recently caught up with Mielke to discuss the band’s beginnings and
future—and how exactly you convey a message without any lyrics.

I guess a proper place to start is with the moniker. Where did Driving on City Sidewalks come from?

A long time ago, Darryl and I were playing with some other
friends of ours before taking a huge break. I’m driving back in my
town, which is very small, and it was late at night. I saw these signs
driving in that said, "No parking on city streets" and I don’t know if
I was tired or not, but I had this thought of "If you can’t park on the
street, I wonder if you could drive on the sidewalks." Then I thought, "Driving on City Sidewalks. Yeah, if I’m ever in a band …"

Then
when I started recording stuff and putting it up on the MySpace page,
instead of calling myself Barry Mielke, which seems rather boring, I
just called myself that. And it’s been the same ever since.

What is it about the instrumental side of things that draws you? What is the power behind that for you?

Even as a kid, if there was a cool melody on the radio, it was never
just that. It was never just music. There was Stevie Wonder or another
big pop band at the time and I remember wondering why they would add
that. I wondered why the only instrumental music I heard was classical
music. Then when I saw the movie Friday Nights Lights and heard the
theme from Explosions in the Sky, it just brought everything back to
that. When I heard that, it just made sense. I just thought, "You
totally don’t need the music to convey a message." So, while I do have
the odd lyric here and there, I really don’t want to rely on lyrics to
bring the message home. I just like the fact that I can convey
something through only music.

Have you learned any lessons about conveying a message musically?

I don’t know. I played a lot in worship bands and stuff growing up. I
hope it doesn’t sound egotistical or pompous to say this in any way,
but I realized that what I did on the drums would really convey emotion
to people. If I built a part up before a chorus and let everything die
down after that, people were really receptive to that. I think how you
can convey those kind of things without lyrics … dynamics play such a
huge part. Even if you don’t continue the build and drop things off, and
all that’s left is a subtle melody of a couple notes that ring out,
that still works.

When you use words so sparingly, how do you decide when you actually place them in?

That’s a good question. There’s something I’m working on now and it’s
for my mom. The melody is very simple and only has three or four lines.
My mom has multiple sclerosis and it affects the nervous system. There
are four lines that convey something to me and her that nobody else
could understand. So, instead of going through this huge story of how I
felt when I was 16 years old and she got diagnosed, and then how I felt
at 31 when she had a huge attack again, I’m just using four lines that
capture the last 15 or 16 years of my mom with this disease. I didn’t
have to take all that time to tell the entire story. That’s all I need
to convey the emotions and passion that I have and the struggle of this
disease.

To use words sparingly almost drives it home more.
If I’m listening to a song that’s largely instrumental and then all of
a sudden, there are three or four lines, it almost makes you pay
attention to those few lines and have them really take hold.

So what kind of momentum are you enjoying right now?

Things are going pretty good. With Count Your Lucky Stars Records, they
have a PR guy and he’s been putting out press and he emails me every
time the CD gets reviewed. So, some of that is really good and probably
an equal amount is not good. [Laughs] But honestly, it impacts me for a
little bit and then I realize that it’s not my full-time job. It’s
always been a hobby for me, even as a teenager. Now that I’m putting
stuff out with Darryl and we’re in a band and we’re putting our art out
there in public, that opens us up to be reviewed. That’s cool with me
overall.

It is still a little surreal that any of this is
happening. After all I’m just a guy that likes music. I’m thanking God
for all of this. Even the bad reviews I’m loving in a way—it’s just
funny how the bad reviews have changed my outlook on other people’s
work. Before, I had a pretty cut and dry sense of what I liked and felt
free to offer those opinions out. Now, I see other artists as
individuals with different styles, life circumstances, etc. And I think
to myself, "How could I possibly offer my opinion up, good or bad, when I
have no idea where they are coming from?" I am much less negative when
it comes to other bands and genres of music now. Obviously they liked
what they created, so why do I think I can just critique their
creativity? The very gift God gave to every single one of us?

The
momentum doesn’t have to come from peers or other people. If I’m
sitting in my budget studio in my basement and I like what’s coming
out, then that’s all the momentum I need to keep it going. It’s cool to
be able to play music for myself and then have others come along. Maybe
they like it and maybe they don’t, but that’s their opinion. It’s all
good. Things are going pretty good and I’m happy with everything right
now actually.

I know that Explosions in the Sky is
the obvious influence for beginning this whole venture, but is that the
best point of reference musically?

I don’t know. I’ve
been listening to Explosions quite a bit again. Definitely, they are a
guitar-driven instrumental band and the similarity is definitely there.
But some of the newer stuff that’s getting created, I’m almost afraid
to say it, but it has a Pedro the Lion kind of tinge to it—the early,
early stuff. It’s in the way that the guitar parts are driven. I’m
obviously not trying to rip it off, but it’s just got that feel. It’s
hard because you send something to friends and they will then reference
what it reminds them of, like twothirtyeight or Pedro the Lion.

So,
Explosions is a big influence. Moving Mountains is huge and I love the
way they approach things. I wouldn’t say what we’re putting out
directly sounds like it. But it is the vein that we’re in for sure.

So, what’s happening next for the band?

Well, I found a drummer to come in and play for us. Then I have a bass
player who I believe will commit. Basically, it’s about playing and
practicing and getting ready to play shows, even if it’s just five or
six songs while opening for another band. That would definitely be the
highlight right now—playing this stuff live. There’s a lot of
material out there that we could put a full-length out this fall or
winter or even early 2010. A full-length is in the works since I’m
working on a lot of stuff now. Some of the stuff I did for the
documentary, I could also see that released on a full-length.

How the iPod is Hurting Music

The Task of Teaching