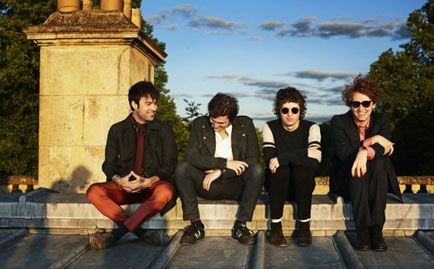 Very few indie-rock bands will claim their music as "pop," no matter how upbeat and popular it may be. But The Kooks have spent the last five years proudly producing sunny Brit-rock with a distinct retro bent. Their third album, Junk of the Heart, came out last week and is yet another collection of polished, catchy tunes. RELEVANT recently sat down with lead guitarist, Hugh Harris, to talk about their new album, their international audience and the youth culture of England.

Your new album is particularly upbeat. Why did you want to embrace this happy, pop vibe?

Well, I guess it’s instilled in us—we’re all from Brighton. It’s a bit of a micro-climate down there; it gets the best weather. Music kind of goes hand-in-hand with the weather, I think. It can extremely change your emotion quite instantly, so I guess we’re kind of affected by that. I mean, we wanted to make another album that was pure and bright, and sort of forget our worries. That’s why we went to [Los Angeles]; it’s quite an escapist sort of place. I think a lot of people go there because it’s quite a dreamy place. We recorded at Sound Factory in L.A.—it’s an exciting place for us to be, we’d never recorded out of England.

Do you feel like you’ve found your niche as a band?

I don’t know. I don’t know that you ever find your niche, really. I think you spend your whole life looking for it and you maybe once come close to that. We just want to polish things up a bit and embrace a lot of the new ways of recording as opposed to just catching a live band in a room. We wanted to do things differently. Most bands these days lay down drums and then stick things on top. We were kind of snobbishly purist about recording previously where we wanted to just capture a moment. We knew we needed to turn things on its head with the way we were recording, and I think we achieved it.

Is there any reason it’s taken longer for you to finish this album?

I think to truly adapt and change, you need time to do that, otherwise it’s forced. We wanted to make—there’s two ways of doing it. We’d write songs in the studio as a band and then slap a load of synthesizers on it, and I think that would have been the wrong way to go about. That’s not the way to get the DNA of the song embedded, in the computer world. It always starts with an acoustic guitar, Luke’s songs, normally. They will quite often be a drum loop that will instigate the direction of the song, rather than a guitar riff. We sort of went from looking at guitars and looking at others places, and a lot of bands are doing that. There’s Foster the People, and they’re making clean, pop-sounding, bright, Rihanna kind of deliciousness—but with incredible heart and soul, and a really good, decent song. We kind of opened ourselves up to what was around us.

What influences do you go to in developing your signature twist on the British Invasion style?

You’d get a different answer from all four of us, I’d imagine. I’ve been doing quite a bit of working string arrangements, and that’s a new outlet and something that’s really turned me on; diving into that world, which is such an untouchable world. Strings have been around, and it pretty much has been in music. Modern music is a very young genre as opposed to hundreds of years of symphony, so it’s nice to pay attention to that and respect the youth of young music. I guess influences—I listen to a lot of early Simon and Garfunkel. The original idea was to make a clash between Simon and Garfunkel and Gnarls Barkley, sort of mixing true songs with modern things.

You’ve managed to have big commercial success while maintaining indie credibility in the States. What do you think is the key to earning critical success and entertaining fans?

I think in America, both things go quite happily hand in hand. American critics are quite sensitive to public demand and represent the masses in a way. In England it’s quite the opposite; quite often a critic will hate something or love something just to go against the grain and sound like they know what they’re talking about. You don’t really think about things like that, the thoughts don’t really extend to that level.

Do you see any major differences between your American fans and your British fans?

I’d like to say yes, and I’d like to point out the intricate details of the kids who come to our gigs and want to have fun, but it really is quite straight-forward, and that’s the beauty of music: it unites differently minded people, it’s a global thing. Kids who come to our gigs in America and in England just want to lose themselves and have a bit of fun. Our fan base seems quite diverse, which is really cool.

Recently, the area you live in was in the spotlight with the London riots. It’s difficult for us to understand what it’s like, but as an artist who lives there, can you give us some insight into those events and the youth culture there?

I think for a lot of people it was a real shock. There’s a whole unidentified group of kids who aren’t recognized properly and aren’t given a voice—whether they deserve it or not is not really the point. There’s a lot of really angry kids who don’t really know what they’re doing. It’s like Canada recently with the hockey riots. Such a peaceful country, but that is only the public facade; there’s always a dark underbelly to everything—look at Norway. Here, it was a shock, but it’s been a long time coming. It’s really tense, really horrible to see, because there’s no political motive to it. It’s difficult to explain. It’s hard to go, "It’s because of this, so we need to do A, B and C to fix it." The fact that it didn’t have a cause is even more harrowing in a way because then you don’t know how to fix it. But we’ll get by, we’ll be fine, it was just quite a tense moment.

Listen to the interview on the RELEVANT podcast.