The apartment across from ours has been decorated with cobwebs, skulls and tombstones since late September. The skulls are cartoonish and exaggerated, the better to gloss over the fact that a skull is a head stripped of its flesh, muscle tissue, teeth and eyes, not to mention the body it once a belonged to. It’s a symbol for death, and we’d prefer to leave it at that, thank you very much. Death is much more manageable when confined to the realm of semiotics.

Because we’ve forsaken psychology for blood and guts, almost no one today would look at Ingmar Bergman’s The Seventh Seal (1957) and say, “Now there’s a horror film.” But I would argue that such a classification fits Bergman’s film, precisely because its horror is psychological and universal. In fact, the subject is nothing less than death and the loss of faith.

Max von Sydow, who more people will know from William Friedkin’s The Exorcist than from his many films with Bergman, plays Antonius Block, a knight who’s just returned from the crusades to his homeland of Sweden. But if he was expecting to find peace waiting for him, he’s soon disappointed when death literally comes for him, dressed in a long black cloak, a confident smirk on his pale face. Antonius tries to stall for time—and you can’t blame him—not, he insists, because he’s afraid to die, but because he’s in the midst of a crisis of faith and wants to know beyond a shadow of a doubt that God is real before passing on.

If that weren’t enough, another problem is plaguing Sweden—namely, the plague. Wherever Antonius and his squire, Jöns, travel, they find death and suffering. Some believe the plague has been sent by God and have taken to whipping themselves in the hope that He will see their desperation, hear their ragged cries and heal the land. Others believe the plague is evidence that God has never existed at all, proof that life is meaningless.

Antonius is caught between these two very different views, desperate to believe but unable to, and his questions are unmistakably Bergman’s, who grew up in a strict religious home and eventually rebelled against his upbringing. Remarkably, though, he had a difficult time dropping the important questions, such as, who are we? Why are we here? Is there a God? Does life have any meaning?

As Christians we can and should come to different conclusions than Bergman does, but that doesn’t diminish the importance of his work. In The Seventh Seal, Bergman confronts universal questions and pursues them to their end, even when that pursuit carries him into dark corners of the human heart.

After all, how many of us can really say we’ve examined our own lives with this same kind of intensity? How many of us have been willing to ask the difficult and potentially faith-wrecking questions that Bergman asks here? For those who have, what they’ve encountered was likely a terror far more frightening than any masked boogeyman. To look meaninglessness in the face is to stand on the edge of the precipice, ready to jump, and say, “Give me one good reason why I shouldn’t.”

Not all of Bergman’s characters give in to despair, though, which is another reason why The Seventh Seal should matter to us. Bergman contrasts Antonius with Jof (Nils Poppe) and his wife, Mia (Bibi Andersson), a pair of traveling performers for whom life still bears more than a trace amount of beauty. Their pride and joy is their son, Mikael, who has yet to say his first word or take his first steps. His whole life is before him and, God willing, he will have a better life than either of his parents have had.

Jof, Mia and Mikael, then, are the lone picture of a simple, genuine faith, one that wins out against despair and alienation. But can we truly say that Bergman is using them to denounce skepticism and embrace the Light? If we look at The Seventh Seal in context with his other films, I don’t think we can make such a bold claim. More than the family’s religious beliefs, Bergman wants to draw our attention to their way of living—their humility and devotion to love, self-sacrifice and all the humanist qualities Christ would have us aspire to. I don’t mean humanist in a secular sense here (although I imagine that’s what Bergman was going for) but humanist in a life-affirming, image-of-God sense. These are the qualities with which God can make His grace known to the world and to us, and they are precisely the evidence Antonius was looking for, if only he’d had the eyes to see. They are the qualities that, in the face of death, can give us the courage to face life’s true horrors and ask ourselves the serious questions.

Andrew Welch lives in Denton. He is a film critic for RELEVANT magazine and has also written for Books & Culture and Art House Dallas. You can follow him on Twitter, and you can visit his blog. 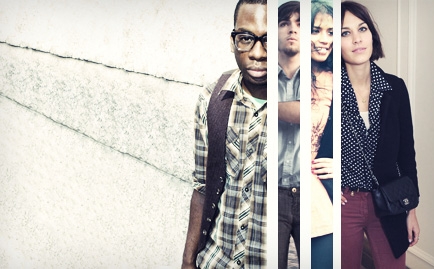 Confessions of Our Generation