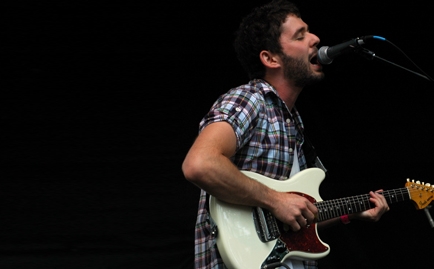 The Antlers have come out of that hotbed of indie-rock, Brooklyn. And they’ve hit the scene in a big way with their latest album, Hospice. Riding waves of praise from NPR, Paste and Pitchfork, they sold out their original, independent release and then got a distribution deal with Frenchkiss records. Now people are beginning to discover this band and their remarkable album that traces the literal death of a relationship as one character is dying from a terminal illness in front of the other’s eyes. Hospice is depressing, elegaic and beautiful, and certainly on a shortlist for "album of the year" accolades. RELEVANT recently had a chance to talk to the band on their summer tour, talking to them about touring, recording and Sylvia Plath.

How does the songwriting process work? Your MySpace mentions Raymond Carver and Sylvia Plath. Tell me about who influences you and why?

You know, as far as that goes, I’d [Peter] say Sylvia Plath not so much her literary influence but her life, her story, her rise and demise. Raymond Carver is definitely my favorite author because he has a very sparse writing style, a weird, kind of dysfunctional relationship with people—he can’t communicate. Leonard Michaels is kind of similar but a little more bizarre, a little more full of really insane people. It just really kind of blew my mind a little bit. I read a novella he wrote called Sylvia that I read right around the time I started this record, and it all sort of lined up.

Are there other people you enjoy reading or who have influenced you?

Yeah, I [Peter] mean I took a break when I was finishing up school, I was only reading poli-sci stuff and it was really boring, and I didn’t really get a chance to read a lot of things for fun. I really liked Zen and the Art of Motorcycle Maintenance, it was big—I was really into that for a while.

How did the band come together?

Peter was doing primarily solo stuff, singer-songwriter. He decided to move to a bigger sound, I [Michael] was sort of a fan, I had checked out his music on MySpace and I got in touch with him. We brought Darby in through a former member of the band, brought him in and as we started playing more of the material for Hospice, we kind of figured out that it worked better as a trio, we had more freedom and it got more expansive. The less people we have in the band—we had four or five members at one time — the bigger the sound got, ironically, because we could all do bigger and better things.

What’s ahead for you guys, are you working on another album?

We’re starting to think about it, figuring out a direction. We have a starting point and want to go from there, kind of develop the mood and concept.

How does it work to come up for a concept for an album?

Just sort of wait for it. This next record may or may not be a concept record the way the last one was. We’ve been so busy lately we’ve just been traveling and playing a lot of shows so we haven’t really had time to advance the ideas yet, but we’re excited about it.

What happens when you’re putting together an album, do you back off from everything to think about it, or put it together while traveling?

We’ve had a lot of time sitting in a van recently, and that’s kind of a good time to think about these things. It’s weird, there’s not necessarily downtime on a tour but there’s a lot of time where you’re just sort of staring out a window or staring at nothing, and you just have time to think. And when you’re home, things are still going kind of crazily when you’re still sort of processing everything that’s happened and everything that’s going to happen. There hasn’t been a lot of time to record what we’ve been thinking about.

One of the things that happens when you’re sitting in the van for a long time and then you fall asleep, and you wake up and you’re in some crazy location and you’re half asleep, and things seem really surreal and kind of dreamlike, you get a lot of ideas. The world sort of comes into focus. I think the last trip a lot of things came up for us, a lot of ideas, a lot of circumstances … there was just a lot of stuff going on. So there was a lot of potential, fertile ground there.

Is being in a band what you had pictured it would be? What’s different?

It’s pretty surreal. I’ve played in other bands before but this band I really love playing because I think we get along well as people, musically, I think we share a lot of ideas, we like a lot of the same music, and it’s kind of sort of a dream come true, this band.

It’s been this weird sort of organic development. When I (Darby) joined the band I was just playing trumpet on a few songs, and it sort of developed and I grew into it, mostly. Now it feels like … it feels really right, at this point. Like developing how it should be.

Peter, you write some nonfiction as well?

Just started doing that like a couple weeks ago, a friend of mine asked me to write a tour journal the last tour we were on for a literary magazine online. I haven’t really done that in a long time — any kind of writing. The last time I did that was probably high school. The first time I started writing, it was very bad. It was kind of like “how I spent my summer vacation.” I just scrapped the whole thing and rewrote, and sort of figured out how to write, a little bit. I spent a lot of the time between the last tour and this tour doing that. I’m working on another thing right now. It’s related to the record, kind of a wrapping up of the record.

How is that kind of writing related to songwriting?

It’s kind of lyrical writing, even if it’s kind of like non-fiction, but I’m not quite sure yet. I always thought that I couldn’t write in that way, because it really needs to be very coherent, very understandable and I suddenly just decided that I wasn’t going to do that, I wasn’t going to make it completely obvious. I was just going to try and have fun with it. We’ll see — I don’t know how it’s going to turn out.

What are some of the most challenging things you’ve dealt with over the past year?

It’s been like a big change in a very short period of time. Getting used to that … as a band. The kind of audience we’re playing to. It’s not bad, it’s really wonderful but it’s a big adjustment, getting adjusted to very surreal things. Being on the road for more time than we’re home. It’s been weird. I (Darby) live alone, Mike lives alone so it’s all of the sudden being around people 24/7. It’s great, but I’m not used to it. It’s a welcome change. It’s challenging going from being a band where you’re playing music and you don’t get that much attention to having to navigate through the industry or whatever, it’s an adjustment. But I’d rather be doing this than anything else.