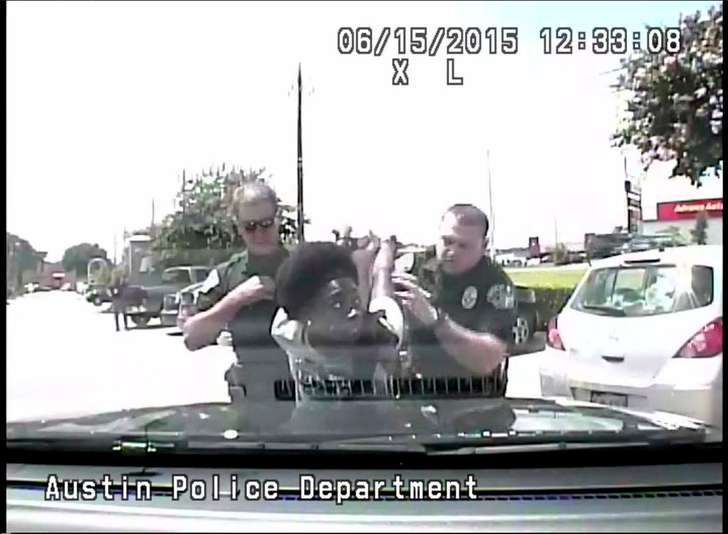 Officials in Austin have opened an investigation on a police officer’s violent arrest of a black woman during a traffic stop. They are also investigating a second officer’s racist comments to her.

The June 2015 incident was previously unreported, but dashcam video was released this week.

The video shows officer Bryan Richter pulling up behind Breaion King, a 26-year-old woman, to ticket her for going 15 miles over the limit. King had just parked her car and was exiting to walk into a restaurant. The officer asks to get back into the car and to close her car door completely and within seven seconds begins physically removing her from the car. He then throws her to the ground twice and pushes her against the hood of the patrol car.

Richter wrote that he escalated the situation because King had an “uncooperative attitude.”

As King was being taken to jail, a second officer, Patrick Spradlin, had a conversation with her about racism and the way white and black people interact.

Why are so many people afraid of black people? I can give you a really good — a really good idea why it might be that way: Violent tendencies.
…
I’m not saying anything, I’m not saying it’s true—I’m not saying that I can prove it or nothing. But 99 percent of the time, when you hear about stuff like that, it is the black community that’s being violent. That’s why a lot of the white people are afraid and I don’t blame them.
…
But yeah, some of them, because of their appearance and whatnot, some of them are very intimidating.

Police Chief Art Acevedo released a public apology to King, addressing the actions of both officers.

I’m sorry that on the day that you were stopped for going 15 miles per hour, you were approached in a manner and treated in a manner that is not consistent with the expectations of this police chief, of most of the officers of this police department, and most importantly I think of all of us as human beings.
…
We need to help our community overcome the fear or reluctance, which I understand, to file a complaint. This is critical if we are to weed out bad officers and bad behavior.
…
When we don’t come forward, everyone loses and it just saddens me that something I’m not doing or something that I’m doing, for over a year we didn’t hear from Miss King.

He went on to call Spradlin’s comments as racist, saying, “I can’t denounce what he had to say any stronger.”

Both officers are on administrative duty during the investigation.

How Christians Should Engage this Election